The US has formed a special action group to review and coordinate all Iran-related activity. German rail operator Deutsche Bahn and Deutsche Telekom are among companies ending business in Iran in light of US sanctions. 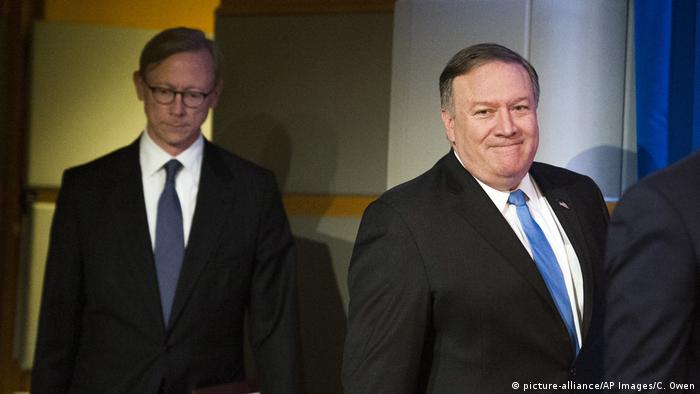 US Secretary of State Mike Pompeo on Thursday announced the formation of a so-called Iran Action Group aimed at increasing efforts to put additional diplomatic and economic pressure on Iran.

"The Iran Action Group will be responsible for directing, reviewing and coordinating all aspects of the State Department's Iran-related activity, and will report directly to me," Pompeo said.

It will be headed by current Director of Policy Planning Brian Hook as the State Department's special representative for Iran.

Hook was in charge of the failed attempts earlier this year to gain the support of US allies for Washington's decision to pull out of the Iran nuclear deal. The deal was regarded as a diplomatic success when it was reached in 2015 and called on Iran to give up its nuclear weapons program and agree to a strict monitoring program in exchange for the lifting of crippling international sanctions.

The new US body's formation comes after  Washington reimposed sanctions of Iran in an effort to force Tehran to end its nuclear weapons program, halt support for militant groups in the Middle East and free detained American citizens.

The US has said it would only end the sanctions if Iran agreed to negotiate a new deal, but Iran and other signatories to the agreement, Britain, France, Germany, Russia and China, have been working to find a way to save the acord, despite the actions of the United States.

Following the US decision to impose further sanctions on Iran, German rail operator Deutsche Bahn and Deutsche Telekom announced they would be ending projects in the country.

A number of European companies have paused plans to invest in Iran due to the US sanctions, including oil giant Total as well as carmakers PSA, Renault and Daimler.

State-owned Deutsche Bahn is involved in two projects in Iran through its subsidiary DB Engineering&Consulting, a spokeswoman said on Thursday.

"Both projects will be ended in August and September 2018," she said. "Due to the altered banking environment, we have sought to bring the contract to an amicable and timely conclusion."

Deutsche Bahn signed a memorandum of understanding with Iranian rail operator Bonyad Eastern Railways (BonRail) in May 2017 for the first project, which was to identify potential areas where the Iranian firm could improve it services.

The second project, which began around 18 months ago, was a consulting contract for Iranian state railway RAI, whch included restructuring the company, the spokeswoman said.

Detecon, a subsidiary of T-Systems — Deutsche Telekom's IT services arm — has also ended its business in Iran, a spokesman said.

Detecon is a consultancy that works with companies in the telecommunications industry.

"Given the sensitivity in relations with Iran worldwide, Detecon ended its business in Iran with immediate effect in mid-May 2018."

Telekom's statement came not long after the announcement that its US unit, T-Mobile, would be buying Sprint in a $26 billion deal that is yet to be approved by US regulators.

A day after the US pulled out, Chancellor Angela Merkel reaffirmed that Germany and other EU nations support the agreement. But can the European Union offer Iran enough guarantees to convince leaders to stay the course? (09.05.2018)

EU Commission President Jean-Claude Juncker announced that the bloc plans to kickstart a 1996 law that would prohibit European companies from complying with US sanctions on Iran. (17.05.2018)

Trump's decision to reimpose a range of economic sanctions on Tehran puts German and EU firms in a tough spot. It seems that their plans for doing business in Iran have to be shelved. (06.08.2018)