Trump's ploy to force countries to choose between doing business with the US or Iran is working. While German firms in Iran have been preparing for months for the sanctions, the outflow of companies is not slowing down. 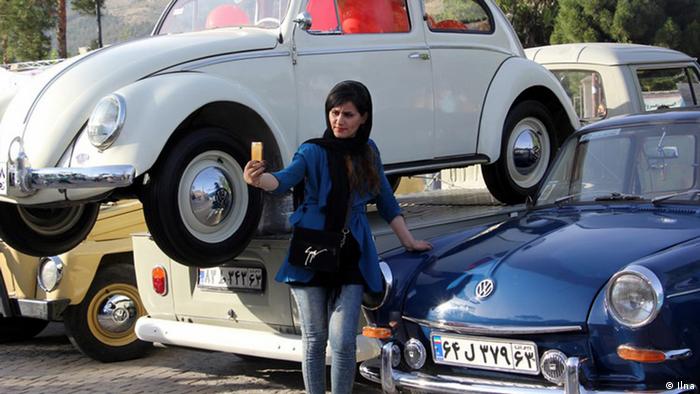 In May, the US pulled out of the Joint Comprehensive Plan of Action agreed by the Obama administration in 2015 to lift economic sanctions in return for Tehran limiting its nuclear activities and allowing international inspectors to examine its nuclear sites.

To avoid exposure to US secondary sanctions, foreign firms have been advised to use the time period to wind down activities with or involving Iran.

The focus is on "bottleneck sectors" — areas where there is little or no way to avoid a US connection, including aviation, insurance, shipping, logistics, and especially banking. This means many German companies are caught in the crosshairs.

The EU has responded to the sanctions by updating a Blocking Statute to protect EU companies doing business with Iran from the impact of US sanctions. 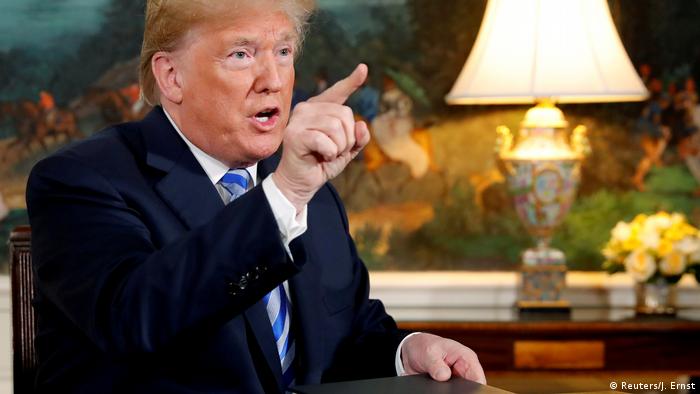 But the EU signatories to the  deal — Germany, France and the UK — have failed so far to convince US President Donald Trump not to reimpose sanctions, or to persuade him to grant waivers for EU-based companies doing business with Tehran.

Many observers expect many more big firms to leave Iran. "We expect almost all of the European and Japanese companies along with major Korean companies to leave Iran," Sara Vakhshouri, the president of SVB Energy International in Washington DC, told DW.

"This will have a negative impact on Iran's economy and manufacture processes of different industries. On the other hand, Chinese and Russian companies will benefit from lack of competition in Iran but we shouldn't forget that under the nuclear sanctions, Chinese companies took over many projects but most of them remain uncompleted."

Read more: Germany wants Europe to form a 'counterweight' to US

"Now, I think, we should be looking to see what small and medium-sized enterprises look to get into Iran.  They will be the only ones in Europe, I think, that will risk sanctions if they can find payment mechanisms that work," Richard Nephew, an adjunct professor at Columbia University, told DW.

Germany's role in Iran under threat

Many of Germany's biggest businesses are working with Iran, as are hundreds of the country's medium-sized firms, and Germany remains Iran's biggest trading partner. In 2015, when the Iran deal was reached, German exports grew 27 percent. In 2017, German exports to Iran were worth an estimated €3.5 billion ($4.2 billion).

Berlin has said it will help German companies stay in Iran after the US decision to reimpose sanctions. Foreign Minister Heiko Maas said last week that Berlin, Paris and London were working on a payment system with Iran that could allow the continuation of business transactions after US sanctions start.

But the major German companies to withdraw or scale back their activities in Iran include: 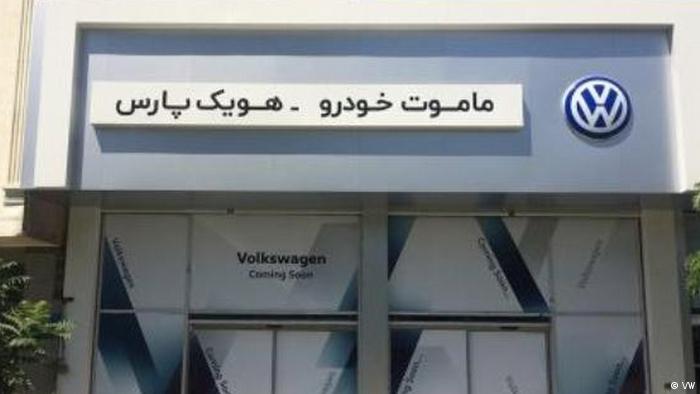 VW has been in Iran a while

Volkswagen: This week the German car giant appeared to bow to American pressure, according to Richard Grenell, the US Ambassador to Germany. VW would reportedly still be able to do some business in Iran under a humanitarian exception. VW has scrapped plans it announced in July last year to sell cars in Iran for the first time in 17 years. VW's Iran operations are small and contribute little to its turnover, with local partner Mammut Khodro holding a 4 percent market share. Its turnover in North America was €38.8 billion in 2017 by comparison.

Daimler: The carmaker has suspended activities in Iran "until further notice according to applicable sanctions," according to a company statement. It has not resumed the production or sale of Mercedes cars or trucks in Iran. But Daimler had little business there to begin with. Teaming up with Iran Khodro Industrial Group, the region's biggest carmaker, it had targeted a goal of becoming market leader in commercial vehicles and trucks, but financing hindered these plans. Daimler sells no more than a few hundred vehicles per year, compared to 10,000 at its Iranian peak.

Commerzbank, Deutsche Bank, DZ Bank: Commerzbank said recently it now has no business relationship to customers in Iran. Germany's second-largest bank was fined €1.45 billion in 2015 by US authorities and Deutsche Bank was fined €258 million for its own Iran operations. Deutsche Bank has "no interest in Iran transactions … this hasn't changed," a spokesperson told Handelsblatt newspaper. DZ Bank halted financial transactions with Iran as of July 1, including foreign payment transactions.

Airbus: The Franco-German plane maker and its US rival Boeing face a major challenge. About 10 percent of its plane parts come from US suppliers, like United Technologies, Rockwell Collins and General Electric, which puts the delivery of 95 planes in its order books in jeopardy. Airbus said it will analyze the effect of US sanctions before making a decision.

Siemens: Siemens Corporation, which manufactures healthcare, industry, energy and automobile products, has said it will no longer take new orders from Iran and will wind down its business interests there. The Munich-based company said it would take appropriate steps "to bring business activities in Iran in line with the changing multilateral situation." Siemens said a report by monthly Manager Magazin that it might cut 20,000 jobs as part of its Vision 2020+ strategy was "completely unfounded." In 2017, the engineering conglomerate booked €130 million worth of business with Iran. "We will complete what we have started, within the legal guidelines," CFO Ralf Thomas said. The question is whether Siemens will be able to secure future contracts.

BASF: BASF has made a commitment to comply with all US sanctions against Iran, which means it will have to steer clear of Iran's oil and gas industries, its main interest in the country, where the company had hoped to invest through its oil exploration subsidiary, Wintershall. A spokesman for BASF told the French news agency AFP on Thursday that it "will continue to do business in Iran and obey all legal rules and regulations." He added that "around half" of the 80 million euros ($93.5 million) in revenue BASF earned in Iran last year came from sectors — energy, automobiles and petrochemicals — affected by American sanctions. The Ludwigshafen-based group's business with the country represents a tiny fraction of its €64.5 billion in annual turnover. BASF generates a quarter of its revenue in North America.

Allianz: The insurance giant is identifying Iran-related business and developing wind-down plans in response to the sanctions.

Munich Re: The world's biggest re-insurance company has said it would withdraw from Iran in case of sanctions so as not to risk its larger US activities.

Deutsche Telekom: In May DT terminated business in Iran that was previously conducted via a subsidiary, Detecon. It said its activities have expired in Iran because of the new sanctions. Its Iran turnover this year was around €300,000. Speculation is that DT wants to avoid giving the US authorities a pretext to halt a merger between the US subsidiary of T-Mobile and Sprint.

Deutsche Bahn: A spokeswoman for Deutsche Bahn said the company will no longer work on plans to improve services at the Iranian railway company Bonyad Eastern Railways (BonRail) after cooperation expires this month. Deutsche Bahn is currently involved with its subsidiary DB Engineering & Consulting in two projects in Iran, but many international banks are now refusing to handle major financial transactions with the country. In May 2017, the company signed a Memorandum of Understanding (MoU) with BonRail for the first project. The second project involved a consultancy contract for the Iranian state railway, RAI.

Hapag-Lloyd: The shipping line Hapag-Lloyd has halted one of two feeder services to Iran and will decide on the remaining one before the November 4 deadline imposed by the US. Hamburg-based Hapag-Lloyd, the world's fifth-largest container company, said it did not have any direct services handling Iran volumes of its own, using partners instead.

Herrenknecht: The world leader in mechanized tunneling technology has been closely associated with business in Iran. Two of its machines were used to build Tehran's metro system, a decade-long project that carried on even through the last round of sanctions. A spokesperson said recently that the company has always followed relevant national and European rules, "and we will continue to do this in future."

Henkel: Even before the Iran deal, consumer goods company Henkel had almost completely withdrawn due to political considerations.

Samson: Samson, which specializes in control valves, has been active in Iran for 40 years.

Dürr: The German automotive supplier halted its activities in Iran in August.

France's Total had signed up last year to a $4.8 billion Iranian gas field project. However, it was forced to backtrack after the US threatened to impose penalties on any business found still doing business with Iran. (21.08.2018)

Germany’s foreign minister has reiterated calls for the EU to free itself from dependence on the US and adopting its own international payments channel is one way of doing that. But is he barking up the wrong money tree? (27.08.2018)