The Iranian president has been summoned before parliament for the first time since he assumed office in 2013. Under pressure from allies and rivals alike, Hassan Rouhani has pledged to defeat reimposed US sanctions. 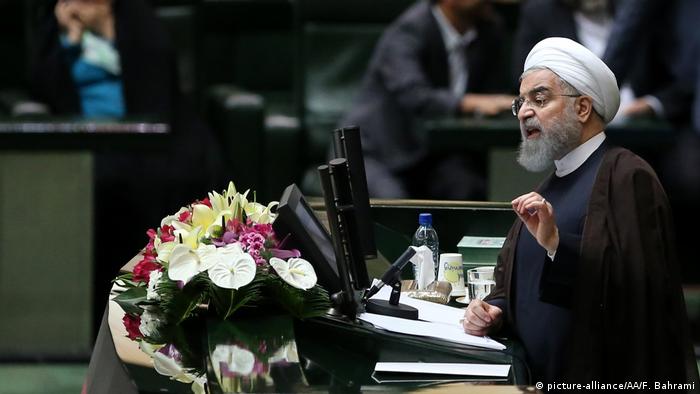 Iranian President Hassan Rouhani appeared before parliament on Tuesday, marking the first time he has been summoned by lawmakers since he assumed office in 2013.

Rouhani is under pressure from hardliners and even some in his reformist camp to reshuffle his cabinet over widening economic fallout from the US decision to withdraw from the Iran nuclear deal.

Here's what he said:

US sanctions: Earlier this month, the US re-imposed a first-round of sanctions against Iran over Tehran's alleged failure to abide by a nuclear deal. US President Donald Trump earlier this year withdrew the US from the agreement, stunning allies who had negotiated the diplomatic milestone.

What is the Iran nuclear deal? It is an international accord with Iran, which was finalized in 2015 by several world powers, including Germany and the United States. Under the deal, Tehran curbed its nuclear program in exchange for an easing of sanctions, which were imposed amid fears that the Islamic republic was seeking to develop a nuclear arsenal.

Who is Hassan Rouhani? In Iran, Rouhani is a reformer who won the 2013 and 2017 presidential elections. Unlike his predecessor, Mahmoud Ahmadinejad, Rouhani had encouraged dialogue with the international community, including the US. His government helped negotiate the now-fragile nuclear deal, once considered a masterpiece of 21st century diplomacy.

Why is Rouhani under pressure? In the wake of the Iran deal, the Islamic republic once again opened its doors for international business. However, after the US withdrew from the nuclear deal and threatened penalties against countries that did business with Iran, the country has seen its currency nearly collapse, international companies pull out, rising unemployment and corruption spread.

Hardliners have called on Rouhani to reshuffle his government, with even some within his camp arguing for similar measures. On Sunday, the Iranian parliament impeached then-Economy Minister Masoud Karbasian, striking a major blow to Rouhani and his reformist agenda.

What happens next? Parliament referred the case to the judiciary, a display by lawmakers that they were unsatisfied with Rouhani's responses to their questioning, according to the private Iranian news agency Tasnim.

Iran has been in economic turmoil since US President Donald Trump announced he would withdraw from an international deal that lifted sanctions against Iran's economy. The measures were reintroduced Tuesday. (06.08.2018)