Iran's currency drops 14 percent in one day on sanctions fears

The Iranian rial has hit a new record low, dropping past 100,000 rials to the US dollar. The currency is down 50 percent since April — just before the US pulled out of the 2015 nuclear deal. 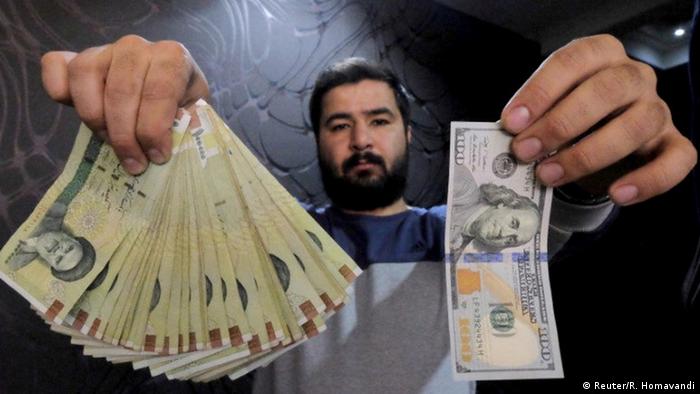 Iran's currency hit a record low on Sunday of 100,000 rials to the dollar as concerns grow of a deepening economic crisis due to the imminent return of full US sanctions.

The Iranian rial fell to 112,000 to the dollar from 98,000 a day earlier on the thriving currency exchange black market, according to Bonbast, one of the most reliable sites for tracking the currency.

The rial has lost half its value against the dollar in just four months, having broken through the 50,000-mark for the first time in March.

The currency started its latest freefall a month before US President Donald Trump pulled out of the 2015 Iran nuclear deal, in which six world powers lifted sanctions on Tehran in return for the curtailment of its nuclear program.

Washington is to reimpose its full range of financial measures in two stages on August 6 and November 4, forcing many foreign firms to cut off business with Iran.

The US has also told countries they must halt imports of Iranian oil from Nov. 4 or face their own US sanctions.

Iran is also experiencing a deep economic crisis which is likely to worsen if its oil exports fall by as much as two-thirds by this year, due to the revived measures.

The economic uncertainty has forced more Iranians to turn to dollars as a safe way to store their savings. It has also triggered street protests and a public outcry over alleged profiteering and corruption.

The central bank, meanwhile, has blamed "enemies" for the lack of confidence in the currency and a rapid rise in the prices of gold coins.

Iran's president hit back at Trump's sanctions, by threatening to close the Strait of Hormuz, a shipping lane through which 20 percent of the world's oil passes.

The official government-set exchange rate is 44,070 to the dollar, compared to 35,186 on January 1. But banks often refuse to sell their dollars at the artificially low rate, which has heightened doubts about the currency's stability.