Venezuela's opposition leader Juan Guaido has made a new push to oust President Nicolas Maduro, claiming he has the backing of parts of the army. As protesters face off with security, the world reacts. 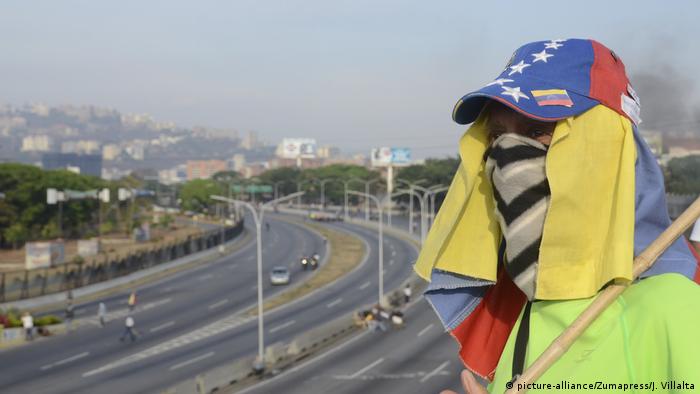 The US White House led support for Venezuelan self-declared President Juan Guaido's push for a military uprising against interim President Nicolas Maduro on Tuesday, while Maduro's international backers condemned the push as a coup.

The Trump administration was quick to voice support for Guaido, after leading a mounting pressure campaign since Guaido declared himself interim president in January.

Various officials urged the military to stand by the country's "legitimate institutions," while Secretary of State Mike Pompeo wrote on Twitter that "democracy cannot be defeated."

National Security Adviser John Bolton said that those who stayed with Maduro would "go down with the ship."

Acting White House Chief of Staff Mick Mulvaney rejected comparisons with George W. Bush's 2002 support for a coup against the former leader Hugo Chavez, saying the US did not consider the current uprising to be a coup.

Colombian President Ivan Duque followed suit, rejecting Maduro as a dictator and calling for "soldiers and the people of Venezuela to place themselves on the right side of history." Millions of Venezuelans have left for neighboring Colombia in recent years.

Brazil's far-right President Jair Bolsonaro echoed characterizations of Maduro as a dictator who had "enslaved" Venezuelans and said he was on the side of Guaido.

German Foreign Minister Heiko Maas, who was in Brazil on Tuesday, said Germany's support for Guaido "had not changed" but argued for a political rather than military resolution.

Germany is one of 54 countries to recognize Guaido's role as interim president and called for new elections, but it has not declared Maduro's presidency invalid.

A European Commission spokeswoman declined to comment on the unfolding situation but reiterated the bloc's calls for "free and fair elections" and a "political and peaceful solution".

Chile, Spain and the United Kingdom reiterated support for Guaido, and Mexico joined them in urging a peaceful solution.

On the other side, Turkey has joined Russia, Bolivia, Nicaragua and Cuba in condemning the new push to oust Maduro, calling it a military coup.

Russia's Foreign Ministry accused the Venezuelan opposition of trying to draw the armed forces into clashes by resorting to violence.

President Vladimir Putin has long counted Maduro as a close ally in Latin America and Russia has soldiers stationed there, although Russian news agencies have said they have not been involved in the clashes.

Turkey's president, Recep Tayyip Erdogan, called the events a "coup attempt," while Foreign Minister Mevlut Cavusoglu said they amounted to a challenge to the country's constitutional order. Cavusoglu urged Venezuela to settle its problems through dialogue.

Bolivia's Evo Morales "vigorously" condemned the "attempted coup in Venezuela by the right-wing that is beholden to foreign interests," urging "brother" Maduro to "beat this new attack by the empire [the US]."

"The traitors that have put themselves at the head of this subversive movement are using troops and soldiers with heavy weapons in a public area of the city to create panic and terror," he said.

Guaido has called for "the largest march in Venezuela's history" on Wednesday, May 1.

Armed vehicles plowed into protesters Tuesday after security tried to disperse them with tear gas, as demonstrators threw projectiles and Molotov cocktails. Two people were rushed to the hospital.