In a provocative tweet, the US president described retaliation that would mark "the official end of Iran." Iran has remained defiant, saying "genocidal taunts" would not be enough to destroy the country. 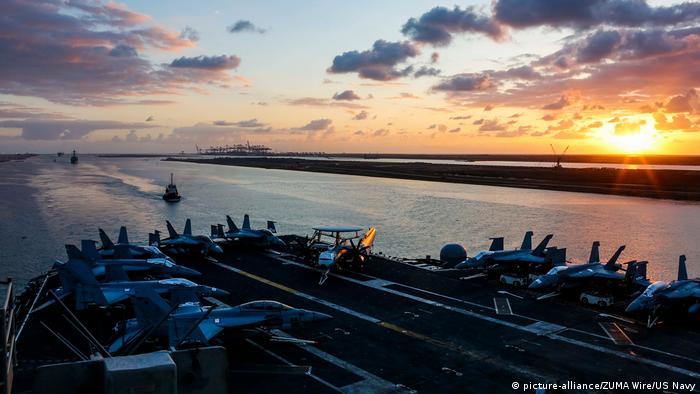 US President Donald Trump issued a stern warning to Iran on Sunday amid rising tensions between Washington and Tehran.

"If Iran wants to fight, that will be the official end of Iran," said Trump. "Never threaten the United States again!"

The tweet appeared to be one of Trump's most overt threats against Iran since taking office. Over the past month, the US has taken an increasingly aggressive position towards Tehran.

Washington last week deployed an aircraft carrier, bombers, an assault ship and a Patriot missile battery to the Persian Gulf to combat what it describes as Iranian "threats," prompting concerns of a military encounter.

Iran responded on Monday with defiance. Foreign Minister Javad Zarif said in a tweet that Trump would fail to destroy the country, just as Alexander the Great and Genghis Khan had in the past.

In another tweet, Zarif said what he called the "B Team" — a group of anti-Iran hard-liners that includes US National Security Adviser John Bolton, Israeli Prime Minister Benjamin Netanyahu and Saudi Crown Prince Mohammed Bin Salman — was empowering the very military-industrial complex that Trump claims to oppose.

Tehran has also downplayed the threat of open conflict with the US, with Zarif saying Saturday that Tehran was not seeking armed escalation with US or its regional allies.

"We are certain," Zarif said. "There will not be a war since neither we want a war nor does anyone have the illusion they can confront Iran in the region."

However, a commander of Iran's elite paramilitary organization, the Revolutionary Guard, offered a different message on Sunday.

US soldiers would be "easy to defeat," said Commander Hossein Salami in a statement.

Saudi officials have accused Iran of undermining regional security, saying it could be behind recent attacks on cargo ships in the Persian Gulf.

"We want peace and stability in the region, but we won't stand with our hands bound," said Saudi Foreign Minister Adel al-Jubeir said Sunday.

The US has sought to isolate Iran internationally by pressuring allies to withdraw from the 2015 nuclear deal and sanction the regime.

Germany: 'No one wants war with Iran'

US President Joe Biden signs series of orders, including rejoining Paris climate accord 5h ago

German Chancellery: 'Very, very good sign' that Biden will rejoin WHO 6h ago