Washington ratcheting up pressure on Iran has some observers worried a war could break out between the two nations. But for others, it simply shows President Donald Trump's contradictory approach to foreign policy. 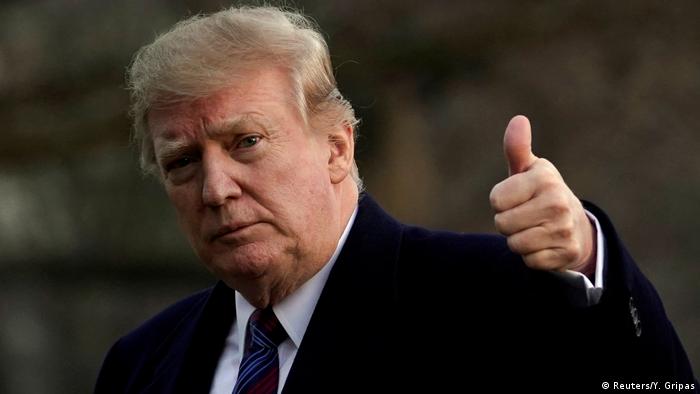 After recently deploying an aircraft carrier strike group to the Middle East, US President Donald Trump's administration this week rattled observers, including traditional partners of the US, when it ordered the evacuation of all nonessential staff from its embassy in Baghdad due to unspecified security concerns related to Iran. The validity of those apparent threats could not be confirmed by US allies on the ground in Iraq.

The evacuation has heightened worries of a potential conflict with Iran, particularly as it is part of the Trump administration's increasingly tough stance vis-à-vis Tehran. That includes Washington's exit from the US-negotiated nuclear deal with Iran a year ago and increasing sanctions.

The highly visible role of Trump's national security adviser, John Bolton, in the administration's Iran policy has only exacerbated concerns about a possible military confrontation with Tehran. Bolton had announced the deployment of the aircraft carrier group and ordered the update of military plans that would reportedly send as many as 120,000 troops to the region. Bolton has long been known for his bellicose views and had openly advocated military action and regime change in Iran and North Korea before joining the Trump administration.

The administration's increasingly confrontational posture can partly be explained by the departure of former Pentagon chief James Mattis, a highly respected military leader who was widely considered a key counterweight to an impulsive president and an aggressive Bolton, said Thomas Wright, director of the Brookings Institution's Center on the United States and Europe.

"[Acting Defense Secretary] Patrick Shanahan is much weaker than Mattis and has no real desire to push back, and also will give the White House and the National Security Council what it wants in terms of exploring military options and generally not try to stonewall the White House," said Wright. "So I think that has changed the dynamic."

"Absolutely not," countered James Jay Carafano, vice president for national security and foreign policy at the Heritage Foundation. "There never was a Trump whisperer. There never was an axis of adults that was keeping Trump in check."

Carafano argued that the president gets advice from many people but ultimately makes his own decisions. "Trump is the decider in chief," he said. 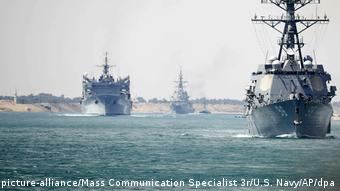 The US deployed an aircraft carrier group to the Persian Gulf

Bolton at odds with Trump?

Wright concurred that Trump remains the most important person shaping the administration's foreign policy, but he contended that Bolton aims to manipulate the president to advance an interventionist agenda, which is not necessarily shared by Trump, who likes to push the envelope but is averse when it comes to entangling the US in another war.

Trump told reporters last week that Bolton had "very strong views on things," and "I temper John, which is pretty amazing," a sign of possible discontent with his adviser. That discontent with Bolton, who is the third person to serve as Trump's national security adviser, is echoed by recent media reports noting that the president has grown frustrated with what he perceives as Bolton's overly aggressive course toward Iran. Trump has disputed this on Twitter, but also expressed his willingness for direct talks with Tehran, a move Bolton would likely view as futile.

Trump's recent comments about Bolton underscore the tenuousness of his position in a White House that is routinely reshuffled, noted the scholars. "Bolton is going to support Trump, or he is going to be looking for another job," said Carafano. "It could end with Trump actually forcing out Bolton if he feels like he is manipulating him into a conflict," said Wright. 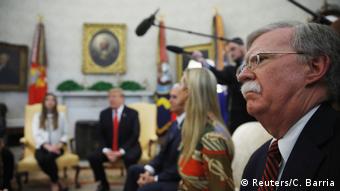 President Trump does not like to be upstaged by advisers, including John Bolton

Trump, who repeatedly criticized the US invasion of Iraq, has a deep-held aversion against sending troops into a major armed conflict. That conviction, coupled with Tehran's reluctance to trigger US military action, make a confrontation "a little less likely than people think," said Wright, an assessment shared by Carafano. But, Wright added, despite a common interest in Washington and Tehran to avoid a military escalation, an armed confrontation is still "worryingly possible because it could be inadvertent."

While the standoff with Tehran continues developing, it provides an insight into the Trump administration's foreign policy plan. The US approach appears to follow the earlier North Korea blueprint: saber-rattling followed by a presidential offer to talk.

For Wright and Evelyn Farkas, a former deputy assistant secretary of defense under President Barack Obama and now a fellow at the German Marshall Fund, that approach is indicative of a more significant problem.

"I have to think that the reason there is no process, no strategy and — from what I hear and see — no one to coordinate things, is because the president himself does not want a strategy," she said. "He does not operate that way; he just does things by instinct. That's not the way you run a country's foreign policy and not the way you address national security threats."

The Trump administration does have a clear foreign policy strategy, and it is the goal "to exercise enough power and influence to force our competitors to respect America's vital interests," said Carafano. What really unnerves people, he offered, is not so much a perceived lack of strategy, but that Trump is such an "unconventional diplomat."

Facing threats from Washington and Tehran, the European Union keeps calm and claims the middle ground when it comes to the Iran nuclear deal. Despite a tight deadline, many say there's time for a diplomatic solution. (09.05.2019)