The United States claims militia with ties to Iran are planning attacks against its personnel in Iraq. Whether true or not, tensions between Iran and the US are putting Iraq in a tough position. 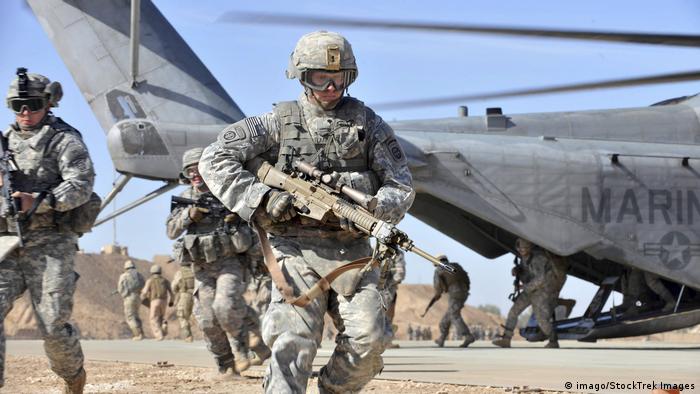 The United States on Wednesday ordered all non-essential American diplomatic personnel out of Iraq amid heightened tensions with Iran.

The Trump administration labeled the IRGC a terrorist group last month despite warnings that the move could endanger US personnel in the region, particularly in Iraq and Syria. Iran subsequently labeled US Central Command, which oversees US military operations in the Middle East, a terrorist organization.

Over the past few weeks, the US has made several provocative moves that could be perceived by Iran as a potential imminent military threat at a time when the US has already engaged in economic warfare.

In early May, Trump's hawkish US national security adviser, John Bolton, made a show of an already scheduled US aircraft carrier group deployment to the Persian Gulf and announced a B-52 bomber force would be sent to the region.

Days later, the Pentagon added a Patriot missile defense battery and an amphibious assault ship to the deployment. The New York Times reported the Trump administration has considered plans to position 120,000 troops in the region.

US Secretary of State Mike Pompeo, who as a congressman in 2014 once called for hundreds of airstrikes on Iran instead of pursuing diplomacy to reach the Iran nuclear deal, has said Washington doesn't want war. Iran's Supreme Leader Ayatollah Ali Khamenei has also said the Islamic Republic doesn't want a conflict.

In recent days, there have been allegations of Iran sabotaging oil tankers in the United Arab Emirates and drone attacks by Yemen's Iranian-allied Houthi rebels on a Saudi oil pumping station.

Iraq caught between Iran and US influence

Concern is growing that an incident — whether intentional, accidental or staged — could trigger an uncontrollable escalation into a devastating regional war.

The tensions have forced Iraq to manage an already tricky balancing act as a neighbor of Iran and security partner of the United States, which has around 5,000 troops in the country.

"Iraq has been in a very difficult situation in recent years because it is very closely associated with both the Americans and Tehran," said Guido Steinberg of the German Institute for International and Security Affairs in Berlin.

Iraqi Prime Minister Adel Abdul-Mahdi has said he has not observed any signals that there was a threat emanating from Iran, contradicting US claims. "We made it clear to the Americans that the government is fulfilling its duty to protect all those involved."

Iran wields influence in Iraq through its economic footprint and extensive ties to Iraqi political groups, Shiite militias and the country's elite. Tehran views the US military presence at its doorstep in Iraq as a threat and challenge to its influence in Baghdad.

That view was strengthened when Trump said earlier this year that it was important to maintain a US military presence in Iraq to "watch Iran," prompting sharp criticism from Iraqi officials.

Although Iraq tends to consider the views of Tehran, it has tried to prevent an escalation of the conflict between both parties on Iraqi soil, according to Steinberg.

"It would be a political catastrophe for Iraq if it really comes to attacks, especially because it could lead to American retaliatory attacks, possibly against Iranian-controlled militias in Iraq," he said.

In any military conflict, the Iraqi government would seek to remain neutral, said Manaf Musawi, head of the Strategic Studies Center in Baghdad. But large sections of the security forces and Shiite militias, as well as parts of the population, would oppose the US, according to Musawi.

Although the United States has called on the Iraqi government to control the Shiite militias, former US diplomat Nabeel Khoury believes this could lead to a civil war in the country.

"Taking away arms from the Shiite militias would lead to conflict in Iraq. The attempt to disband these militias and fold them into the Iraqi army has failed," said Khoury, who is now at the Chicago Council on Global Affairs.

If it chose to, Tehran might be tempted to attack US forces in Iraq indirectly using Iraqi militias deploying irregular tactics rather than face overwhelming US military power directly.

"We should not expect big battles to take place between large units. A more likely scenario is that pro-Iranian militias act indirectly, for example by launching rockets or mortar shells at American bases. They have no chance in direct battles against US troops," Steinberg said.

Distrust of US lingers

It's still unknown whether US warnings of Iranian attacks are real, fabricated or a selective use of intelligence by Iran hawks in the Trump administration.

Parallels with the US-led war with Iraq in 2003 come to mind. In the aftermath of the 9/11 attacks on New York and Washington, the US made specious claims about Iraq's support for al-Qaida and pursuit of weapons of mass destruction, all of which turned out to be false. Figures such as Bolton were major players in justifying the war with Iraq. Since then, distrust of Washington is strong in the region.

One thing is clear: a military conflict would leave Iraq caught in the middle.

"Trump does not want to go to war; it would be destructive for everyone. But provocative rhetoric is always followed by mobilization, and mistakes can happen," said Khoury. "The United States is going through a very strange time with a very unusual administration. It's difficult to predict anything."

Chase Winter contributed to this report

Every evening, DW sends out a newsletter with a selection of the day's news and features. Sign up here.

Critics say that Iran's Islamic Revolutionary Guards Corps has been involved in terror-related activities and rights abuses. They are however divided whether its designation as a "terrorist group" is the right decision. (09.04.2019)

John Kerry calls on EU to reduce emissions within 10 years