The world is on edge over heightened tensions between the US and Iran. But that doesn't mean military confrontation is imminent, writes Rainer Hermann of the German daily Frankfurter Allgemeine Zeitung. 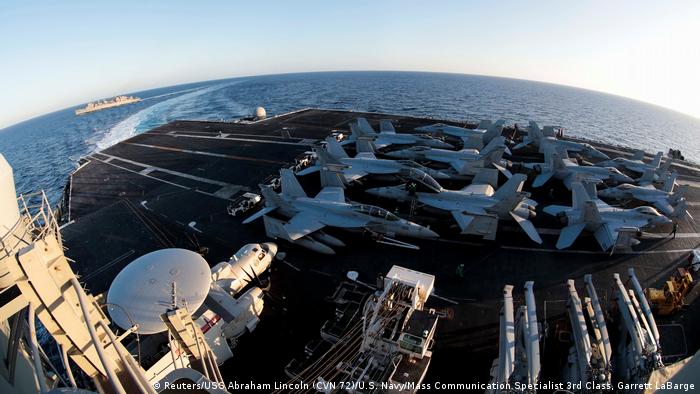 Chances of war between the US and Iran are low, despite the fact that Washington has sent a carrier group to the Persian Gulf, and that Tehran has given European partners 60 days to save the nuclear deal. Sure, tensions between the two countries are mounting, but the naval hardware that was already on its way to the Indian Ocean only to be redirected to the Gulf is not enough for a major operation. At the same time, Iran is sticking to its desire to negotiate. It's likely Iran's President Hassan Rouhani will grant an extension to his 60-day ultimatum.

Neither side wants war

Taking both sides' interests into account, war seems even less probable. US President Donald Trump has tied himself to a promise of bringing home US troops from the Middle East. It seems he has learned from his predecessors and isn't ready to oversee a new war that has no clear exit without sustaining major losses. That's why he has stuck to a strategy of threats — at times excessive ones — as a means of getting Iran to take his "deal."

Meanwhile, Iran is not an adventurous country. Its foreign and security policies are predictable, even if often diametrical to Western interests. Iran responds to its opponents' weaknesses, such as in the Arab world, and strengths, such as American pressure. At most, Tehran is ready for a calculated escalation. Its position in the current conflict is one of weakness: American forces best Iranian ones, and its economy is in the basement.

Given the circumstances, there is a danger of both sides pushing escalation past a point of no return. And John Bolton, Trump's National Security Advisor, already got one war he wanted in 2003. He's known for his hard-line position on Iran: If you want to keep them from the getting the Bomb, you have to bomb them. He has sought aggressive regime change, although it's unclear what would happen after that.

At the same time, Iran's hardliners could push to restart the country's nuclear program. That would be music to the ears of hawks in the US, Saudi Arabia and Israel.

The big question is then the conditions under which the two sides would be willing to renegotiate. On Thursday, Trump suggested that all the Iranian government has to do is pick up the phone and call. That was quickly rejected in Tehran. But both sides have shown willingness to come to the table — whether it's Trump's two meetings so far with North Korea's Kim Jong Un or the late Supreme Leader Khomeini signing a peace deal with Iran's arch enemy, Iraq, in 1988.

Altogether, war is still a possibility, but many more options remain on the table before it becomes inevitable.

European powers responded with caution to Tehran's decision to abandon parts of the 2015 nuclear deal. In the US, President Trump imposed fresh sanctions on Iran's crucial metal exports, but he also hinted at a deal. (08.05.2019)

Opinion: Mariupol — a symbol of Ukrainian courage and Russian shame 1h ago