Saudi Arabia has vowed to try and prevent a Middle East war, but if conflict breaks out it will defend itself "with all force and determination." This comes amid a recent spike in tensions with regional rival Iran. 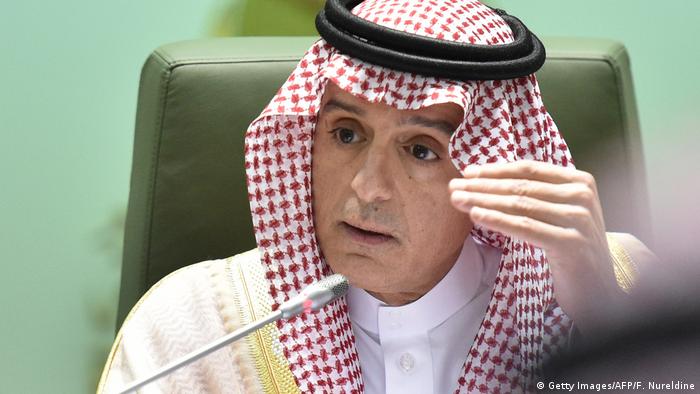 The Saudi minister of state for foreign affairs said on Sunday that the kingdom does not want war, but it will defend itself if necessary.

Adel al-Jubeir told reporters: "We want peace and stability in the region, but we won't stand with our hands bound."

Al-Jubeir's comments came less than a week after Riyadh claimed that two oil pumping stations — which increase pressure to move oil through a major Saudi pipeline — were hit by armed drones, resulting in a fire at one of the stations and a temporary shutting of the oil line as a precaution.

Saudi Arabia's East-West pipeline is an alternative export route for the kingdom's crude oil in the event of the strategically important Strait of Hormuz being blocked. Iran has repeatedly threatened to close the strait if a military confrontation with the United States were to break out.

Houthi-run Masirah television said after the May 14 pipeline attack that the Iran-linked group had launched drone attacks on Saudi installations in response to what it called Saudi aggression and a blockade on Yemen, where a Saudi-led alliance has been at war with the Houthis and their allies since 2015. Saudi Arabia and Iran are also on opposite sides of the war in Syria.

Saudi Arabia also said that two of its oil tankers were targeted in a "sabotage attack" off the coast of the United Arab Emirates (UAE) on May 12. The UAE is investigating the alleged attack near its waters.

Tehran denied involvement in either operation.

Iran is not pursuing war, the head of the country's elite Revolutionary Guards said on Sunday, according to a report by the Reuters news agency which cited Iran's Fars news agency.

Meanwhile, Saudi Arabia will host key crude producers in Jeddah later on Sunday to discuss how to stabilize a volatile oil market amid the rising tensions in the Persian Gulf. Ministers from major oil-producing countries plan to meet in the kingdom on Tuesday.

Inside Europe: In the crossfire between Tehran and Washington