American sanctions are supposed to paralyze Iran's economy and put pressure on the government. But their far-reaching effects are blocking societal progress and leading to greater oppression. 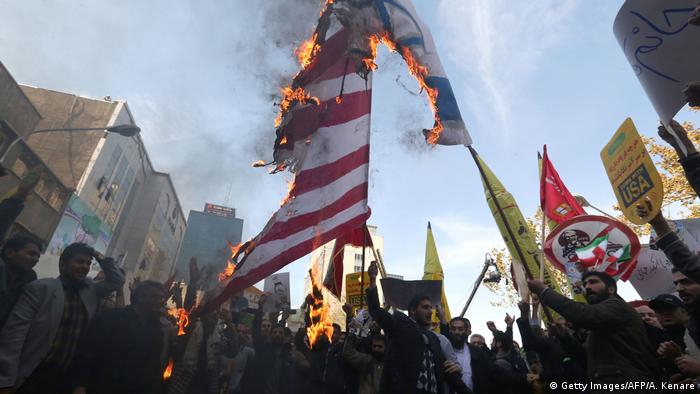 Bahareh Hedayat can't see any sense in America's policy. "The United States has been imposing sanctions on one country or another for 50 years: Cuba, Libya, Iraq, Iran, North Korea. Where, in which country, has it achieved its aims?” she asked, rhetorically, in an interview with DW.

Hedayat is an Iranian activist for women's and for human rights. "The economic situation in Iran has worsened," she said. "A lot of newly created jobs have been lost. Now the system is again looking for ways to bypass the sanctions, and in doing so it leaves the door wide open for corruption. Ultimately, it's the ordinary people in Iran who have to suffer the consequences."

When the nuclear deal was signed in 2015, Bahareh Hedayat was in prison. She was freed in early September 2016 after spending more than six years in custody, in part for having campaigned for equality between men and women. Hedayat, from Tehran, is one of the few human rights activists in Iran who will still speak to foreign media outlets despite the increased threat of persecution.

"Of course there's a lot of discontent in Iran. And when pressure is exerted from abroad, domestic tensions increase," she observes. "In these circumstances, dialog becomes difficult. Everyone sticks to their own position. The proponents of the prevailing system in Iran seek radical ways to defend it. What's sacrificed are rationality, tolerance and national consensus."

Pressure from abroad plays into the hands of the regime

2018 saw a wave of arrests in Iran. It was a year ago that the regime had been shocked by spontaneous protests all over the country. By the time they had ended, more than 20 people were dead; as many as 5,000 people are said to have been arrested afterwards. They include students, women's rights activists, people from religious minorities, environmental activists, and the lawyers representing them. Prominent lawyers and human rights activists, including the lawyer Nasrin Sotoudeh, were locked up on charges of harming national security.

Read more: Iran's Rouhani calls for Muslims to stand against US

This is a well-known pattern, explains Ali Vaez, an expert on Iran with the International Crisis Group. "The threat from abroad is used as justification for restricting the amount of latitude given to civil society. The security forces benefit from the sanctions, because the Iranian system increasingly relies on them to survive, and to suppress criticism at home," says Vaez.

Disappointed hopes of openness and change

Young Iranians, who associated the nuclear deal with an opening up toward the west, are disappointed. People like Omid, a self-employed tourist guide who shows Western tourists around important Persian cultural centers, like Yazd, and the smaller towns and villages of the region. The increase in tourism after the signing of the nuclear deal created jobs in the little villages and enabled people living there to come into contact with the outside world, Omid says. This year he had far fewer travelers than in 2017. He puts this down to the political tensions in Iran and the media reports about them.

Iran expert Vaez says it's tragic that the US is weakening the moderate forces in Iranian society and its middle class — especially at a time when, 40 years after the revolution, the current Supreme Leader Ayatollah Khamenei is ailing and the regime may soon be choosing his successor. Vaez comments that the effect of Washington's actions will be to extend the hostility between the two countries into the next generation.

The US serves as a cornerstone of global trade and sometimes uses this position to punish rival nations. DW looks into key restrictions that Washington curently imposes on Iran, Cuba, Russia, North Korea, and Syria. (09.08.2018)

Macron on Iran policy: "Our task is not to fuel tensions"