Iran′s Nasrin Sotoudeh — from human rights lawyer to hunger striker | Asia| An in-depth look at news from across the continent | DW | 28.08.2018

Prominent Iranian human rights lawyer and activist Nasrin Sotoudeh has begun a hunger strike in prison, accusing the authorities of harassing her family and friends in recent days. 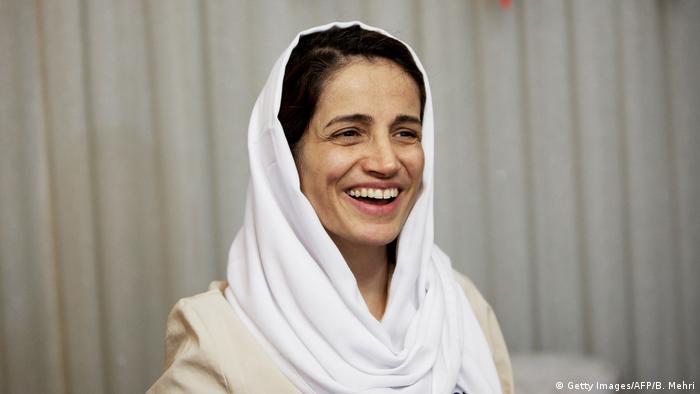 "I see no other option but to start a hunger strike from August 23. It is the only way I can express my protest against the continued pressure on my family and friends," wrote jailed Iranian human rights lawyer Nasrin Sotoudeh in a note posted on her husband's Facebook page.

Sotoudeh is one of the best-known human rights lawyers in Iran. She served about half of a six-year jail sentence imposed in 2010 for "spreading propaganda and conspiring to harm state security" — charges she denied — before being freed in 2013.

The 55-year-old lawyer was again arrested on June 13 and has been languishing in Tehran's Evin Prison since then.

The authorities have yet to present any evidence to support their claims that the lawyer has endangered Iran's national security.

"Not only our apartment — but also my sister's home — were illegally raided. The authorities have found a few badges with slogans like, 'I am against the forced veil.' They are trying to use these badges as evidence to substantiate their accusations," Sotoudeh's husband Reza Khandan told DW. "Pointing to these badges, they have also arrested a friend of my wife, the human rights activist Farhad Meisami. He is also now on hunger strike," Khandan added.

Shortly before speaking to DW, Khandan had phoned his wife in prison. "Today she was examined by the prison doctor and she briefly met her friend Farhad Meisami," the husband said. "She told me that as long as Farhad is not released, she will continue her hunger strike."

Sotoudeh was arrested in June and told she had already been found guilty "in absentia" on spying charges by Tehran's Revolutionary Court.

"At the beginning, they said it's about espionage," says Khandan. "My wife was convicted for allegedly supporting espionage in Iran through contact with foreign diplomats. It's just ridiculous. How did she know that the diplomats were spies? What was the Iranian secret service doing when those foreign spies traveled to Iran?" Khandan questioned.

The espionage allegation against the human rights lawyer was initially leveled in 2014, shortly after she met with a delegation of European parliamentarians in Tehran and discussed the human rights situation as well as the state of opposition in the Islamic Republic.

In December 2013, this delegation had presented her with the Sakharov Prize, which the European Parliament awarded her the year before in recognition of her civic engagement.

In support of opposition and activists

In 2006, Sotoudeh, together with the Iranian Nobel laureate Shirin Ebadi, founded the Center for the Protection of Human Rights in Iran. In 2010, she was arrested for defending protesters of the opposition "Green Movement" and subsequently sentenced to years behind bars. Her arrest drew worldwide condemnation and criticism. After spending three years in prison, she was released in 2013, but remains banned from representing political cases or leaving Iran until 2022.

Following her arrest again in July 2018, Sotoudeh wrote in a letter from prison: "I realized that they had arrested me for my work on human rights, the defense of women's rights activists and the fight against the death penalty. Still, I will not be silenced."

In an open letter to Iranian President Hassan Rouhani, 68 members of European Parliament (MEPs) protested last week against the repeated arbitrary action against Sotoudeh. The Iranian government has so far not responded to the letter.

Barbara Lochbihler, a Green EU lawmaker and co-signatory, told DW that the EU support for Iran, including financial aid, is justifiable, particularly in view of the renewed US sanctions against the country. But at the same time, she underlined, this shouldn't mean the EU will have to withdraw its commitment to ensuring human rights in Iran.

Lochbihler said in case she travels to Iran, she will try to arrange a visit to the prison and meet Sotoudeh. This would be "an important step, especially since there is no EU delegation in Tehran that can work for the cause of human rights activists on the ground," the MEP pointed out.

The European politician said she wants the EU to take a clearer stand with regard to promoting human rights. "There hasn't been an unequivocal statement from the EU calling for Sotoudeh's immediate release from prison," she said.

The Iranian president has been summoned before parliament for the first time since he assumed office in 2013. Under pressure from allies and rivals alike, Hassan Rouhani has pledged to defeat reimposed US sanctions. (28.08.2018)

Iran's parliament has removed Economy Minister Masoud Karbasian in the latest blow to a government struggling with a deepening economic crisis. The move follows new US sanctions and a sharp fall in the value of the rial. (26.08.2018)