Tehran has expressed hope that the Iran nuclear deal can be saved despite the US pulling out of the agreement. Iran's statement came during a visit of the British foreign minister to Iran. 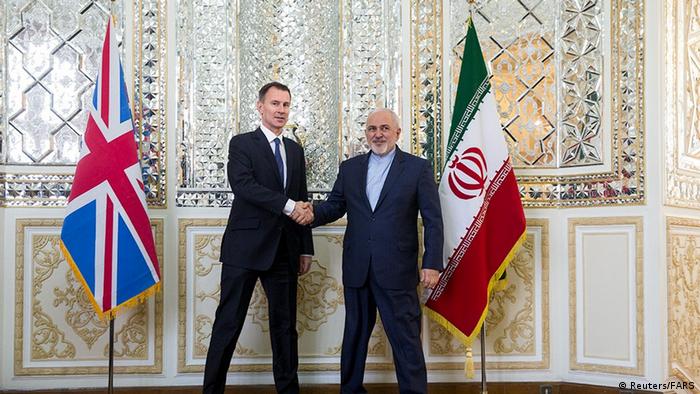 The Iranian foreign ministry said on Monday that the Iran nuclear deal can be saved, despite the withdrawal of the United States.

"We remain hopeful that the Europeans can save the deal," ministry spokesman Bahram Qasemi told a news conference broadcast live on state TV.

The comments came ahead of British Foreign Secretary Jeremy Hunt's meeting with his Iranian counterpart, Mohammad Javad Zarif, in Tehran. Hunt said the United Kingdom remained committed to plan before leaving for Iran.

"The Iran nuclear deal remains a vital component of stability in the Middle East by eliminating the threat of a nuclearized Iran," Hunt said. "It needs 100 percent compliance though to survive."

Hunt is the first European foreign minister to visit the country since the US pulled out of the Iran nuclear deal, also known as the Joint Comprehensive Plan of Action (JCPOA).

Europe against the US

The JCPOA — a deal between Iran and the United States, Germany, Britain, China, Russia and France, as well as the European Union —  was concluded in 2015 after years of painstaking negotiation. It lifted international sanctions against Iran in exchange for the country dismantling its nuclear program.

The deal's European signatories consider it the best option to avoid nuclear proliferation and to prevent Iran getting a nuclear weapon.

But they have been scrambling to save it since US President Donald Trump followed through on a campaign promise to withdraw the US from the JCPOA in May. He had described the pact as "the worst deal ever."

Hunt is also expected to discuss Iran's role in the conflicts in Syria and Yemen and call for the immediate release of detained British-Iranian dual nationals on humanitarian grounds during his visit.

"I arrive in Iran with a clear message for the country's leaders: putting innocent people in prison cannot and must not be used as a tool of diplomatic leverage," he said.

Nazanin Zaghari-Ratcliffe, a dual national, is serving a five-year prison term for allegedly planning the "soft toppling" of the Iranian government.