Nazanin Zaghari-Ratcliffe, who has both British and Iranian citizenship, was charged with trying to overthrow the government. Her daughter has also not been allowed to leave the country. 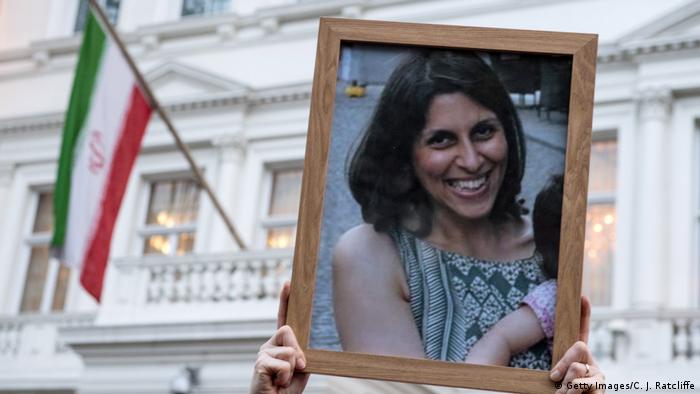 Iran has confirmed it has been keeping a British-Iranian woman under arrest for seeking to overthrow the government. If tried, the 37-year-old could face the death penalty. (19.06.2016)

Three US citizens who were jailed in Iran - some for years - have been released and arrived at a US base in Germany. One of the prisoners released under the deal did not board the Swiss aircraft bound for Germany. (17.01.2016)

British-Iranian woman out on bail after volleyball arrest

The family of a British-Iranian woman jailed after watching a men's volleyball match in Tehran says she has been released on bail. Ghoncheh Ghavami had been in prison since her arrest in June. (23.11.2014)

A British-Iranian charity worker was sentenced to five years in prison for trying to overthrow the government in Tehran, authorities announced Sunday. Nazanin Zaghari-Ratcliffe has already been in detention for ten months since her April 2016 arrest on charges of espionage and sedition.

She was arrested when trying to leave the country with her young daughter after a visit to her family. Her passport was seized and the toddler has been forced to remain in Iran, where she is cared for by her grandparents.

The 37-year-old was employed by the Thomson Reuters Foundation, the charitable arm of the British news agency. Although Zaghari-Ratcliffe has UK citizenship, Iran does not recognize dual nationality and so she cannot appeal to the British consulate for help.

In Iran, trials against suspects with two passports are often conducted behind closed doors in front of a special court that handles cases related to spying.

Although many of the details of the charges against Zaghari-Ratcliffe have not been made public, her husband Richard Ratcliffe has said that among other things, his wife is accused of working for BBC Farsi, which he says is patently false. BBC Persian Television has been the subject of repeated government criticism for "encouraging" illegal protests and inciting the public, something the broadcaster categorically denies.

"Nazanin has never worked for BBC Farsi. She served in a junior capacity as a Training Assistant for BBC Media Action, the charitable arm of the BBC, from 2009 to 2010," said Monique Villa, the CEO of Thomson Reuters Foundation.

British Prime Minister Theresa May personally voiced her concerns about Zaghari-Ratcliffe in a television call with Iranian President Hassan Rouhani last August, but to no avail. According to a judiciary spokesman, her sentence has been "finalized," likely meaning that she has lost her last chance at appeal.