Iranian protesters have burned effigies of Donald Trump and trampled Israeli flags as part of annual rallies marking Quds Day. The marches come as the US prepares to unveil a long-awaited plan for the Middle East. 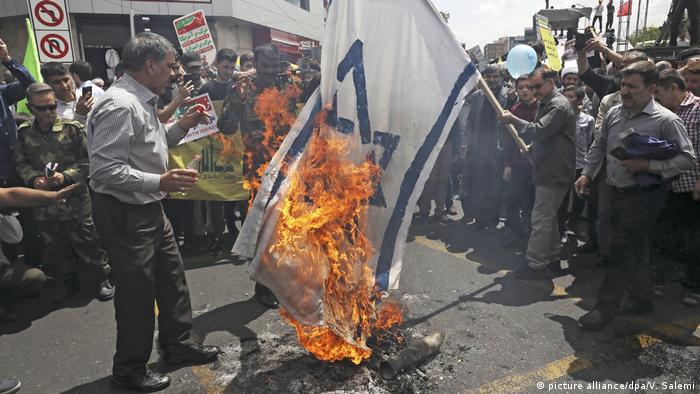 Thousands of Iranians joined marches on Friday to show solidarity with Palestinians and denounce a peace plan for the Middle East put together by US President Donald Trump's administration.

Protesters at the Quds, or Jerusalem Day, demonstrations in Tehran burnt US and Israeli flags and set fire to effigies of Trump and Israeli Prime Minister Benjamin Netanyahu.

Similar rallies took place in more than 900 communities across the country, as well as in Baghdad, the capital of neighboring Iraq, and the Syrian capital, Damascus.

Iran has held anti-Israel marches on Quds Day — the last Friday of the fasting month Ramadan — since its 1979 Islamic Revolution led by Ayatollah Ruhollah Khomeini.

Iranians deride 'deal of the century'

This year's commemorations come as the US seeks to promote its much-anticipated strategy to end the decadeslong conflict between Israelis and Palestinians.

Trump has tasked his son-in-law and senior adviser Jared Kushner with developing the plan and has dubbed it the "deal of the century."

The first phase of the peace plan is expected to be unveiled after Ramadan ends in June. But it's already been rejected by Palestinian leaders, who were infuriated by previous Trump policies such as cutting aid to Palestinians and recognizing Jerusalem as the capital of Israel.

Television footage of Friday's Quds marches showed demonstrators holding banners that read "No to the deal of the century," "Jerusalem is the eternal capital of Palestine" and "Death to America." 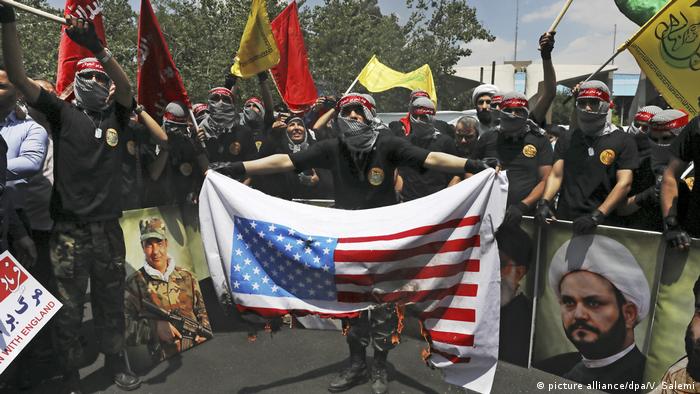 "Undoubtedly, the deal of the century will become the bankruptcy of the century and will not lead anywhere," Rouhani said, according to the state news agency IRNA.

In comments carried in a Telegram channel affiliated with state TV, Zarif said: "It is unfortunate that some Arab leaders have this illusion that if they stand beside Netanyahu, they can reach their goals."

Plan to be revealed at summit

Iran is fiercely opposed to Israel, which it does not recognize and blames for many of the problems in the Middle East. Israel and its allies, on the other hand, accuse Iran of sponsoring terrorism and fueling tensions in the region — charges Tehran denies.

Kushner was in Jerusalem on Friday as part of a Middle East tour to promote his proposal for the region.

The US is expected to unveil the economic details of the plan at a conference in Bahrain at the end of June. Trump's aim is to encourage Arab donor states to invest in the Palestinian territories, before later tackling the more contentious political issues, including the borders of a Palestinian state, the status of Jerusalem, and the fate of Palestinian refugees.

Saudi Arabia and the UAE are expected to participate in the June summit, but Palestinian leaders have said they will not attend.

Former senior European politicians have urged the EU to reject Donald Trump's peace plan for the Middle East if it's one-sided and unfair to Palestinians. The US president is about to unveil his proposal for the region. (15.04.2019)

Both Israelis and Palestinians claim the holy city as a capital. Former German Ambassador to Israel Rudolf Dressler told DW that the United States would seriously harm the Middle East peace process with an embassy move. (06.12.2017)

The US will move its Israeli embassy from Tel Aviv to Jerusalem in mid-May, coinciding with the 70th anniversary of Israel's founding. A top Palestinian negotiator has described the timing as a "blatant provocation." (24.02.2018)