US President Trump's son-in-law Jared Kushner has criticized Mahmoud Abbas for refusing to meet with him. Kushner said the peace plan would go on, with or without the Palestinian leader. 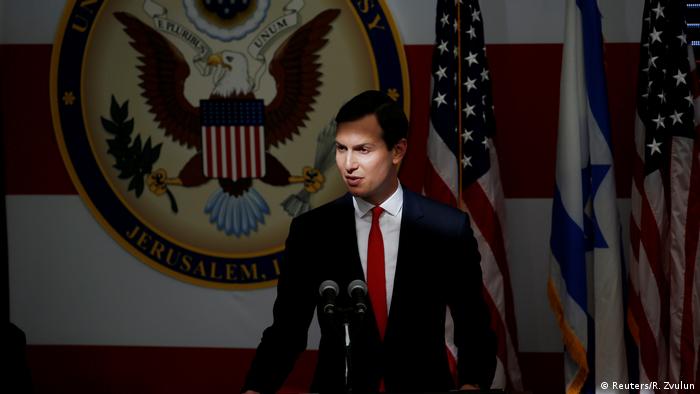 President Donald Trump's son-in-law and senior envoy to the Middle East, Jared Kushner, has slammed Palestinian President Mahmoud Abbas for refusing to meet with him during his visit to meet regional leaders.

Kushner said the White House would soon unveil its own peace plan regardless of whether the 82-year-old Palestinian leader Abbas engages in the ongoing talks.

Kushner's comments were published in the Sunday edition of the Arabic-language Al-Quds newspaper. Kushner has spent the week discussing the plan with leaders from Israel, Saudi Arabia, Egypt, Jordan and Qatar.

Kushner did call on Abbas to join the talks: "If President Abbas is willing to come back to the table, we are ready to engage; if he is not, we will likely air the plan publicly."

"However, I do question how much President Abbas has the ability to, or is willing to, lean into finishing a deal. He has his talking points which have not changed in the last 25 years," Kushner added.

Abbas has refused to meet with US officials following Trump's decision last year to officially recognize Jerusalem as the Israeli capital and relocate the US Embassy there. The US relocated its embassy to Jerusalem and opened it in May.

Palestinian leaders say the move confirms their long-held suspicions that the US is not an honest broker in the on-again, off-again peace talks, but is allied with Israel.

East Jerusalem was part of the Arab-controlled West Bank until it was seized by Israel during the Six Day War in 1967. The status of East Jerusalem, which Palestinians want as the capital of a sovereign Palestinian state, has been at the center of the decades-long struggle for peace between Israelis and Palestinians.

Senior Palestinian negotiator Saeb Erekat criticized Kushner's effort on Saturday and accused him of trying to topple the Abbas-led government, which presides over the West Bank.

Erekat also slammed the Trump administration for trying to dismantle the UN aid agency for Palestinian refugees. The negotiator doubled down on his criticism Sunday during an interview on Israeli television, saying the Washington negotiators were "not neutral" and predicting the US plan would fail.

Kushner insisted that the peace plan was "almost done," but he offered few details except the vague promise of economic prosperity for the Palestinians.

Trump's adviser also acknowledged that Arab leaders support a two-state solution, with a Palestinian state existing side-by-side with Israel, but he gave no indication that this was part of Washington's plan.

In addition to East Jerusalem, the Palestinians seek full sovereignty over the West Bank and Gaza.

How the Trump administration would move forward with a peace plan without Palestinian cooperation remains unclear.