On Monday, the US officially opens its embassy in Jerusalem. The move has sparked strong international condemnation and comes as tensions grow between Israel and Iran. Tania Krämer reports from Jerusalem. 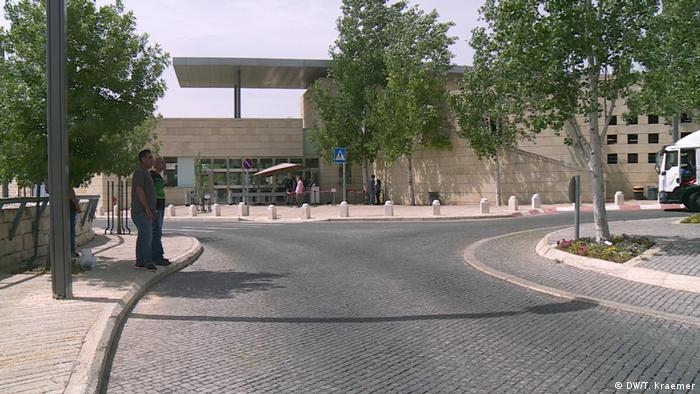 On May 14, the quiet residential neighborhood of Arnona in the south of Jerusalem will become the center of world attention. US and Israeli flags already adorn the street leading up to the US Consulate there. Now, the same building will become the new site of the US Embassy in Jerusalem. Street signs in Hebrew, Arabic and English have gone up.

Last December, US President Donald Trump announced the embassy's move from Tel Aviv to Jerusalem, delivering on his election campaign promise. The decision broke with long-standing US foreign policy and has been widely criticized. The international consensus remains that the status of Jerusalem should be part of final status negotiations between Israel and the Palestinians.

"I think it's okay that the US moves the embassy over here, because this is after all the capital. Ask every kid what's our capital: It's Jerusalem," says Uriel Berenstein as he walks his dog in downtown (West) Jerusalem. "Should there be someday a Palestinian state, if they want part of Jerusalem, someday they'll find an agreement, but for now, Jerusalem is the capital of Israel," he adds. 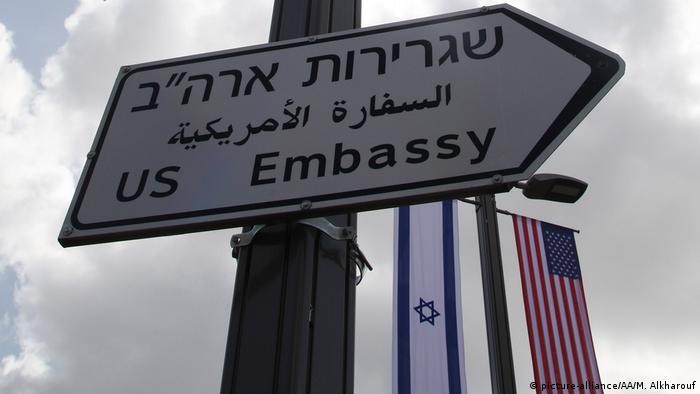 The 25-year-old Israeli is worried that the controversial decision will trigger new tensions between Palestinians and Israelis. "It will certainly cause tensions, but we can only hope that leaders on both sides know how to calm down people."

Only US Ambassador David Friedman and a few staff members will work out of the new embassy site in Jerusalem during the first phase. The complete relocation will take years, according to a US official. The embassy will be either gradually expanded on the current premises or a new complex might be built. The site is situated near the so-called Green Line, the demarcation line which separated Israeli and Jordanian territory after the 1948 war.

"Paradoxically, the move of the embassy has no direct impact on the city. But on the other hand, it has enormous consequences," says Daniel Seidemann, an American-Israeli attorney and founder of the NGO Terrestrial Jerusalem. "Jerusalem today is more divided, less sustainable, more contested than ever before. Moving the embassy here is not changing that. Having said that, there are huge ramifications as it delivers the death certificate to American stewardship over political processes in Israel-Palestine relations."

While the Trump administration is believed to be working on a new peace plan, it has given mixed signals on its plans for Jerusalem. The city remains under dispute between Israel and the Palestinians. On his first trip to Israel in April, newly appointed US Secretary of State Michael Pompeo reiterated that the "boundaries of Israeli sovereignty in Jerusalem remain subject to negotiations between the two parties." 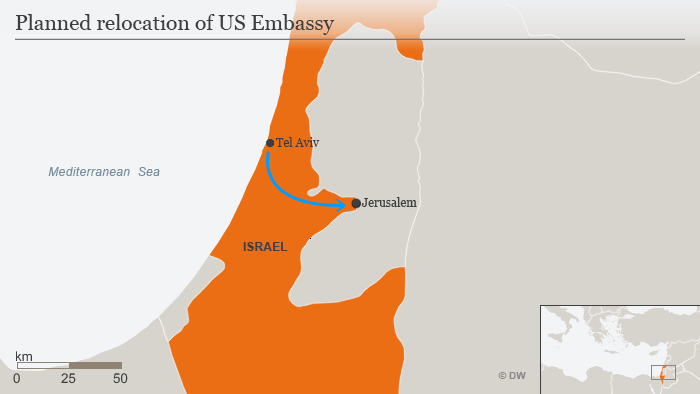 However, in January, US President Donald Trump stated that "we took Jerusalem off the table. So, we don't talk about it anymore." The Palestinian Authority has strongly denounced the Trump administration's decision on Jerusalem and has refused to engage with US officials ever since. Palestinians have called on other diplomatic missions to boycott the US Embassy's inauguration event on Monday, which will be attended by around 1,000 guests, among them Treasury Secretary Steven Mnuchin. Trump's daughter Ivanka will also attend.

In east Jerusalem, Palestinians will follow the events closely.

"It shows that the Americans are completely with the Israeli side, they do not care about Palestinian rights. They are basically telling Palestinians we are against your dreams of having a state, and the Palestinians are left with nothing," says Jawad Siyam, a Palestinian activist who took part in peaceful demonstrations in Jerusalem in December, after the US announcement. "They are repeating history. They tell the Palestinians, 'You have no rights here, and other nations can take over,'" he adds.

Palestinians want their own state with their capital in east Jerusalem, which Israel captured from Jordan during the war in 1967. In 1980, Israel effectively annexed east Jerusalem and declared the entire city as its capital. This move was never recognized by most of the international community. "Who is Trump to come and say Jerusalem is Israel? What does he have to do with Jerusalem?" says another young man, on his way to Damascus Gate, one of the main entrances to the Old City. The US decision is perceived as ignoring the Palestinians' presence and historical ties to the ancient city, which is holy to Muslims, Jews and Christians. 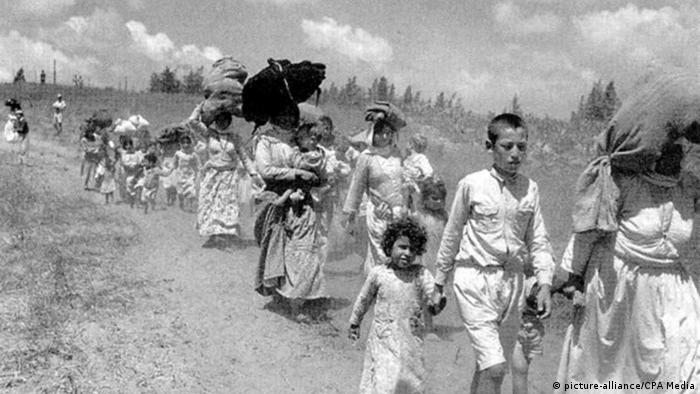 The exodus of Palestinians in 1948, marked as Nakba Day, has left an indelible stamp on relations between Israel and Palestinians

The opening coincides with renewed tension between Israel and Iran that could turn into a full-blown conflict. Attention will also turn to the Gaza Strip's border with Israel, where Palestinian organizers of the so-called Great March of Return plan to hold a peaceful protest on the day of the embassy's inauguration. Since the end of March, weekly protests have taken place there every Friday. Over the past weeks more than 45 Palestinians have been killed and hundreds more wounded, mainly by Israeli sniper fire.

A day after the embassy opening, Palestinians mourn the loss of their land, which they refer to as Nakba ("catastrophe") — another stark reminder to many Palestinians that their dream of statehood is fading away. "Moving the embassy has far-reaching ramifications for the Palestinians as well," says Daniel Seidemann. "It sends a clear message to them: Abandon all hope. This conflict is not moving towards a resolution."