After Israel bombed Iranian targets in Syria, Israeli Prime Minister Netanyahu called the move an "appropriate" response to an alleged rocket attack by Iran's forces. The UN has urged an end to "all hostile acts." 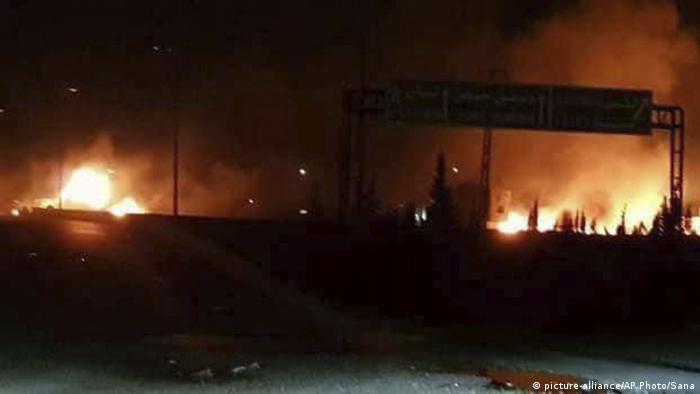 "We are in the midst of a protracted battle and our policy is clear: We will not allow Iran to entrench itself militarily in Syria," he said in a brief video address.

The Israeli leader also warned that "whoever attacks us - we will attack them sevenfold and whoever prepares to attack us - we will act against them first."

Previously, the Israeli military accused Iranian troops of firing 20 rockets against the targets in Golan Heights, a border area once controlled by Syria, but occupied by Israel for over 50 years.

Some of the rockets were intercepted by Israel's Iron Dome aerial defense system. Nobody was killed or injured in the attacks and no rockets struck Israeli territory, the army said.

However, the Israeli army did not say how they were able to determine that Iran's troops were behind the attack. Iran itself has denied shelling Israeli positions, with Foreign Ministry spokesman Bahram Ghassemi accusing Israel of making baseless accusations to justify its own hostile acts.

The subsequent Israeli air strikes killed 23 pro-government fighters in Syria, according to the UK-based Syrian Observatory for Human Rights. Israeli military tweeted a video of a what they said was a missile hitting a mobile aerial defense battery in Syria.

In his video address on Thursday, Netanyahu repeated the claim that Tehran was responsible and the Israeli raid was "appropriate."

"Iran has crossed a red line," he said. "Our reaction was a consequence."

He also said that Israeli's move should send a message to Syrian President Bashar al-Assad not to attack Israel.

Allies of both countries fear that the latest skirmish might prompt a larger conflict between Israel and Tehran. Following the incident, Russia, France, UK, and Germany all called to deescalate the tensions, while the US said Iran was at fault and emphasized Israel's right to "self-defense."

In a tweet, UN Secretary-General Antonio Guterres called for "an immediate halt to all hostile acts and any provocative actions."

Observers believe Israel has repeatedly targeted Syrian regime fighters, Iranian forces, and fighters of the Lebanese Hezbollah militia in the past. While the Israeli government rarely confirms its involvement on Syrian soil, Israel was blamed for missile strikes and bombings which killed at least 40 Syrian and Iranian soldiers last month, as well as for firing missiles that killed nine people near Damascus earlier this week.

Israel says it has proof of secret Iran nuclear program