Palestinian leader Mahmud Abbas is hoping for a greater EU role in Middle East peace efforts amid a row with the US. But it seems unlikely he will secure concrete commitments when he meets EU foreign ministers Monday. 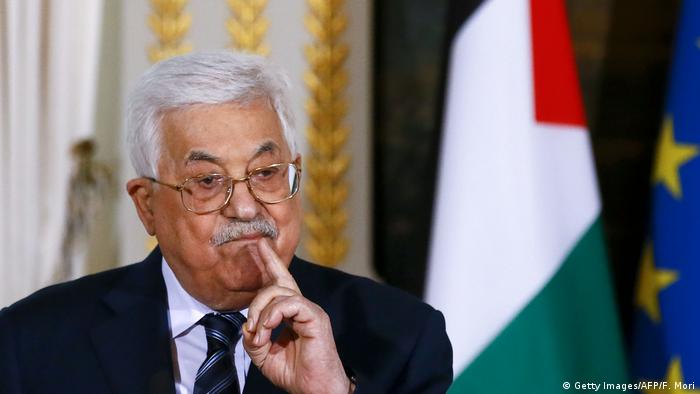 Palestinian leader Mahmud Abbas arrived in Brussels on Monday for diplomatic talks with EU officials, hoping to prompt a strong response by the bloc on US President Donald Trump's decision to recognize Jerusalem as the Israeli capital.

Abbas was expected to urge EU diplomatic chief Federica Mogherini and the bloc's 28 foreign ministers to play a more active role in the Middle East peace process, after declaring that he would no longer accept the Trump administration as meditator in future negotiations with Israel. In a fiery speech earlier this month, Abbas said that recent US peace efforts for the Middle East and the Jerusalem decision amounted to the "slap of the century."

Speaking ahead of his meeting with Mogherini, Abbas called on the EU to recognize Palestinian statehood, saying it would not interfere with the peace process.

"We truly consider the European Union as a true partner and friend - and therefore we call on its member states to swiftly recognize the state of Palestine," Abbas said

Mogherini, for her part, said the EU remains committed to the two-state solution and views Jerusalem as a joint capital.

In an interview with the news agency AFP, Palestinian Foreign Minister Riad al-Malki said that "since Trump's decision has altered the rules of the game, he [Abbas] expects European foreign ministers to come forward and collectively recognize the state of Palestine as a way to respond to Trump's decision."

However, it remains unlikely that Abbas will receive much in the way of concrete proposals. While France is reportedly keen to grant the Palestinian leader an association agreement with Brussels, other states remain cautious over a deal with a country yet to achieve sovereignty.

Although the Palestinian Authority is "very serious" about such an agreement, it also eventually expects state recognition: "One does not replace the other. Absolutely not," Maliki said.

Last week, Luxembourg's Foreign Minister Jean Asselborn said his and several other countries — including Ireland, Portugal and Poland — would back such a move.

While this appears unlikely to happen in the near future, the European Council tweeted on Sunday that its position on the Middle Peace process had remained the same, in spite of Trump's Jerusalem decision: A two-state solution with Jerusalem serving as the capital to both Israel and a future Palestinian state.

Mogherini hosted Israeli Prime Minister Benjamin Netanyahu last month on the sidelines of the bloc's monthly diplomatic briefing. She stressed that Brussels would continue working with the US and actors in the region to forge a framework agreement, but added that the EU was fully united in refusing to follow Trump's move on Jerusalem.

Abbas' trip to Brussels comes at a sensitive time, coinciding with US Vice President Mike Pence visit to Israel, the first such trip by a senior Washington official to the region since Trump's Jerusalem announcement provoked violent Palestinian protests and sparked international outcry.

Pence on Monday addressed the Israeli parliament, becoming the first senior White House official to do so since President George W. Bush in 2008.