Four Palestinians have been shot dead by Israeli forces and at least 150 more wounded in clashes across the West Bank and Gaza. Protests over the US recognition of Jerusalem as Israel's capital show no sign of relenting. 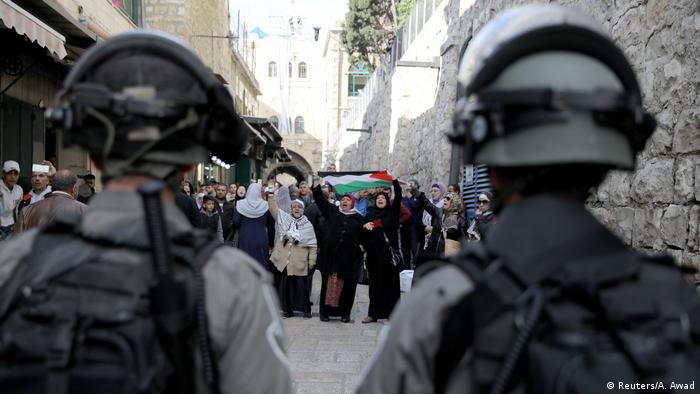 Thousands of Palestinians protested across the West Bank and Gaza on Friday against Washington's decision to recognize Jerusalem as Israel's capital.

Two of the deaths were in the West Bank and two along the border of Gaza. One of the killed was Ibrahim Abu Thurayeh, a disabled man in a wheelchair whose legs had been amputated.

Since US President Donald Trump's December 6 announcement, six Palestinians have been killed in clashes, while two Hamas militants in Gaza were killed by Israeli air strikes.

The Israeli military said thousands of Palestinian "rioters" burned tires and hurled firebombs and rocks at soldiers in the West Bank and along the border with Gaza. In response troops used tear gas, rubber bullets and "fired selectively toward main instigators."

A police officer near a military check point outside Ramallah was stabbed and wounded by an assailant, police said.  The attacker was shot and later died.

Spokesman Micky Rosenfeld said police are investigating whether the attacker was wearing a suicide bomb vest or a fake explosive device.

Since Trump's announcement, at least 12 rockets or mortar rounds have been fired from Gaza, so far without casualties.  Israel has targeted at least 10 sites in Gaza in response.

Trump's decision to recognize Jerusalem as the capital of Israel, and to order the US embassy to move from Tel Aviv to the holy city,  upended decades of US policy and drew international condemnation from allies and foes alike.

The Palestinians, who claim East Jerusalem as the capital of a future state, have said that the decision removes the United States as a mediator in long stalled peace talks.

The militant group Hamas has called for a third intifada, or uprising.

According to a poll conducted after Trump's announcement by the Palestinian Center for Policy and Survey Research, 45 percent of Palestinians support a violent popular uprising. That compares to 35 percent from three months ago.

However, the scale of protests has been relatively muted, and the United States' move has boosted right-wingers in the Israeli government calling for further annexations in the West Bank.

If protests do not escalate, "right-wing (Israeli) leaders will continue to raise doubts about other worst-case scenarios presented by their political foes," wrote Ofer Zalzberg, the senior analyst for Israel and Palestine at the International Crisis Group. "Some are now daring to ask if Israel could annex some or all of what it calls Judea and Samaria (West Bank) without a third intifada, or if it could get away with erecting a synagogue on the Temple Mount (al-Haram al-Sharif). Israeli assessments of the consequences of Trump's proclamation likely will have a significant impact on potential Israeli annexationist moves."

Ismail Haniyeh, leader of Hamas, has called for a new Palestinian intifada, or uprising, after US President Donald Trump's announcement on Wednesday. Violent protests have erupted in the West Bank. (07.12.2017)