Moving the US embassy to Jerusalem could spark a "third intifada," Hamas leaders say. But what exactly is an intifada, and what did the first two mean for the conflict between Israelis and Palestinians? DW has the facts. 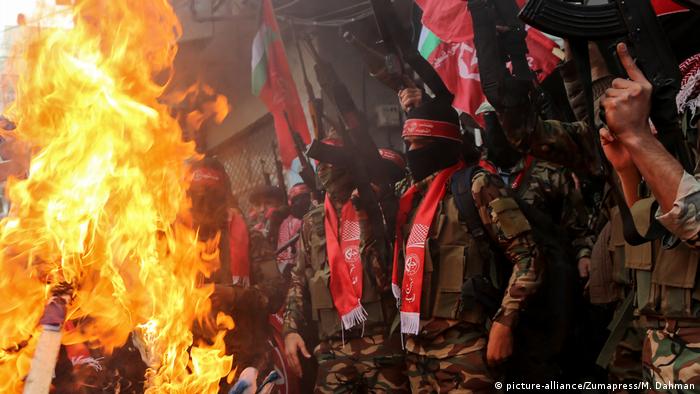 What is an intifada?

In English, the word intifada is often translated as a "rebellion" or "uprising," but the original meaning in Arabic is closer to "shaking off" or "getting rid of" someone or something. When intifada is used in the context of the decades of fighting between the Palestinians and Israelis, it means an organized, both grassroots- and politically-backed uprising of local Palestinians against the Israeli military. The opposing sides already fought two such conflicts. The first one started in 1987 and ended in 1993, and the second one, far bloodier, broke out in 2000 and lasted for over four years.

Angered over Donald Trump's decision to move the US embassy to from Tel Aviv to Jerusalem, the militant Palestinian group Hamas is now calling for a third intifada.

Israel claims Jerusalem as its capital. However, Palestinian officials also claim that East Jerusalem, currently occupied by Israel, should become the capital of a future Palestinian state. Moving the US embassy to Israel in Jerusalem is seen as the US openly taking Israel's side.

US President Donald Trump to move embassy to Jerusalem

Hamas is a militant, Islamist Palestinian faction that incorporates both a political and a military wing. It is also the second-largest political force in the occupied Palestinian territories, behind the less hawkish Fatah. The two groups are working on bridging their divide to form a unity government.

Hamas denies Israel's right to exist and has called for the destruction of the Jewish state. It has fought several wars against Israel in recent years, including the bloody conflict in the Gaza Strip in the summer of 2014. The faction also committed a range of terror strikes and suicide bombings against Israeli targets.

Hamas was founded in 1987, in the opening year of the first intifada.

What was the first intifada?

The beginning: The first intifada started on December 8, 1987 when an Israeli military truck crashed into a civilian car transporting Palestinian workers who were waiting to return to the Gaza Strip. Four Palestinians were killed in the collision. While the Israelis maintained that the driver lost control of his vehicle, many Arab observers believe that the truck intentionally rammed the vehicle, seeking revenge for a deadly stabbing that claimed the life of an Israeli some days earlier. The preceding months were characterized by simmering violence on both sides. 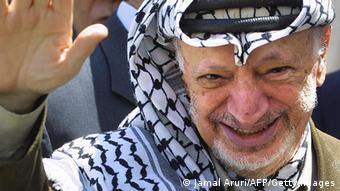 Yasser Arafat led the PLO until his death in 2004

The escalation: The deaths of the Palestinian workers prompted violent riots against Israeli soldiers, who repeatedly used live rounds against the crowds. The violence escalated in the following days, with protesters raising barricades and pelting Israeli vehicles with stones. While the unrest was initially spontaneous, the Palestine Liberation Organization (PLO) led by the late Yasser Arafat soon started directing the events.

At the same time, many Palestinians also refused to go to work in Israel, pay taxes or buy Israeli products, among other acts of civil disobedience. The opening of the first intifada also saw the birth of Hamas, which was founded by Sheikh Ahmed Yassin with the aid of the Muslim Brotherhood and religious members of the PLO.

The ending and death toll: After years of violence, the first intifada ended with the signing of the Oslo Accords between the Israeli government and the PLO in 1993. The document created the Palestinian Authority and enabled a measure of self-governance in the occupied regions, but it was rejected by Hamas.

While estimates of the death tolls differ among various sources, Israeli NGO B'Tselem claims that 1,203 Palestinians were killed by the end of 1993, compared to 179 Israelis. Israel's brutal crackdown also seriously damaged its international reputation.

What was the second intifada?

The beginning: On September 28, 2000, Israeli politician Ariel Sharon visited the Israeli-occupied areas of East Jerusalem, triggering the second intifada. Palestinian leaders saw the visit as Israel laying claim to both the occupied territories and Islam's holy sites at Jerusalem's Temple Mount. While Sharon served as opposition leader in Israel's parliament at the time of the visit, he was elected prime minister several months later. The move also fed pre-existing resentment among the Palestinians, linked to the breakdown of peace talks in Camp David in July 2000.

Sharon visited the Temple Mount under massive police escort, but reportedly steered clear of the renowned Al-Aqsa Mosque, which was also at the center of the repeated outbreaks of violence in 2016 and 2017. Still, his visit sparked riots and condemnation in the Palestinian media. Protesters attacked hundreds of police officers guarding Sharon and his fellow lawmakers. The violence escalated quickly once again, and two days later a shootout in the Gaza Strip claimed the life of 12-year-old Muhammad al-Durrah in a widely publicized incident.

The escalation: Hamas declared October 6, 2000, a "day of rage" and called on Palestinians to attack Israeli army outposts, further escalating the conflict, which continued for years.

Unlike the first intifada, which saw Palestinians use mostly stones and Molotov cocktails against the Israeli forces, the second mass uprising saw Hamas and other jihadist groups fight gunbattles with Israeli soldiers and shell Israeli towns. Both sides also engaged in high-profile assassinations.

In turn, Israel launched airstrikes against targets in Gaza and large-scale military attacks in the occupied territories. The intifada also prompted Israeli officials to start constructing the large "anti-terror" barrier.

The ending and death toll: The Israeli daily Haaretz estimates that some 1,330 Israelis were killed and also notes 3,330 victims on the Palestinian side in the five years of fighting. While the second intifada has no clearly determined end date, some observers point to the death of Yasser Arafat in November 2004 as the decisive moment. However, lethal attacks continued for months after his death.