Palestinians have taken to the streets of Gaza to protest against the US recognition of Jerusalem as Israel's capital. US President Donald Trump is to publicly address the issue on Wednesday. 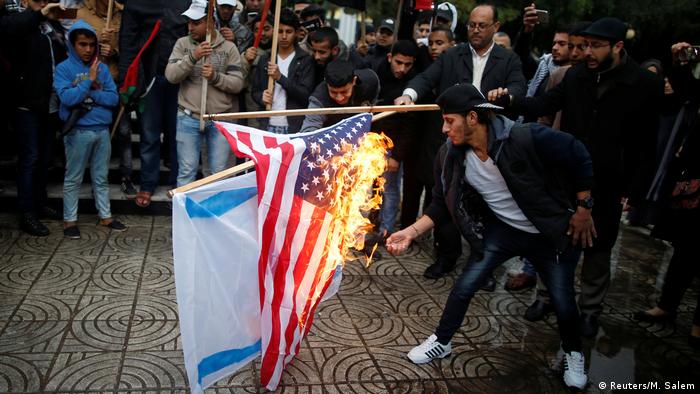 Hundreds of Palestinians in Gaza have demonstrated ahead of US President Donald Trump's expected announcement recognizing Jerusalem as Israel's capital and his plan to move the US Embassy there from Tel Aviv.

The protests were organized by various Palestinian factions and military groups, which are calling for Palestinian unity. Demonstrators waved Palestinian flags and banners declaring Jerusalem to be "our eternal capital." They also burned American and Israeli flags.

Hamas official Salah Bardawil said, "Trump or anyone thinking that our people, nation and resistance are unable to push back his plans is wrong." Hamas' senior political leader Ismail Haniyeh told Al-Jazeera TV that, "our Palestinian people will have a suitable response. As a people, we cannot accept this American pattern." 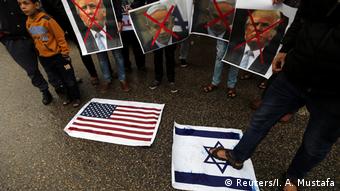 In an agitated round of calls, the leaders of Saudi Arabia, Egypt, Jordan, the European Union, France, Germany and Turkey have strongly urged Trump against taking this step.

British Prime Minister Theresa May told the House of Commons that Britain's stance is that "the status of Jerusalem should be determined in a negotiated settlement between the Israelis and the Palestinians, and Jerusalem should ultimately form a shared capital. I'm intending to speak to President Trump about this matter."

German Foreign Minister Sigmar Gabriel on Tuesday warned the US about the dangers of moving the US embassy from Tel Aviv to Jerusalem.

"Recognizing Jerusalem as the capital of Israel does not calm a conflict, rather it fuels it even more," Gabriel said. "It's in everyone's interest that this does not happen."

Read more: Arab world warns US not to recognize Jerusalem as Israeli capital

Despite widespread international opposition to the move, Trump is expected to recognize the city as Israel's capital on Wednesday. A senior administration official speaking on the condition of anonymity told AFP news agency that the president would make the announcement during a speech slated for 1 p.m. local time (1800 UTC).

But Trump will reportedly also sign a legal waiver that would delay moving the embassy by another six months.

Palestinian President Mahmoud Abbas said on Tuesday that Trump had called to inform him of plans to move the US embassy, the Palestinian Authority's official news agency reported.

Abbas "warned of the dangerous repercussions of such step on the (long-stalled) peace process, security and stability in the region and the world," said Palestinian presidential spokesman Nabil Abu Rudeineh.

The status of Jerusalem has been a key stumbling block during previous peace negotiations between Israelis and Palestinians, in particular regarding the question of how to divide sovereignty and oversee holy sites. Another major hurdle to peace is illegal Israeli settlements in the West Bank.

However, Israeli officials have urged the Trump administration to make a decision on the issue. Israeli Defense Minister Avigdor Lieberman called on the White House to take the "historic opportunity" to recognize Jerusalem as Israel's capital, saying he hopes to "see an American embassy here in Jerusalem next week or next month."

US to move embassy to Jerusalem

US President Donald Trump to move embassy to Jerusalem

The Temple Mount: A clash of cultures

Israel has removed metal detectors from the Temple Mount site in Jerusalem. The death toll in the crisis continues to grow as the conflict takes on an increasingly religious dimension that could be difficult to control. (25.07.2017)

It has been almost fifty years since the Six Day War of 1967, but the dispute between the Israelis and the Palestinians remains unresolved. Here is a short history of the attempts that have been made to find a solution. (15.01.2017)

World in Progress: Jerusalem after the Temple Mount Crisis