With his decision to recognize Jerusalem as the capital of Israel, US President Donald Trump risks a dangerous escalation. Both Palestinians and Israelis could suffer in equal measure, says DW's Rainer Sollich. 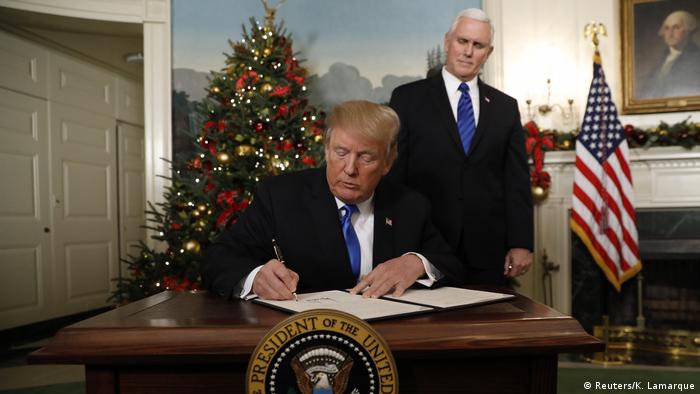 Almost the whole world had warned the US president against taking this step: Palestinians, Arab and Islamic countries, but also Germany, the United Kingdom, the European Union, Russia and the Pope. Several Israeli and Jewish voices, such as the established Israeli newspaper Haaretz and the Central Council of Jews in Germany also expressed criticism of the move. It fell on deaf ears. All of them could not stop Donald Trump.

Notwithstanding the many warnings and concerns about a new outbreak of violence in the Middle East, he kept his campaign promise and unilaterally recognized Jerusalem as Israel's capital — including moving the US Embassy from Tel Aviv to the city that is considered holy by Jews, Christians and Muslims.

Humiliation for the Palestinians

That's not only a symbolically grave step because many Arabs and Muslims – including those outside the Palestinian territories ­– may take it as a severe humiliation and a political defeat. When it comes to Jerusalem, religious and political emotions always run high. On the political level, the United States is breaking not only demonstratively and needlessly from a decades-long consensus in international Middle East diplomacy, according to which the status of Jerusalem should be clarified in the course of a final peace settlement, but the Palestinians continue to claim the eastern part of Jerusalem as a capital for their own future state. With Trump's decision, the US also de facto becomes the only country worldwide to subsequently legitimize the annexation of East Jerusalem, which has been considered a clear breach of international law.

With that, Trump creates a fait accompli and brings the weaknesses and powerlessness of the Palestinians and the Arab-Islamic world before their own eyes. Angry demonstrations, outbreaks of violence, terrorism, notes of protest, the severing of political ties or diplomatic relations: many serious reactions threaten to follow. It is the US president, with his absurd and highly dangerous decision, who bears full responsibility. The move cannot be politically justified. Trump is only, wantonly and in the most dangerous way, fueling the Middle East conflict.

Despite all the protests, it's unlikely Trump will back down. An independent Palestinian state, if it ever comes, will not only have to look for a new capital but will also have to accept further painful concessions. The alliance between the US and Israel is so strong right now that Palestinians and Arabs are powerless against it – especially as many Arab leaders are in reality pursuing very different priorities, in spite of their public shows of solidarity toward their "Palestinian brothers."

Regional heavyweight Saudi Arabia had warned the US president against unilaterally changing the status of Jerusalem. But the Saudis are currently shaking up their own internal power structures and fighting with increasing bitterness against the growing influence of their geostrategic rival Iran. For this, they depend on strong partners like Trump and, despite the lack of diplomatic relations, strive behind the scenes for cooperation with Israel, which also sees Iran as a dangerous security risk. The possibility of Saudi Arabia becoming a sort of godfather for a future Middle East peace has been talked about.

But any progress in this area is likely to be impossible for the time being due to Trump's decision — and in reality, Saudi Arabia's leadership may be just as indifferent to the fate of the Palestinians as the Iranian leadership, which likes to hide its own ambitions for political power behind pro-Palestinian rhetoric and hateful slogans against Israel.

The United States only wants to acknowledge reality and remains committed to the goal of peace in the Middle East, Trump assured as he announced his decision. That can only be called cynical. Because it's Israelis and Palestinians alike who stand to suffer the consequences.

Gunman fires on bus in Kosovo, teenagers killed 5h ago