US embassy in Jerusalem opens, further fracturing a ′fragile city′ | Middle East | News and analysis of events in the Arab world | DW | 14.05.2018

The jubilation that greeted the lavish opening ceremony of the controversial US embassy in Jerusalem was in stark contrast to the rising death toll reported from the Gaza Strip. Dana Regev collected eye-witness accounts. The streets surrounding the new embassy compound were awash with Trump supporters, Jewish marchers and Jerusalem residents celebrating ecstatically ahead of the inauguration Monday.

"It's a dream come true," Marc Zell, chairman of Republicans Overseas in Israel, told DW outside the embassy. "We've been waiting for this moment for years, decades," he added, standing amid huge throngs of people waving Israeli and American flags and thanking US President Donald Trump for moving the embassy to Jerusalem, recognizing the city as the capital of Israel.

"I think it's an important move, a necessary one," said 26-year-old Tamir, echoing Zell's words.

Originally from New York, Tamir has lived in Jerusalem for the past eight years. "There are people around the world that say that it makes the prospect for peace more distant — but that couldn't be farther from the truth … There will be no deal, ever, that does not include Jerusalem as Israel's capital."

Meanwhile, Israeli police stormed a crowd of about 200 Palestinian and Israeli left-wing activists, grabbing Palestinian flags and detaining several protesters. But all in all, critical voices were less vocal, some fearing future harassment, some even fearing for their lives.

"What is there to say? Israel has been crushing us for years and continues to do so now. Nothing changes," said Palestinian taxi driver Mohammed, who lives in the Old City.

"Israel wants to kill us all. But inshallah [god-willing] they will not succeed. We are willing to die for this land rather than flee like rats," a masked Palestinian protester told DW outside of Damascus Gate, which separates the western part of the city from its East, which Palestinians seek as their capital in any potential two-state solution.

And less than 100 kilometers (60 miles) away, Gaza experienced its deadliest day of protest since Palestinians started demonstrating along the border with Israel on March 30, calling for an end to Israel's blockade of the Gaza Strip and a return to lands Palestinians fled or were expelled from during the 1948 Arab-Israeli war.

"Palestinians who fled in 1948 live like dogs today all over the world," 30-year-old protester Firas told DW in Jerusalem. "So I might as well die here, on my land, with honor." 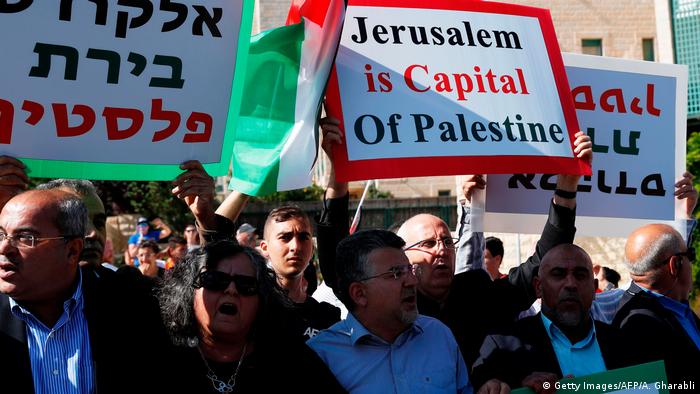 Palestinians demonstrate outside the new US embassy

But not all critics are Palestinians. Many Israelis also see Trump's move as controversial, if not harmful. Leor J. is a senior assistant in Israel's parliament, the Knesset. "This city is already so tense, so fragile. What is the point of all of this?" she asked rhetorically, adding that as a resident of the city, she felt "cheated."

"Will we no longer need a visa to fly to the US? Will Israelis be able to work there or move there? No. So what's the fuss about? Am I actually benefiting from this? You know the answer."

The days leading to the opening ceremony also saw violent clashes, as Israel marked Jerusalem Day with mass parades across Jerusalem and Palestinians were preparing for Tuesday's Nakba Day ["catastrophe"], the term they use to describe Israel's creation. 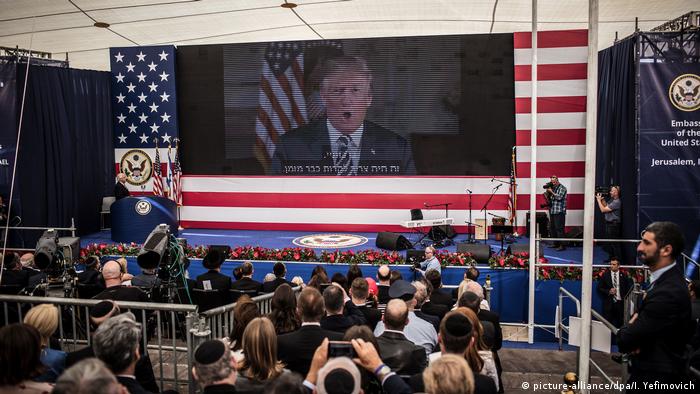 Donald Trump relayed his message via video link at the ceremony

Back at the ceremony itself, a recorded message from Trump proclaimed: "Israel is a sovereign nation with the right, like every other sovereign nation, to determine its own capital ... Yet for many years we failed to acknowledge the obvious: The plain reality that Israel's capital is Jerusalem."

Israeli President Reuven Rivlin said in response that "finally we have a leader who promised [to move the embassy to Jerusalem] and kept his promise. Even the obvious needs to be stated sometimes."

And indeed, for most Israelis having Jerusalem as their capital is a de-facto reality. Nevertheless, many say, having the United States reaffirm that is essential. "We will show the world — and the Palestinians — that this is the land of the Jews," said Adika Nahum, a resident of Arnona, where the embassy is now located. "Jerusalem is our holy and eternal capital," as Trump declared the embassy, "in the historic and sacred land of Jerusalem," open.

And even as reports of rising death tolls in Gaza continued to emerge, Trump insisted "our greatest hope is for peace."