Clashes erupt in Gaza as US Embassy in Jerusalem opens

At least 52 Palestinians have been killed and hundreds injured during clashes with Israeli forces along the Gaza border. Protests amplified as the new US Embassy opened in Jerusalem. 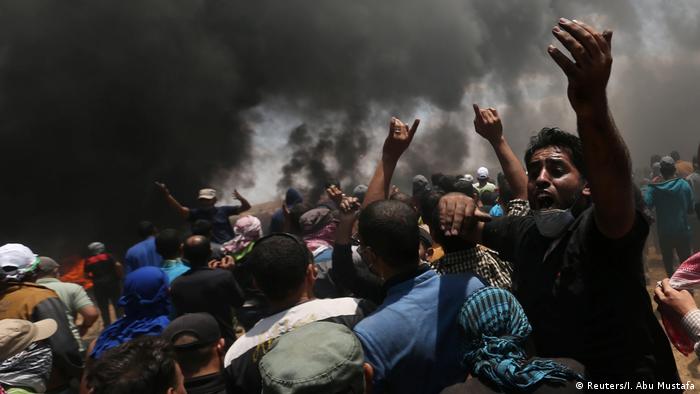 Fresh clashes between Israeli troops and Palestinians broke out on Monday on the border between the Gaza Strip and Israel, as a six-week protest against the US moving its embassy in Israel to Jerusalem reached its climax.

Gaza's health ministry said 52 Palestinians were shot and killed by the Israeli army — including a 14-year-old, leading the Palestinian government to accuse Israel of committing a "terrible massacre" in Gaza.

As 35,000 people demonstrated against it, the ceremony to inaugurate the US Embassy in Jerusalem got underway, starting with the US national anthem.

US Ambassador David Friedman welcomed the crowd. "Today we open the US embassy in Jerusalem, Israel," he said to applause.

Although US President Donald Trump isn't attending the ceremony, he has sent his daughter Ivanka and son-in-law, Jared Kushner. The US leader was set to address the event by video.

Earlier in the day, Trump tweeted that it was "a great day for Israel!"

Israeli Prime Minister Benjamin Netanyahu echoed Trump's sentiments at the opening ceremony: "This is a great day. A great day for Jerusalem. A great day for the state of Israel. A day that will be engraved in our national memory for generations."

The prime minister also praised Trump for his "courage" in moving the embassy.

In his own speech, Jared Kushner made reference to the protests, saying that "those provoking violence are part of the problem and not part of the solution."

Palestinian government spokesman Yusuf al-Mahmoud in a statement called for "an immediate international intervention to stop the terrible massacre in Gaza committed by the forces of the Israeli occupation against our heroic people."

It is the deadliest day in the Israeli-Palestinian conflict since 2014.

Conflicting sources have put the number of injured at between 227 and 500. The ministry said 200 were wounded by live fire.

The Israeli army said in a statement its forces were "responding with riot dispersal means and fire, and are operating according to standard operating procedures" in response to "10,000 violent rioters."

DW correspondent Dana Regev, reporting from the ceremony, said in a tweet that security has been stepped up in Jerusalem ahead of the US Embassy's opening.

US shares responsibility for 'massacre'

Turkey on Monday said the US shared responsibility with Israel for the "massacre" along the Gaza border.

"The US administration is as responsible as the Israeli government for this massacre," Deputy Prime Minister Bekir Bozdag wrote on Twitter, saying the incidents were caused by "unjust and unlawful decisions," referring to the decision to move the US embassy.

Jordan and Egypt both spoke out against the violence.  Government spokesman Mohammed al-Momani condemned Israel's use of "excessive force against the defenceless Palestinian people" and described the violence as a "crime."

In a Foreign Ministry statement, Egypt also "expressed its strong condemnation for targeting of unarmed Palestinian civilians by the Israeli occupation forces."

An Israeli soccer club has renamed itself after US President Donald Trump. Beitar Trump Jerusalem announced the name change on the eve of the formal opening of the new US Embassy in Jerusalem. (13.05.2018)