Israel marks Jerusalem Day with flowers and flags | Middle East | News and analysis of events in the Arab world | DW | 13.05.2018

As Israel marked the anniversary of what it calls the Jerusalem's "unification" following the 1967 war, two very different marches took place. Despite underlying tension, there was a joyful mood on the part of many. 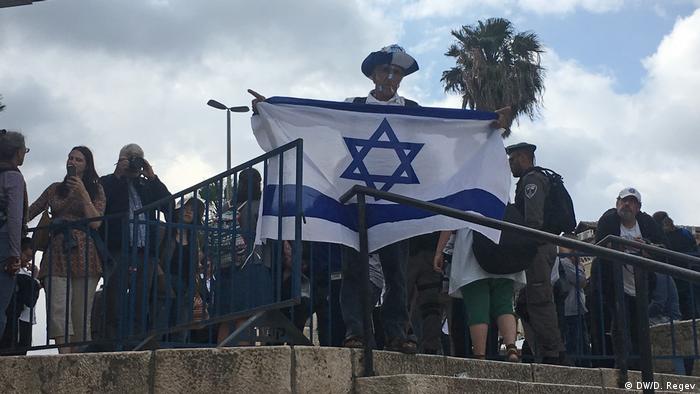 In Jerusalem's busy Jaffa Street it is almost impossible to differentiate what exactly Israeli protesters are celebrating, as they seem to have so much to choose from. With songs praising Jerusalem and loud chants of Israel's 2018 Eurovision song — which won the contest less than 12 hours earlier — the revelers are undoubtedly ecstatic.

More than 40,000 people participated in the "Flag March" according to police, a day before the US embassy's move to the city was to be made official. They were there to celebrate Jerusalem Day, which started on Saturday evening.

Some marchers chanted "Thank you Trump" and "We love America" in advance of Monday's opening ceremony, which will see a high-ranking delegation of American diplomats, including Donald Trump's daughter Ivanka and her husband Jared Kushner.

Read more: Israel marks its 70th anniversary, but not everyone shares the joy 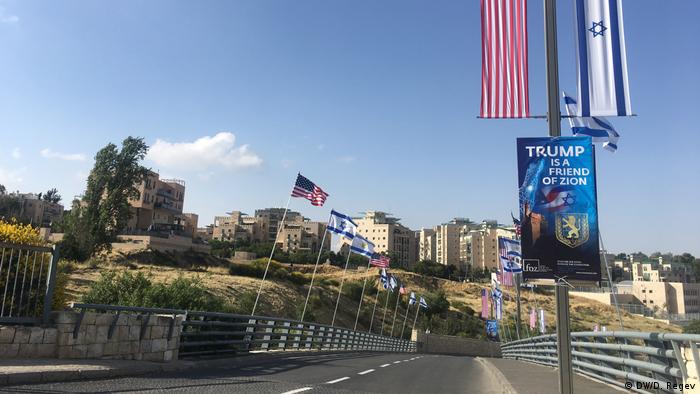 But not all the city's residents joined the festivities. Palestinians were preparing their own protests as they mark their "Nakba Day" ["catastrophe" day] on Tuesday, commemorating more than 700,000 Palestinians who fled or were expelled in the 1948 war.

Trump's decision in December to recognize Jerusalem as Israel's capital has sparked even more anger from the Palestinian side, igniting months of protests in the Palestinian territories.

Like in the previous six weeks, another mass demonstration is planned in the Gaza Strip this week, with previous clashes resulting in the death of dozens of Palestinians.

"Trump is an unstable man who's interfering in a place he understands nothing about," 23-year-old Mohammed told DW. "He is dangerous and stupid. He is not a real broker and will never be," Mohammed added.

"This city doesn't belong to you! Go away!" another Palestinian shouted at a group of Jewish marchers, who in return began singing louder and louder.

Flowers instead of chants

Thousands of police officers and military police were guarding the area of the march, with several clashes noted outside the Damascus Gate.

But together with the inevitable tension, there were also other initiatives. "We came here to hand flowers to the shopkeepers in the Old City, because sometimes the Flag March sees a lot of racist comments and chants. We came to show the Palestinians here that there are people who think differently," said 22-year-old Ayelet, holding a flower bouquet in her hands.

"Exactly," added her friend Ariel. "Even though I don't have a clear political stance, I just wanted to show people that there's no reason to take the path of hate rather than that of love and compassion."

The Flower March takes place every year to counter the Flag March, known for its participants' aggressive behavior at times. Other events organized on Facebook urge Israelis to go deliberately to small Palestinian shops and purchase anything, from vegetables to souvenirs. Police usually call Palestinians to close their stores, fearing violence by right-wing demonstrators.

"Instead of preventing the culprits from attacking the shopkeepers, police are telling them to escape," one such event stated on its Facebook page. "We will go there and change that, by buying specifically from them, with love." 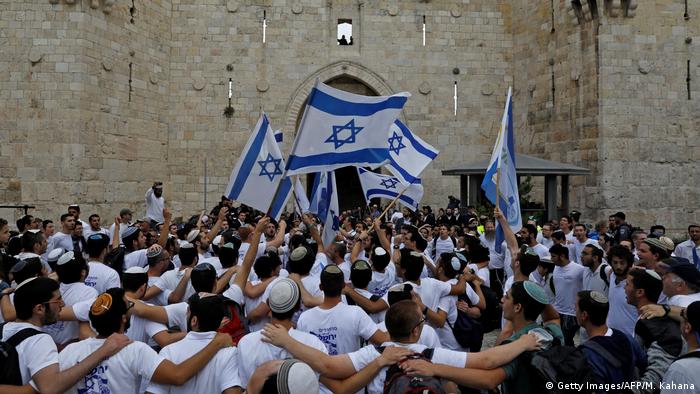 Celebrations erupted outside the Old City's Damascus gate in Jerusalem

Meanwhile, police started to cordon off the Damascus Gate, as the thousands of marchers made their way into the Old City. "We are here, and we are here to stay!" shouted one Jewish teenager waving an Israeli flag. "We will never leave Jerusalem – you are the only one," another teenager sang.

"The Jewish people are alive," "the people of Israel are strong" and other famous slogans in Hebrew could be heard all along the way from the city center to Damascus Gate.

"This day is actually crazy every year – and this time it's even worse," Leor, a 30-year-old parliamentary assistant who can't be fully identified, told DW. "Netta winning the Eurovision is one thing, but Trump's decision just adds fuel to the fire."

Many in Israel don't share the same view. "Having the embassy in Jerusalem means international recognition, it shows the world that America is on our side," says Uri Cohen, a taxi driver and Jerusalem native.

"This Jerusalem Day is special for us," Cohen continued. "Obviously this will trigger a huge mess, but you know what? This country is a mess, this city is a mess – we are already used to it. At least now we have Trump with us – and hopefully, the rest of the world will follow."