Iran's foreign minister has called on the US to act "like a normal state." And the country's president said US President Donald Trump would fail in his confrontations with Tehran. 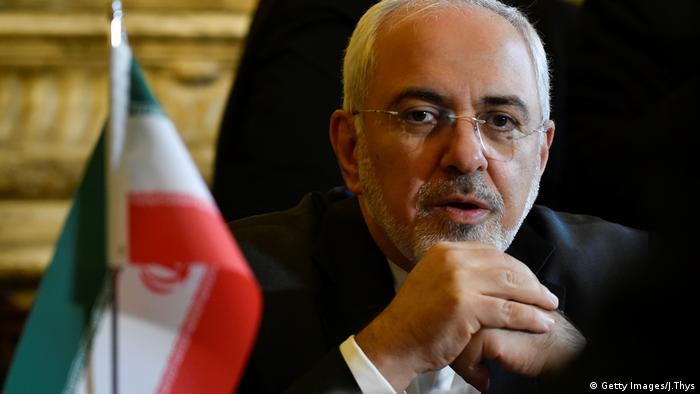 Iranian Foreign Minister Mohammad Javad Zarif said on Friday the US government was a threat to the Middle East and to global peace, while President Hassan Rouhani said Iran will not give up the weapons that are worrying Washington, as tensions between the two countries continue to escalate.

"It is true that there is a real threat to our region and to international peace and security: that threat is the Trump administration's sense of entitlement to destabilize the world along with rogue accomplices in our region," Zarif tweeted, in English. "The US must start acting like a normal state."

On Saturday, in remarks made at a military parade marking the start of Iran's 1980-88 war with Iraq, Rouhani echoed Zarif's criticisms of Washington, saying US President Donald Trump would fail in his efforts to intimidate Tehran.

"America will suffer the same fate as Saddam Hussein," Rouhani said, referring to Iraq's former dictator. "Iran will not abandon its defensive weapons ... including its weapons that make America so angry."

"The fact that the missiles anger you shows they are our most effective weapons," he said, vowing to increase "our defensive capabilities ... day by day."

The already strained relations between Tehran and Washington have further deteriorated since May, when US President Donald Trump abandoned the multilateral Iran nuclear agreement and announced a renewal of US sanctions on the Islamic Republic, ignoring pleas from the other parties involved in the negotiations, including Germany, the UK and France.

"It's not 'normal' to break international agreements and commitments against the advice of even your closest allies," Zarif wrote.

Not a 'personal agreement'

The Foreign Ministry's response came a day after Iran hit back at a US offer of negotiations, saying Washington had violated the terms of the last big deal they agreed — the 2015 nuclear deal.

The US special envoy for Iran, Brian Hook, said on Wednesday that Washington was seeking to negotiate a treaty with Iran to include Tehran's ballistic missile program and its regional behavior.

The new deal "will not be a personal agreement between two governments like the last one, we seek a treaty," Hook told an audience at the Hudson Institute think tank.

Zarif hit back on Twitter, saying the 2015 deal was not a "personal agreement" but "an international accord enshrined in a UN Security Council resolution."

"US has violated its treaty obligations too... Apparently, US only mocks calls for peace," he wrote in the tweet that was attached to a video of a protester who took to the stage after Hook's speech, shouting that sanctions were hurting Iranian people.

The five other world powers that signed the 2015 deal with the Islamic Republic — France, Germany, Britain, China and Russia — have been trying to save the deal. But so far, none of them have managed to convince Trump.

As US sanctions on Iran are set to resume, Iranian President Rouhani is visiting Europe in a bid to keep his country from economic isolation. But the ability of EU partners to make a difference remains questionable. (02.07.2018)

Trump's ploy to force countries to choose between doing business with the US or Iran is working. While German firms in Iran have been preparing for months for the sanctions, the outflow of companies is not slowing down. (21.09.2018)