As US sanctions on Iran are set to resume, Iranian President Rouhani is visiting Europe in a bid to keep his country from economic isolation. But the ability of EU partners to make a difference remains questionable. 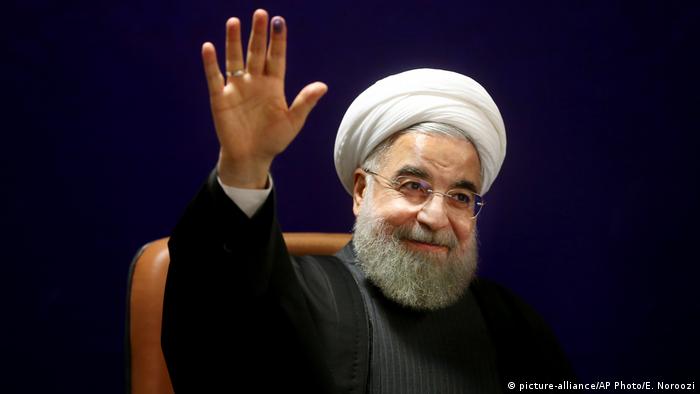 Iranian President Hassan Rouhani is visiting Switzerland and Austria this week as part of an ongoing effort to ensure European support for the 2015 nuclear agreement between Iran and world powers that was undermined by the US' withdrawal from the deal in May.

The Iranian delegation is also trying to find ways to limit damage from imminent economic sanctions announced by the US and maintain the best possible economic and trade relationship between Iran and international partners.

Austria took over the European Union's rotating six-month presidency on Sunday and the nuclear deal was signed in the Austrian capital, Vienna, in 2015. Switzerland represents US interests in Iran in the absence of formal diplomatic relations between the two countries.

Time is of the essence, as the US is putting pressure on Iran's previous economic partners. Starting on August 6, Iran is to be barred from conducting transactions using US dollars and on November 4, it will be cut off from international payment systems.

US sanctions on Iran's oil exports are also due to resume. Energy companies like Total and Citroen-Peugeot have already decided to withdraw from Iran to avoid punitive measures from the US.

Philippe Welti, the former Swiss ambassador to Iran and the president of the Switzerland-Iran Economic Chamber, was quoted in the Swiss daily, Luzerner Zeitung saying that the visit is "symbolically important for both countries," but that it would not go beyond a symbolic demonstration against US foreign policy pressure. "Rouhani's visit will not do much to change the political reality," Welti said, adding that, when in doubt, Swiss business interests would most likely side with the US.

Austria to the rescue?

As Austria took over the EU presidency on July 1, Rouhani's visit to Vienna will emphasize continuing economic partnership with the EU, despite the threat of economic sanctions from the US.

According to Mahdi Ghodsi from the Vienna Institute of International Economic Studies (WIIW), up to now, Europe has "only talked and done nothing substantial." Ghodsi told DW that there could be an opportunity for Iran, as Austria has one of the closest relationships with Iran in the EU.

"The EU could, for example, take steps within the WTO to protect its trade relations with Iran against US sanctions," said Ghodsi.

Iranian oil exports would be the primary sector in question, as they are currently around pre-sanction levels. A complete oil embargo would have a grave impact on Iran's economy.

China is the largest importer of Iranian oil, followed by India, South Korea and Turkey. Italy is the only EU country that imports significant quantities of crude from Iran.

After the landmark nuclear deal between Tehran and world powers, recovery in Iranian-EU trade has been limited, according to WIIW data.

In 2011, for instance, the 28-nation European bloc exported goods and services worth $14.5 billion to Iran, while imports from Iran amounted to about $22.7 billion.

In 2013, after the sanctions were imposed, EU exports dropped to $7.1 billion while imports from Iran dipped to $1.1 billion.

In 2016, the first year after the nuclear deal, exports rose to $9 billion, although imports remained below $5.8 billion.

Iranian analyst Ghodsi believes that the EU has very limited scope when it comes to persuading companies to continue to do business in Iran despite the impending US sanctions.

Against this backdrop, it's unlikely that Rouhani's European trip will produce any outcome that meets the demands of Iranian hardliners, who have rejected the nuclear deal since the beginning.

These forces, represented by Supreme Leader Ayatollah Khamenei, also strictly reject the idea of negotiating with the EU about Ira​n's missile program, which fall under a separate UN sanctions regime, or Tehran's anti-Israel Middle East policy.

Observers say this makes it even more difficult for the EU to lobby Washington on behalf of Iran.

Recently, Austria's Chancellor Sebastian Kurz issued a clear statement regarding his country's commitment to Israel. Addressing several hundred delegates to the American Jewish Committee (AJC) in Jerusalem, Kurz said: "The security of Israel is not negotiable for us. Israel will stay on the map and Iran will have to make friends with it."

President Hassan Rouhani: 'Iran will produce any weapons we need'

While insisting Iran does not pose a threat to its neighbors, President Hassan Rouhani said his country would build or buy any weapons it needs. He said arms were needed because "we are not living in a normal region." (18.04.2018)