The protests in Iran are entering their second week. With the regime also organizing demonstrations, the situation is confusing. But DW's Matthias von Hein says calls for regime change are counterproductive. 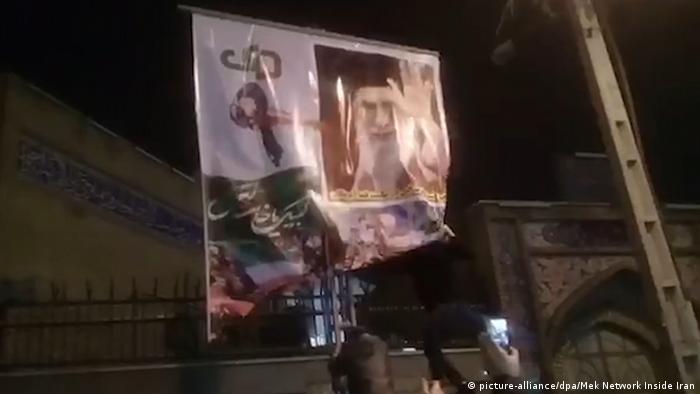 It is the winter of discontent in Iran.A young population is rebelling. They've had enough of empty promises, enough of hollow religious and political slogans. The seeds for this wave of protests were sown with neoliberal economic policies that threw millions of people into poverty, rampant corruption, inadequate handling of an earthquake, and environmental disasters such as the rapidly dwindling water supply.

The tipping point came over the price of eggs, which had increased dramatically after the mass culling of chickens to contain an outbreak of bird flu. Local protests swelled into a wave of national unrest.

No leadership, no agenda

But is this a revolution? One that could herald the end of Iran's theocratic system? It's doubtful. The strengths of this movement are also its weaknesses. Given the lack of a clearly recognizable leadership and the decentralized, spontaneous nature of the protests, the regime can't simply arrest the figureheads and snuff out the revolt. But conversely, aside from the calls for better social conditions, there's no clear agenda – just contradictory demands.

In the meantime, the regime has been able to mobilize its supporters in impressive numbers. And let's not forget: it has militia, the military, the police, and the secret service – who all have too much to lose to join in the protests. And they have shown us in the past that they are willing to brutally suppress the protests.

In the roughly four decades of Iran's theocracy, there has been a large protest movement every 10 years. Most recently, the "green movement" in 2009 saw millions of people on the streets with a clear agenda and a clear leadership. It too, was suppressed in a bloody fashion – something that partly explains the reticence of the 2009 veterans to participate in the current protests.

Cracks in the establishment

Today's protests are highlighting the cracks in the establishment. Hardliners and moderate forces – there aren't really any true moderate or reform-oriented forces in Tehran's circles of power – are vying for power and influence. They are trying to use the protests to weaken their opponents and to position themselves for the era that will follow the aging Supreme Leader Ali Khamenei.

How should foreign powers react to the protests in Iran?

Clearly, the demonstrators deserve our unequivocal solidarity. Demonstrating and free expression of opinion is a basic human right everywhere in the world, including Iran. We need to pressure Tehran to force the government to stick to its own rules.

President Hassan Rouhani has at least acknowledged that protest is allowed in Iran. This pressure can also be applied economically. Given the country's dismal economic situation, Iran needsforeign investment. Internet companies should also be required to keep open platforms for the free exchange of opinions.

However, outright calls for regime change like we've heard from the United States are counterproductive. This only fuels conservatives' arguments that the protests are being controlled from abroad. Iranians are also not buying President Trump's newly discovered sympathy for Iranians. They still remember the travel ban he imposed on their country – directed not just against ordinary Iranians, but also against political refugees.

Opinion: The EU's spirit is willing, but the flesh is weak 22h ago