President Hassan Rouhani: 'Iran will produce any weapons we need'

While insisting Iran does not pose a threat to its neighbors, President Hassan Rouhani said his country would build or buy any weapons it needs. He said arms were needed because "we are not living in a normal region." 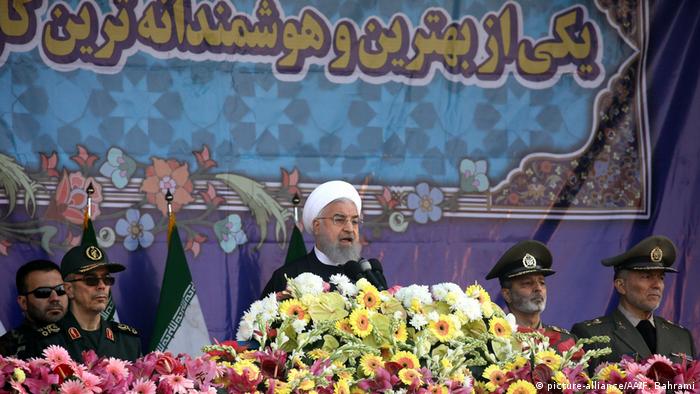 Iranian President Hassan Rouhani on Wednesday said his country would continue to make or buy whatever weapons it needed to defend itself.

"We tell the world that we will produce any weapons that we need, or if necessary we will procure them. We have not been waiting ... and will not wait for your remarks or agreement," Rouhani said at a military parade in Tehran marking Army Day.

The Iranian president stressed to neighboring countries that the weapons were not intended to be used on them, saying "we do not intend any aggression against you."

"We want friendly and brotherly relations with our neighbors, and we tell them that our weapons, our equipment, our missiles, our planes, our tanks are not against you, it is for deterrence," said Rouhani.

"The only way to resolve problems is political negotiation and peaceful behavior," he added.

'Not a normal region'

Rouhani said Iran may need weapons to defend itself because "we are not living in a normal region."

"We see invading powers have built bases around us. Disregarding the principles of international law, they intervene in regional affairs and invade other countries without UN permission," Rouhani said.

United States, British and French forces launched airstrikes on Iran's ally Syria early on Saturday in retaliation for a suspected chemical weapons attack on rebels in Syria's eastern Ghouta on April 7, which they attribute to Syrian President Bashar Assad's government.

Britain, France and Germany have considered new EU sanctions on Iran over its ballistic missiles and its role in Syria’s war, as part of efforts to encourage US President Donald Trump to uphold the 2015 Iran nuclear deal.

US President Donald Trump has threatened to withdraw from or revise the 2015 nuclear deal that saw sanctions on Iran lifted in exchange for it dismantling its nuclear program unless new restrictions are imposed on its missile program and other areas. US sanctions will go into effect if Trump does not sign a new waiver showing Iran in keeping its part of the nuclear deal before May 12.

The good news is that World War III has not started. But the bad news is that nothing in Syria will be improved by Western powers' airstrikes, writes Christian F. Trippe. (14.04.2018)

Iran has disclosed plans to develop nuclear reactors for ships, despite a deal with world powers that curtails its atomic program. The project is likely to get a cool response in Washington. (23.02.2018)