This weekend, Iranian President Hassan Rouhani heads to China to participate in a Shanghai Cooperation Organization summit. Will China and Iran bolster their ties in light of Trump pulling the US out of the nuclear deal? 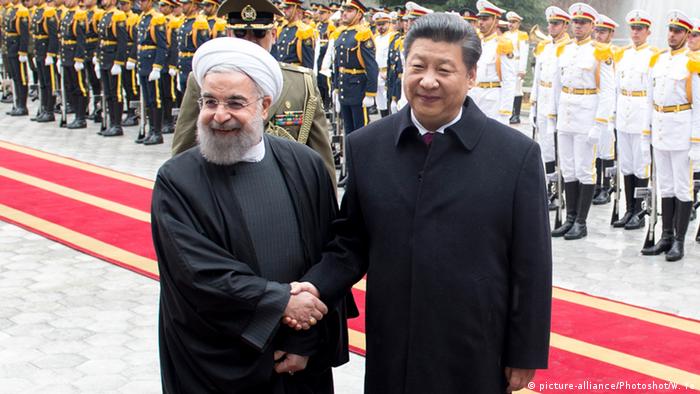 The Shanghai Cooperation Organization (SCO), a regional security bloc led by China and Russia, is set to hold its 18th annual gathering in the Chinese city of Qingdao on Saturday (June 9) and Sunday. Iran is currently an observer member of the SCO, though it has long sought full membership.

The event will be chaired by Chinese President Xi Jinping. The participants — including leaders from four ex-Soviet Central Asian republics and two new members, Pakistan and India — will discuss matters of international security and trade, with shoring up the Iranian nuclear deal likely to be on the top of the agenda. In May, US President Donald Trump announced that the United States will withdraw from the deal, which aimed to contain Tehran's nuclear program in exchange for lifting Western sanctions on the Islamic Republic.

China, along with the European Union and Russia, also signed onto the deal with Iran. The Chinese had been ardent supporters of the agreement, according to Kerry Brown, professor of Chinese Studies at King's College, London.

"In 2015 when the deal was signed, China was a leading party and it was one of first international collaborations that China got involved in," Brown told DW. "It thus has a symbolic importance, because it is really the first time that China had participated in a multi-party deal. So I think that the Chinese are quite disappointed that Trump withdrew and felt that it was a squandering of diplomatic effort," he said. Brown believes that the Chinese will reassure the Iranians of their commitment toward the deal at the SCO summit.

Bernt Berger, a senior fellow at the German Council on Foreign Affairs, told DW that China actually can draw some advantages due to the US withdrawing from the deal. "With the US pulling out of the deal China has noticed a range of advantages," Berger said. "In the past, Tehran has preferred European over Chinese technologies. However, European firms have avoided possible Iranian contracts because of the uncertainties about US policy. These uncertainties are now gone," Berger said.

Iran and China already have a strong relationship, as China is Iran's biggest trading partner. The Belt and Road Initiative (BRI), an ambitious project launched by President Xi aiming to link China with other parts of Asia and Europe through multibillion dollar investments in infrastructure, also plays a role in strengthening their economic partnership.

Iran is a key transport hub between Asia and Europe. According to Berger, "Iran provides maritime access to land-locked countries and if China manages to build a high-speed railway across Central Asia, the Central Transport Corridor is faster and poses less hurdles in terms of rail-track standards and customs than the Northern route via Moscow."

Furthermore, Iran and China can trade in the Chinese yuan, which means that they can avoid US control that looms large over US dollar transactions. The SCO conference is an opportunity for Tehran and Beijing to further deepen economic ties and draw on the unique mutual advantages of their relationship.

Iran has 'no choice' but to turn eastward

According to Holly Degres, an Iran analyst and curator of The Iranist newsletter, Iran is under pressure as America renews harsh sanctions intended to "crush" the Iranian government. The Iranians therefore will have to lean on countries like China in order to make up for the economic losses due to the sanctions. "Tehran has no choice, but to refocus its economic ties on countries like China and Russia," Dagres told DW. "These are allies that receive the same amount of scrutiny from the US government to an extent, and working together makes them stronger together," she said. She said that Iran told Total, a French energy company, that if they don't secure a sanctions waiver, the South Pars oil field project will go to a Chinese state-owned company.

"The Iranian government and its people would like to be recognized as a regional power and major economy, but given that they are almost back to square one with the US withdrawal, it's going to be hard to see it making headway any time soon," Dagres said. "Iran will now try to push harder to join groups like the SCO, but given that they were denied entry due to sanctions in the first place, it's hard to see Beijing changing its mind."