Iran lists tough conditions for Europe to save nuclear deal

Iran's supreme leader, Ayatollah Ali Khamenei, has given tough terms to Britain, France and Germany if they want to save the 2015 nuclear deal. Pledging not to seek new talks on Iran's ballistic missiles is one of them. 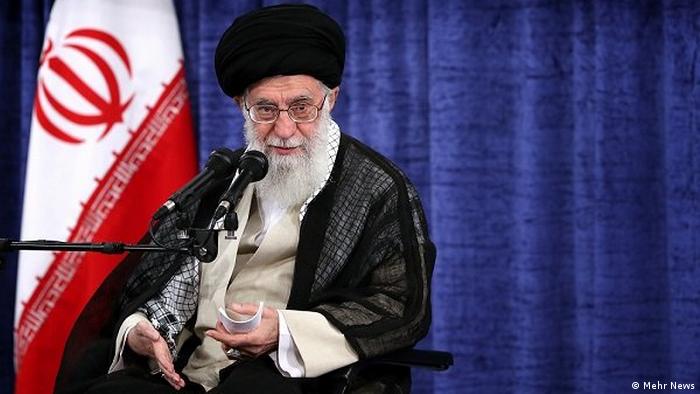 Iranian leader Khamenei on Wednesday published conditions the three European signatories of the 2015 Iranian nuclear deal — Germany, Britain and France — must accept to guarantee Iran stays in the agreement.
The move came as the three countries scramble to salvage the accord in the wake of the US's withdrawal.

What the three European countries must accept:

'We don't trust them'

Khamenei said, "We do not want to start a fight with these three countries [France, Germany and Britain] but we don't trust them either." He also warned that Iran would continue its enrichment of uranium if the terms are not met.

Scramble for Iran: All three European countries have sharply criticized US President Donald Trump's May 12 decision to withdraw Washington from the deal and have vowed to discuss how to save it with Iran and the other signatories — China and Russia.

Read more: Could America's hardline policies towards Iran be a dilemma for Arab countries?

Sticking points: Khamenei's terms put the three European powers in a bind. They have tried to reassure Washington that it would be possible to renegotiate the current deal to curtail Iran's ballistic missile program and its aggressive foreign policy in the Middle East.

Pompeo's vision: On Monday, US Secretary of State Mike Pompeo demanded all signatories negotiate a fresh treaty that would encompass not only Iran's nuclear program, but its defense and foreign policies as well. He warned Iran would face "the strongest sanctions in history" if it did not agree to make changes.