US ready to talk with Iran 'with no preconditions': Mike Pompeo

The US secretary of state's statement came a day after Iranian President Rouhani suggested that Tehran was not opposed to talks with Washington. US-Iran tensions have escalated significantly over the past several weeks. 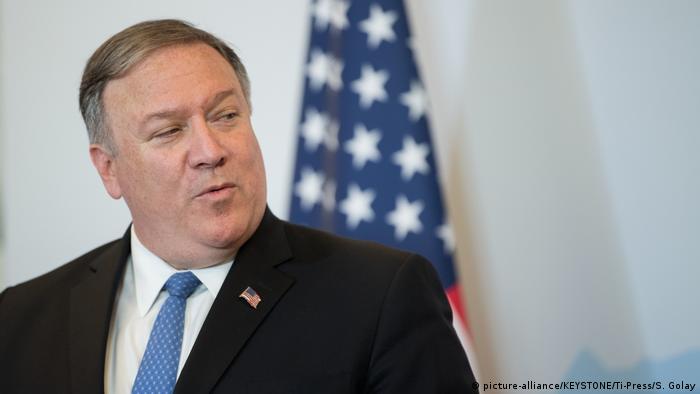 US Secretary of State Mike Pompeo said Sunday that Washington was willing to hold talks with Iran to lower tensions in the Persian Gulf "with no preconditions."

"We are prepared to engage in a conversation with no preconditions. We are ready to sit down with them," Pompeo told a joint news conference in Switzerland with Swiss Foreign Minister Ignazio Cassis, adding however that "the American effort to fundamentally reverse the malign activity of this Islamic Republic, this revolutionary force, is going to continue."

Tensions between Washington and Tehran have escalated significantly over the past month, with the US accusing Iran of continued malign activity and unspecified threats against the United States and its allies. Washington has also increased its military presence in the region.

Responding to Pompeo's remarks, Iranian President Hassan Rouhani said on Sunday that the US needed to return to the negotiating table and stick to the 2015 nuclear deal.

"The other side that left the negotiating table and breached a treaty should return to a normal state," he said in comments reported on the government website.

Rouhani added that the offer of talks without pre-conditions as a sign of Iran's strength: "The enemies sometimes say they have conditions for negotiations with Iran... but in recent weeks they said they have no conditions. They threatened us as if they were a military superpower, but now they say they do not seek a war."

Iranian President Hassan Rouhani on Saturday suggested that Tehran would be open to negotiations with the US if Washington showed respect and abided by international rules. But he said Tehran would not allow Washington to force it to the table.

'We aren't looking for regime change'

On Monday, Trump, who unilaterally withdrew from the Joint Comprehensive Plan of Action (JCPOA), also known as the Iran nuclear deal, in May 2018, said, "It [Iran] has a chance to be a great country with the same leadership … We aren't looking for regime change — I just want to make that clear."

The recent escalation of tensions has fueled speculation that foreign policy hawks in the Trump administration, such as National Security Adviser John Bolton and Secretary of State Mike Pompeo, may be pushing the president toward the idea of regime change in Tehran.

Washington has increasingly burdened Iran with ever more sanctions in an effort to force Tehran to accept harsher restraints to its nuclear program. Trump has consistently called the JCPOA a terrible deal as it does not do enough to curtail Iranian nuclear development.