Iran remains within the limits set by the 2015 nuclear deal with major powers, the IAEA has said. The accord has unraveled after the US withdrew from the deal, sanctioned Iran and sent more troops to the Middle East. 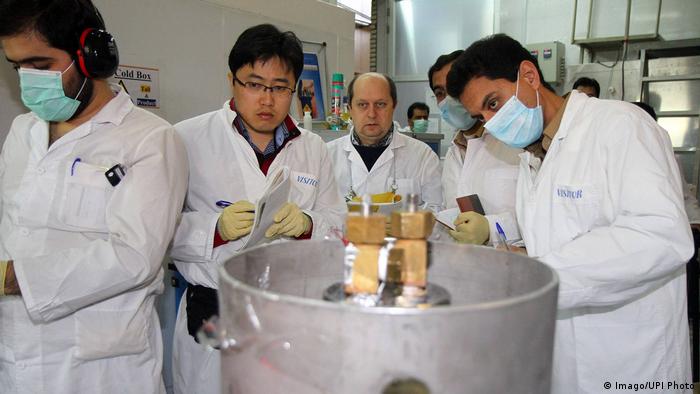 Iran's enriched uranium and heavy water stocks grew but did not exceed the ceilings set in the 2015 agreement, the UN's nuclear watchdog agency, the International Atomic Energy Agency (IAEA), wrote in a quarterly report published Friday.

Read more: US to sent extra troops to Middle East

As of May 20, Iran had 174.1 kilograms of enriched uranium, up from 163.8 kilograms in February but again below the relevant of limit 300 kilograms, it added.

"Technical discussions in relation to the IR-6 centrifuges are ongoing," it said.

Iranian President Hassan Rowhani on May 8 threatened a gradual exit from the deal and gave major powers, including Germany and China, until early July to persuade US President Donald Trump's administration to lift oil and banking sanctions.

"The situation in the Persian Gulf and the region, and the situation surrounding the Vienna nuclear agreement is extremely serious," said the German Foreign Ministry.

Dialogue was "very important" to avoid the risks of escalation, including "misunderstandings and an accident," the ministry added.

Iran's state news agency, Irna, quoted Iranian Deputy Foreign Minister Abbas Araghchi as telling Plötner that Germany and the other 2015 treaty partners were obligated to uphold the deal, despite the unilateral exit announced last year by US President Donald Trump.

The 2015 deal, intended to keep Iran from obtaining a nuclear weapon, promised economic incentives in exchange for limits on Tehran's nuclear activities.

Citing an alleged threat from Iran, the United States has sent an aircraft carrier to the Persian Gulf and increased the number of troops in the region by 1,500.