US to send 1,500 troops to Middle East for 'protection' against Iran

Both President Trump and the Pentagon stressed that they were not seeking to engage in a military conflict with Iran. Trump has been trying to pressure Tehran into negotiating a new nuclear deal. 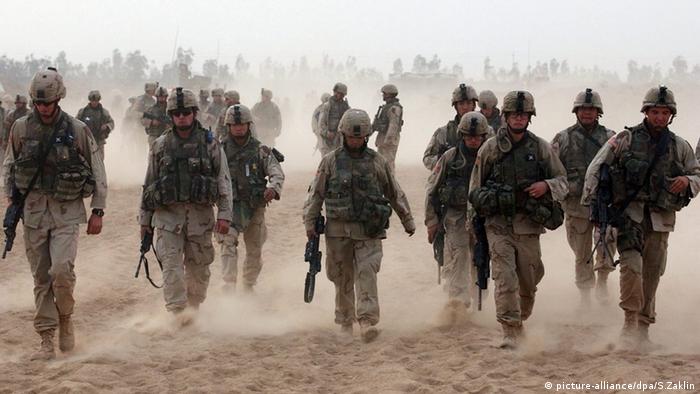 US President Donald Trump said on Friday that he would send some 1,500 soldiers to the Middle East as "protection" amidst a rise in tensions with Iran. At the same time, he downplayed the suggestion of a military conflict.

"We want to have protection in the Middle East," he said. "We're going to be sending a relatively small number of troops, mostly protective.

"Right now, I don't think Iran wants to fight. And I certainly don't think they want to fight with us," Trump said, adding, "but they cannot have nuclear weapons."

Pentagon: We are not seeking hostilities

Rhetoric between Tehran and Washington has become increasingly hostile since Trump imposed new sanctions in the past few weeks, with the aim of forcing Iran to renegotiate the 2015 nuclear deal that the president pulled the US out of.

Earlier this month, the US moved bombers, Patriot missiles and a carrier strike group to its Middle East bases.

The Pentagon said the troop movement was in response to several incidents it believes were caused by the Iranian government. This includes a rocket attack in Baghdad's Green Zone, four oil tankers that were sabotaged with explosives in the Gulf and a drone attack on a Saudi oil installation.

"We view this as a campaign," said Rear Admiral Michael Gilday, director of the Pentagon's Joint Staff.

"We think that through a combination of a very measured deployment of assets as well as public messaging, we are again trying to underscore that we are not seeking hostilities with Iran."

A Russian lawmaker on Friday warned that Moscow might raise the topic of the US deployment at the next meeting of the UN Security Council.

Envoy Jens Plötner had been involved in drawing up the 2015 JCPOA treaty and went to Tehran with the aim of seeing it preserved. He was told that Iran's patience was over. (23.05.2019)