Iran gas pipeline deal with Pakistan hampered by US sanctions | Asia | An in-depth look at news from across the continent | DW | 20.05.2019

Iran gas pipeline deal with Pakistan hampered by US sanctions

Pakistan has backed out of a joint gas pipeline deal with Iran due to the threat of US sanctions. Pakistan could face a heavy financial penalty, as it promised to complete the project in a bilateral agreement with Iran. 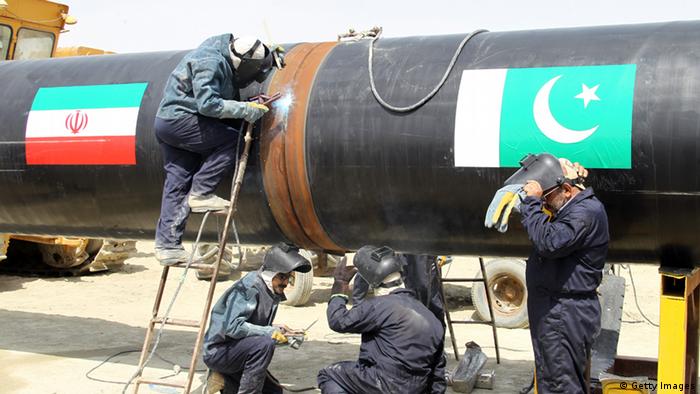 Plans to complete a pipeline delivering Iranian gas to Pakistan stalled after Pakistan's energy ministry said last week that it could not continue with the project as long as Tehran was subject to US sanctions.

The pipeline agreement was first signed by Iran and Pakistan in 1995, and the US has repeatedly opposed the deal.

Iran completed its section of the pipeline in 2011, and reportedly offered Pakistan $500 million (€448 million) to help with construction. The estimated total cost of the pipeline is $7 billion (€6.2 billion).

The deal was originally conceived to deliver Iranian gas to India via Pakistan, but New Delhi withdrew from the agreement because of security issues and high costs.

Pakistan had singed an agreement to construct its section of the pipeline by the end of 2014. Under the conditions of the agreement, Pakistan could be subject to billions of dollars in penalties if it abandons the project.

Pakistan has stepped up its imports of liquefied natural gas (LNG) from Qatar, and has also been importing LNG from the US since 2017. At the end of 2018, more than 40% of Pakistan's power demand was met by LNG.

"If Pakistan can attract foreign capital to build its infrastructure in the energy sector, it will not be easy to realize the Iran-Pakistan pipeline project," he said. "US sanctions are another factor that forces Pakistan to find a better alternative to Iran."

According to Kalshsar, increased tension between Tehran and Riyadh has spurred Saudi Arabia to try and reduce Iran's role in providing regional energy security.

Additionally, during his visit to Pakistan in February, Saudi King Salman proposed various energy projects, suggesting that Saudi Arabia could replace Iran as Pakistan's energy provider — at least in the short term.

In February, Iran sent a formal letter to Pakistan and said that it was going to seek legal recourse if Pakistan backed out of the pipeline deal.

Pakistan reportedly asked Iran to reconsider, and said it was seeking funds to construct the pipeline, but had failed to find international support due to US sanctions on Iran.

However, Peter Frankopan, professor of global history at Oxford University, told DW that the pipeline deal would have been problematic even without US sanctions for "cost, security and strategic" reasons.

Iran currently exports 36.24 million cubic meters of gas every day. And although Tehran has announced plans to increase gas exports, its current share in the global natural gas market is less than 1%.

"This project appears to be dead in the water," Michael Kugelman, a South Asia expert at the Washington-based Woodrow Wilson Center for Scholars, told DW.

"Tensions between India and Pakistan, resistance from Pakistan's Saudi ally, and the US sanctions regime on Iran are also formidable obstacles and preclude any forward movement."

Fatemeh Aman, a senior fellow at the Atlantic Council, a US international affairs think tank, told DW that Pakistan lacks both the funds and the will to complete the pipeline, and it does not want to spoil relations with its allies.

"Pakistan's economic situation is much worse than when the project started," said Aman, adding that the pipeline would have had an enormous impact on the geopolitics of the region.

"Any multinational economic project, especially in the volatile South Asia region, could benefit the entire region and enhance its security," she said. "However, considering the current standoff between Iran and the US, along with the opposition of Iran's neighboring Arab states to this pipeline project, it seems that the project will not survive."