Saudi Arabia's UN ambassador has said ties would be restored when Iran stops "interfering" in other countries' internal affairs. The dispute follows an attack on Saudi diplomatic missions in Iran over the weekend. 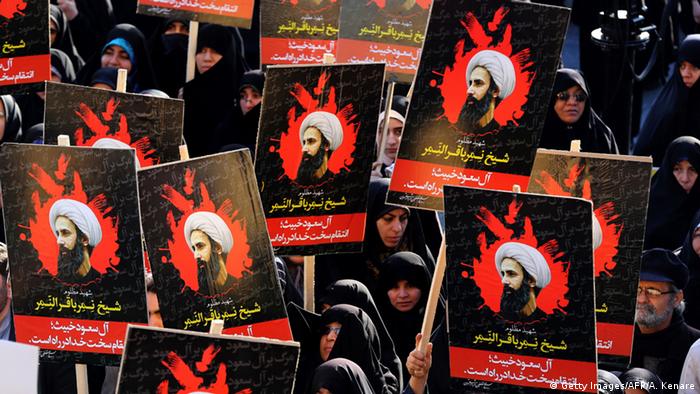 Saudi Ambassador Abdallah Al-Moualimi told reporters on Monday that Iran's "interference" in the internal affairs of Saudi Arabia and other Arab countries was to blame for the diplomatic rupture.

As part of the measures to sever ties, Saudi Arabia's civil aviation authority also confirmed late on Monday that all flights to and from Iran had been cancelled.

The ongoing dispute broke out after Iranian protesters ransacked the Saudi embassy in Tehran on Sunday, in response to the execution of Shiite cleric Sheikh Nimr al-Nimr in Saudi Arabia a day earlier.

Al-Nimr - a longtime critic of the conservative Sunni kingdom's discrimination against Shiites - was among 47 people executed in Saudi Arabia on Saturday, many of whom had been convicted on terrorism-related charges.

Following the execution of Shiite cleric Nimr Al-Nimr tension between Saudi-Arabia and Iran has been mounting. DW's Kersten Knipp believes that both countries' leaders are deeply cynical and welcome these developments. (04.01.2016)

Iran has summoned Saudi Arabia's charge de-affaires in Tehran in protest of prominent Shiite cleric Nimr al-Nimr’s execution. His execution has also drawn threats of a backlash against the ruling Al Saud family. (02.01.2016)

In response to concerns raised by UN Secretary-General Ban Ki-moon over the fairness of Saudi Arabia's judicial proceedings, the kingdom's UN Mission insisted that it had granted "fair and just trials" to those executed.

Saudi Arabia's Gulf Arab neighbors, including Bahrain, Sudan and the United Arab Emirates (UAE), severed diplomatic ties with Iran. Sudan denounced the "brutal" attack on the Saudi embassy as being "in clear violation of international law." On Tuesday, Kuwait also recalled its ambassador to Tehran.

The diplomatic ruction has sparked global concern, with the UN chief telling Saudi Foreign Minister Adel Al-Jubeir that the break was "deeply worrying."

German government spokesman Steffen Seibert on Monday called on Saudi Arabia and Iran to repair ties, appealing to "both countries ... to use all possibilities to improve their bilateral relations."

In Washington, White House spokesman Josh Earnest called on "all sides to show restraint and not inflame tensions."

Both Iran and Saudi Arabia are due to attend the next round of Syria peace talks in Geneva on January 25. The Saudi ambassador said that the break in diplomatic relations should have no effect on upcoming talks.

"We will continue to work very hard towards supporting the peace efforts in Syria, in Yemen," said Al-Moualimi.

It was not immediately clear, however, whether an Iranian representative would be present at the talks.