Syria's complex and devastating civil war has drawn in multiple foreign powers since it broke out in 2011. With Russia and Turkey seeking new solutions, DW examines where the major players stand on the conflict. 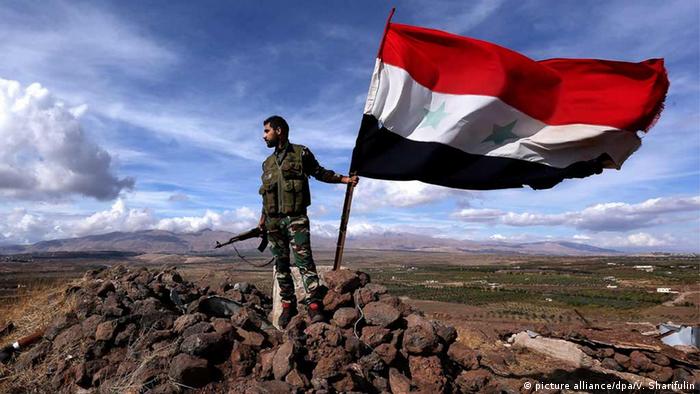 — Who it supports: Washington had given weapons and military training to moderate rebel factions fighting against government forces loyal to President Bashar Assad, but the US ended military aid in 2017 and later cut some $230 million (€198 million) in reconstruction aid. The US has provided air support and weapons to the Syrian Democratic Forces (SDF), an alliance of Kurdish and Arab forces fighting against "Islamic State" (IS) militants in northern Syria. Several hundred US special forces were deployed alongside the SDF.

— Who it's fighting against: The US has been leading an international coalition of nearly 60 countries, including Germany, targeting IS and other extremist groups with airstrikes since late 2014. The US has largely avoided direct conflict with pro-regime forces, but in 2017 US President Donald Trump ordered airstrikes on a Syrian airbase in response to a government chemical weapons attack against civilians. He surprised allies in December when he announced the unilateral withdrawal of US troops in Syria, saying: "We have defeated ISIS in Syria."

His own advisers later walked back that statement leaving US allies unclear what the country's exact policy would be.

— What it wants: The US had remained steadfast in a commitment to trying to destroy IS in Syria and Iraq. However, its intentions on other issues have become unclear. In 2017, Trump told reporters that the US has "very little to do with Syria other than killing IS." But up to that point it had been deeply involved in brokering a ceasefire between government and opposition forces. The Trump administration has also given conflicting signals as to whether the US would oppose a peace deal keeping Assad in power. The US also seeks to block Iran and the Lebanese Shiite militia Hezbollah from establishing a permanent presence in Syria that could threaten Israel.

— Which peace talks it supports: Washington has supported UN peace talks held in Geneva since 2012 between representatives from the Assad government and the Syrian opposition. But those talks have so far failed to reach a breakthrough. Both sides have disagreed about whether Assad's departure should be a precondition for any final settlement.

Read more:Donald Trump's motives for Syria withdrawal remain as murky as its implementation

— Who it supports: Moscow has long backed the Assad regime. It has provided government troops with air support and weapons and given it diplomatic backing at the UN and in international peace talks. Russia also has troops on the ground.

— Who it's fighting against: Russia first intervened in Syria in September 2015 when it started airstrikes against "terrorist" targets. While Moscow has said it is targeting IS and other terrorist groups, US officials have repeatedly countered that claim by saying Russian airstrikes are primarily directed against non-IS rebel forces fighting the Assad government. The Kremlin, meanwhile, has accused the US of using its campaign against IS as a way to slow Russian and Syrian government military advances.

— What it wants: Moscow wants to keep Assad — its closest ally in the Middle East — in power and secure its military influence in the region. It has an important military airbase in the western province of Latakia and a naval base in the Syrian port city of Tartus. Russian leaders support a peace deal with broad consensus among Syria's moderate factions that would allow Assad to remain in power. It has also hinted it may support limited autonomy for opposition forces in certain regions within Syria.

— Which peace talks it supports: While supporting the Geneva negotiations, Moscow has also sponsored talks between the Syrian government and the opposition in Astana, Kazakhstan that began in January 2017. Iran and Turkey are also parties to the talks. The Astana process strives to create "de-confliction zones" that can reduce violence and pave the way for political talks.

— Who it's fighting against: Ankara conducted airstrikes against IS targets as part of the US-led coalition. It has also carried out unilateral airstrikes against Kurdish opposition forces in northern Syria and sent ground forces into Syria to fight IS and Kurdish forces as part of the Turkish-led operation known as "Euphrates Shield." As part of a "de-confliction zone" agreed to with Russia and Iran, Turkey has also moved into Idlib province alongside rebels it backs.

— What it wants: Ankara wants to block Syrian Kurdish territorial gains and prevent them from gaining autonomy in any post-war settlement. Turkey says that Syrian Kurdish fighters are tied to the Kurdistan Workers' Party (PKK), which has fought a more than three-decade war in Turkey and which is regarded as a terrorist group by Turkey as well as the European Union and the United States. Turkey wants a so-called "safe zone" in northern Syria and has pushed the US to disarm Kurdish militias. Turkish leaders have been ambivalent on whether Assad should be allowed to stay in power in a final peace deal.

— Which peace talks it supports: Turkey has been heavily involved in the Geneva talks and has co-sponsored the Astana negotiations. It has staunchly opposed Kurdish factions attending peace talks.

— Who it supports: Tehran has supported the Assad government since at least 2012, giving the regime extensive military aid in the form of training, weapons and intelligence sharing. It has also deployed Iran's elite military force, the Islamic Revolutionary Guard Corps (IRGC), and Shiite militias from across the region.  Its ally Hezbollah in Lebanon is also a major backer of the Assad regime.

— What it wants: Syria has long been Iran's chief ally in the Middle East. Propping up Assad ensures an ally against Iran's regional rivals, Israel and Saudi Arabia. Tehran also needs Syria to transport weapons to Hezbollah, which also opposes Israel, in neighboring Lebanon. Iran's larger goal is to create a land corridor extending from Iran to Lebanon through Iraq and Syria.

— Which peace talks it supports: Iran joined the Geneva peace talks in November 2015 after the US dropped its longstanding opposition to Iranian involvement. Tehran has also sponsored the Astana peace talks along with Turkey and Russia.

Russia's military campaign objectives "have been almost accomplished," according to an influential lawmaker. With talks gearing up, the UN's chief negotiator said the peace process had reached a "moment of truth." (30.10.2017)