At the Astana ceasefire talks, Russia, Turkey and Iran have agreed to create four safe zones in Syria. The Damascus regime "fully backed" the Russian initiative as opposition delegates walked out in protest. 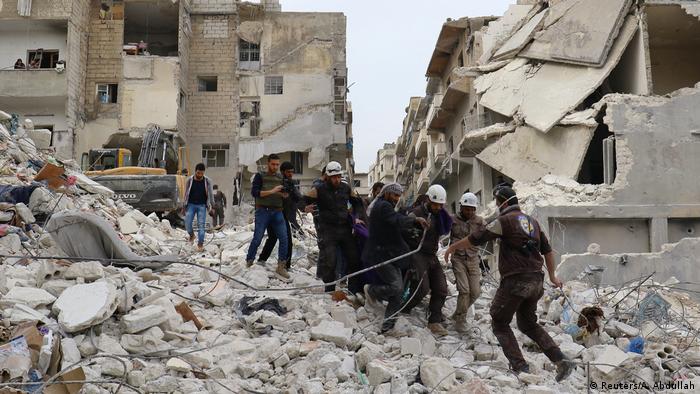 The agreement made on Thursday among the three delegates at the Syria ceasefire talks in Kazakhstan designated four "de-escalation zones" in northern, central and southern Syria.

The head of Russia's delegation, Alexander Lavrentyev, said the agreement would go into effect on Saturday and Syrian air forces were expected to cease their flights over the areas. He added that the Syrian government would abide by the agreement unless there were attacks by rebel groups in the designated zones.

Russia's Vladimir Putin is confident "safe zones" in Syria's rebel-held areas would deliver a ceasefire that will hold. The 6-year-long conflict dominated Putin's talks in Sochi with Turkish President Erdogan. (03.05.2017)

Iran and Russia will set the agenda at the Astana talks as the president's "protecting powers" have effectively taken control of government, writes DW's Kersten Knipp. The US is to send a representative to the talks. (02.05.2017)

From safe zones to terrorism, Trump talks Syria with Putin

Speaking by phone with his Russian counterpart, US President Donald Trump has discussed ways to improve conditions on the ground in Syria. The leaders also agreed to meet on the sidelines of the G20 summit in Hamburg. (03.05.2017)

Russia and Iran have given their backing to Syrian President Bashar al-Assad's regime while Turkey has backed opposition rebels. There has been increasing contact between Ankara and Moscow in recent weeks.

While there was no Syrian signature on the document, late on Wednesday Syria's Foreign Ministry said Damascus was "fully backing" the Russian initiative on the four ceasefire areas, according to the state-run SANA news agency. This was confirmed by Syria's chief negotiator at the talks on Thursday.

'Step in the right direction'

Present at the signing of the memorandum, UN Syria envoy Staffan de Mistura said the plan was a step in the right direction toward a real cessation of hostilities.

"Today in Astana I think we have been able to witness an important promising positive step in the right direction in the process of de-escalation of the conflict," de Mistura told reporters in Astana. 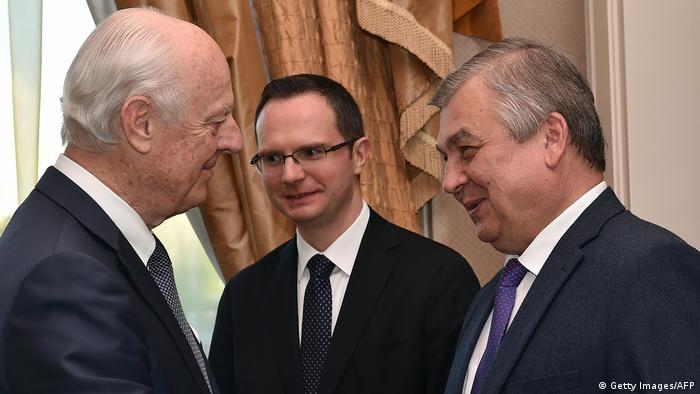 The United States gave a cautious welcome to Thursday's deal, saying it was concerned about Iran's role as a "so-called 'guarantor,'" the State Department said.

Russia's Lavrentyev said Moscow was ready to work more closely with the US and Saudi Arabia.

"Unfortunately, the Americans are still ignoring our attempts to establish closer military cooperation but we will keep trying," Lavrentyev said, adding that Moscow was ready to send its observers to the designated zones.

Turkey's Foreign Ministry issued a statement on Thursday saying the agreement designated "non-conflict zones" in the whole of Idlib province, parts of Lattakia, Aleppo and Hama provinces, and also parts of Homs province and the Damascus suburb of Eastern Ghouta. It would also apply to areas of Daraa and Quneitra provinces.

The ministry added that Turkey would continue efforts to ensure the ceasefire holds so a political solution in Syria could be facilitated.

Talks on Wednesday between Turkish President Recep Tayyip Erdogan and Russian President Vladimir Putin suggested that military flights over safe zones could be prohibited and the warring sides would be separated by "security lines."

Meeting in the Russian resort town of Sochi, Putin said on Wednesday that relations had been restored with Turkey following a deterioration when Turkish forces shot down a Russian warplane at the Syrian border in November 2015. 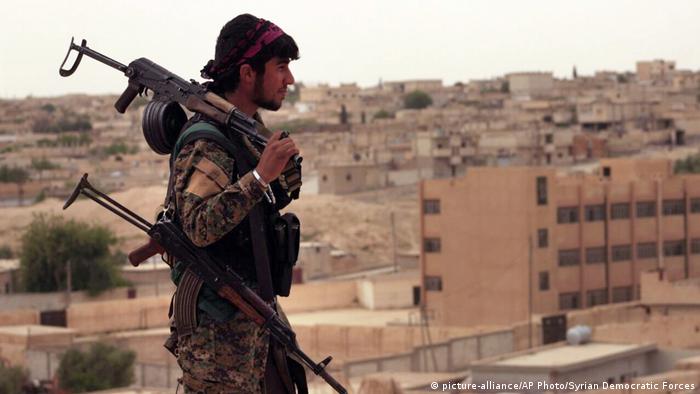 Fighting in Syria has been raging for more than six years

Opposition delegate Osama Abu Zaid said the zones threatened Syria's territorial integrity. "We want Syria to maintain its integrity," he said. "We are against the division of Syria. As for the agreements, we are not a party to that agreement and of course we will never be in favor (of it) as long as Iran is called a guarantor state."

Abu Zaid also said that there was "a huge gap" between Russia's promises and actions.

The Syrian opposition groups present at the Astana talks have protested Iran's participation in the talks, accusing the state of being a party to the war that has seen the deaths of up to 400,000 people with millions more displaced.

Some members of the Syrian opposition delegation in Astana shouted in protest and walked out of the conference room in protest at the signing of the memorandum. On Wednesday they had demanded a halt to the government's bombardment of opposition zones in Syria.

UN Syria envoy Staffan de Mistura had called on the rebel delegates to return to the talks in Astana "because what is important is also to look at the possibility of an outcome on a de-escalation."

No details have been given about how violence could be reduced in the designated areas. According to the document received by rebels on Wednesday, the areas were to be monitored by international observers and allow for the voluntary return of refugees.

US and Russia discussions

The US White House said President Donald Trump and Putin had discussed setting up safe zones when they spoke by telephone on Tuesday.  The United States sent a senior State Department official to the Astana talks for the first time. Russia's Tass news agency reported on Wednesday that Assistant US Secretary of State Stuart Jones met with Russia's representative at the talks.

Kazakh Foreign Minister Kairat Abdrakhmanov said the next Syria peace talks would be held in Astana in mid-July.