Russia has accused the US of "barbaric" bombardment of Raqqa, after US-backed forces took control of the city earlier this week. Forces on both sides are racing to reclaim land in Syria's oil-rich Deir el-Zour province. 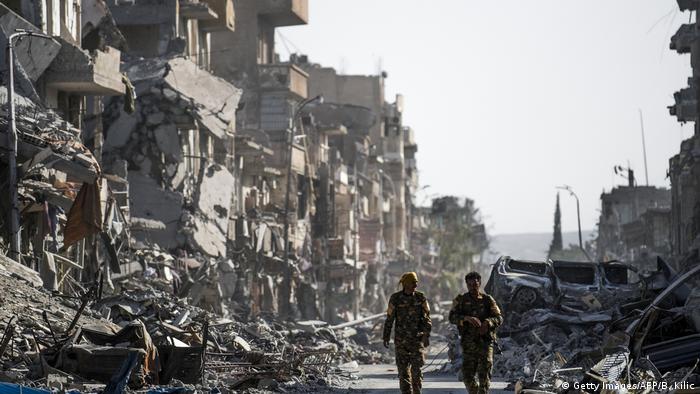 The US-backed Syrian Democratic Forces (SDF), an alliance of Kurdish and Arab fighters, on Sunday captured one of Syria's largest oil fields in the Deir el-Zour province. Riding on the heels of victory against the "Islamic State" (IS) militant group in Raqqa, the SDF is racing to seize parts of Syria's oil-rich province.

The news came as Russia's Defense Ministry accused the United States and its coalition partners of erasing Raqqa, the former IS stronghold, off the map, likening it to Allied bombing of Dresden during World War II. It claimed Western announcements of aid for the city seek "to hide evidence of the barbaric bombing."

Earlier, Kurdish-led forces announced they had taken full control of the Al-Omar oil field in eastern Syria after forces loyal to Syrian President Bashar al-Assad came under attack from IS militants.

The SDF added that pro-government forces were about 3 kilometers (1.86 miles) away from the oil field. The US-backed forces have been engaged in a monthslong campaign to uproot IS in Syria.

It was unclear how the Syrian regime, backed by Russia, Iran and Shiite militias, would respond to the seizure of the oil field. The regime has vowed to retake all the territory, and Deir el-Zour's oil wealth would be a key prize for Damascus.

Considered the largest of its kind in Syria, the Al-Omar oil field produced 30,000 barrels per day before the Syrian conflict erupted in 2011, when government forces launched a deadly crackdown on peaceful protesters calling for Assad to step down.

However, the US-led coalition against IS destroyed the oil field in 2015, after the militant group managed to make an estimated $5.1 million (€4.3 million) per month off oil sale revenues.

IS seized oil fields across the region, with black market oil comprising one of its revenue streams, alongside extortion and looting.

IS has lost most of the territory it managed to capture in 2014, when it launched a blitzkrieg campaign across Syria and Iraq.

Last week, the SDF announced it had liberated Raqqa, once considered the de facto IS capital, from which it staged mass beheadings and hatched plans for attacks on European soil. The monthslong offensive to retake the city, backed by US-led coalition airstrikes, has displaced more than 200,000 civilians and turned large parts of the city into rubble.

In a statement Sunday, Russia's Defense Ministry spokesman Major General Igor Konashenkov said thousands of civilians had been killed by the US and its coalition partners in the battle for Raqqa.

The United States and other powers have accused Russian and Syrian air forces of indiscriminate bombing, most notably in an offensive to retake Aleppo from rebels last year.