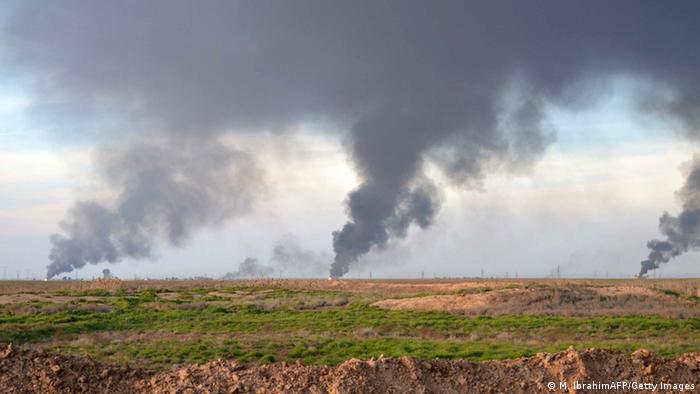 Munich's Süddeutsche (SZ) newspaper and two German public broadcasters NDR and WDR jointly reported Thursday that the BND had concluded that the IS had hardly any Iraqi oil to sell for cash or to even sustain supplies within its self-declared Caliphate.

They said a special report submitted to the German government attributed the reversal to counter-offensives in northern Iraq - by Kurdish Peshmerga fighters and the retaking of Tikrit city by Iraqi security forces and militias last week.

The SZ said IS had lost "at least three large oil fields," leaving it with only the small Qayara oil field, which had an output capacity of just 2,000 barrels a day, or 5 percent of what it previously controlled.

The IS, which still controls parts of neighboring Syria, overran western and northern areas of Iraq last June and declared its intention to establish an Islamist caliphate. That prompted US-led airstrikes in both countries.

The media outlets added that satellite imagery from last month showed that northeast of Tikrit the IS had set fire to two of three major Iraqi oil fields - Himrin and Ajil - and had destroyed oil extraction equipment as the counteroffensive unfolded.

The BND saw this as evidence that the IS did not believe in later recaptures of those oil fields.

The German Foreign Office, responding recently to an opposition Left party question in parliament, said the IS had a "capital stock" of "one to two billion dollars," making it one of the richest terror groups of all time.

IS income is reportedly supplemented by proceeds from activities such as smuggling of antiques and ransom demands.

On Wednesday, the IS released more than 200 members of Iraq's Yazidi ethnic minority who were seized in the Sinjar area last August.

Iraqi Prime Minister Haider al-Abadi said his government's "next battle" was to retake Anbar province, a vast desert area stretching between Iraq's borders with Syria, Jordan, and Saudi Arabia and across to the western approach to Baghdad.

A myriad of forces took part in the Tikrit recapture, including Iranian-backed Shiite militias.

"Islamic State" ("IS") militants have released more than 200 Yazidis in northern Iraq. The freed captives were reported to be in poor health, and showed signs of abuse and neglect. (08.04.2015)