Prime Minister Al-Abadi has called on Iraqi forces to oppose vandalism in the city of Tikrit, which was retaken from the 'Islamic State' this week. The city was "burnt in front of our eyes," local officials say. 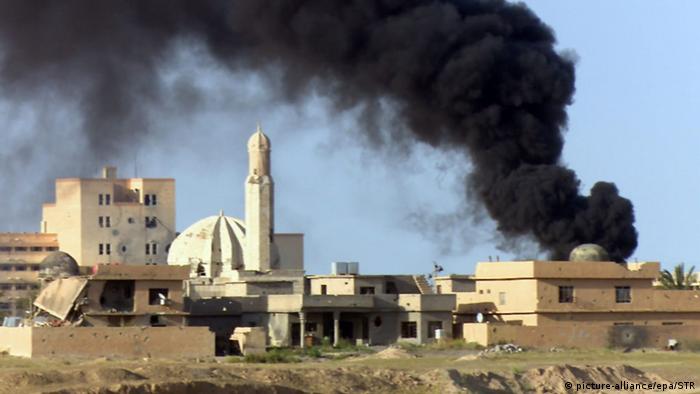 Sunni lawmakers accuse rogue elements within security forces of looting homes and government buildings in the city, alongside members of Shiite factions who fought for the city against the 'Islamic State'.

The head of Tikrit's governing council, Ahmed al-Kraim, claims "hundreds of houses" were set on fire over the last two days.

"Houses and shops were burnt after they stole everything," the official said.

"Our city was burnt in front of our eyes. We can't control what is going on," added Kraim, who left the city for Baghdad late Friday afternoon due to the chaos.

Paramilitary forces allegedly looted clothing and toiletries from shops. Militiamen have also admitted to burning down houses that belong to IS supporters in other recaptured regions.

Policemen from the rapid response units have written graffiti on the walls of Tikrit as well.

The troops are to "deal with cases of vandalism" carried out by "gangs" who seek to reverse the achievements of government forces and allied paramilitaries, read the statement he issued.

In addition, Abadi asked forces located in Tikrit to "preserve properties and facilities in Salaheddin province," of which Tikrit is the capital.

Prime Minister's spokesman Rafid Jaboori would not comment on specific incidents, but said Abadi had a policy of zero tolerance for any rights abuses.

Doing so is a "religious and national and moral duty," Sistani said in remarks read by his representative during Friday prayers in Karbala.

Additionally, "it has an important role in encouraging those who have not yet decided to participate in liberating their areas to decide to participate," he said.

"This is an important gain for all."

The Iraqi government pushed 'Islamic State' insurgents out of Tikrit on Wednesday after a month-long battle, which included US air strikes. The city had been occupied for almost ten months before the Iraqi army and federal police manage to recapture it, with support from Shiite paramilitary units.

On Thursday, Amnesty International said it was looking into alleged human rights violations by Iraqi forces and allied troops.

"We are investigating reports that scores of residents have been seized early last month and not heard of since, and that residents' homes and businesses have been blown up or burned down after having been looted by militias," said Rovera, a senior crisis response adviser at Amnesty.

"There have also been reports of summary executions of men who may or may not have been involved in combat but who were killed after having been captured," she said.

Iraq's prime minister says government troops have retaken central Tikrit from "Islamic State" militants. The month-long battle for the city is the government's largest military operation yet against the jihadist group. (31.03.2015)