Twelve suspected mass graves have been found in the city of Tikrit after Iraqi forces pushed "Islamic State" from the city. The victims were likely from June's massacre of 1,700 soldiers from nearby Speicher army base. 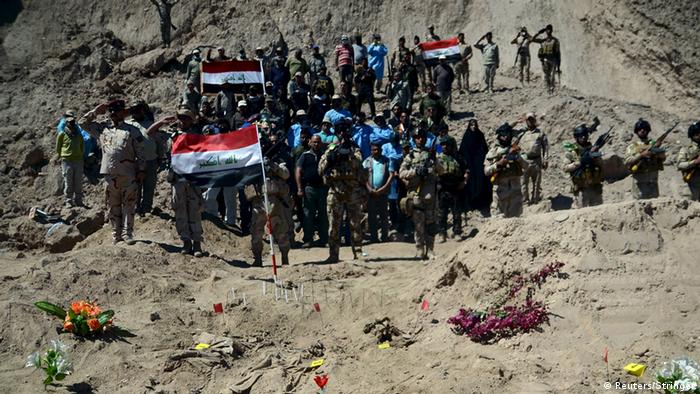 Excavation was underway on Tuesday following the discovery of mass graves in the Iraqi city of Tikrit last week, discovered by the military after retaking the city from "Islamic State" (IS) terrorists. The twelve suspected burial sites are thought to hold the bodies of as many as 1,700 soldiers massacred by the militants last June as the swept across northern Iraq.

The Speicher Massacre, named for the nearby army base where the mostly Shiite recruits were abducted, sparked a global outcry that helped rally support for the fight against IS. It has become a symbol for the brutality of the jihadists, and their hatred for Iraq's Shiite majority.

Images of the soldiers being machine-gunned by the hundreds, posted online by IS, could rank as the deadliest single act of violence during the past decade of sectarian war in Iraq.

The exhumation of the corpses came days after IS militants were driven out of late dictator Saddam Hussein's hometown by the Iraqi military and Shiite militias.

"We dug up the first mass grave site today," Khalid al-Atbi, a health official working with the forensic team in Tikrit, said on Monday. "Until now we found at least 20 bodies. Initial indications show indisputably that they were from the Speicher victims…it was a heartbreaking scene. We couldn't prevent ourselves from breaking down in tears. What savage barbarian could kills 1,700 persons in cold blood?"

The victims' families, despite their ire at the Iraqi political class for failing to provide them with proper answers, have welcomed the discovery for giving them closure.

"We are happy. At least the families will soon know the fate of their sons and cousins," Ali Hamad, whose cousin Kamal went missing at Speicher, told Reuters news agency.