'Islamic State': Will it survive a post-caliphate future?

Losing ground in its power base in the Middle East, the "Islamic State" militant group's future appears as open as ever. DW spoke to counter-terrorism experts and scholars to discuss the likelihood of its survival. 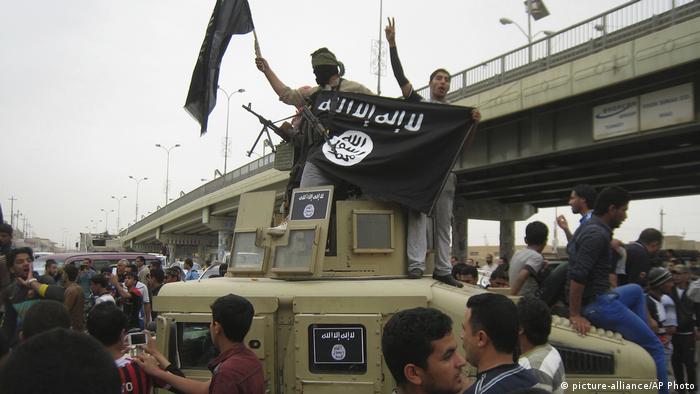 "I announce from here the end, the failure and the collapse of the state of falsehood and terrorism, which the 'Islamic State' declared from Mosul," said Iraqi premier Haider al-Abadi after a months-long campaign to drive the militant group from the strategic city.

While the devastating military campaign to liberate Mosul and Raqqa from the so-called "Islamic State" (IS) militant group proved successful, it has yet to spell the end for a band of militants that rallied together in 2006 and, a decade later, transformed into a global phenomenon.

In the wake of the victories in Iraq and Syria, international efforts have shifted to finalizing a military campaign against the militant group in Syria. The US-backed Syrian Democratic Forces, a Kurdish-led alliance of homegrown combatants, have liberated IS' de facto capital Raqqa, but hundreds if not thousands of fighters have managed to flee towards the Syrian-Iraqi border and elsewhere outside the region.

The militant group rose to notoriety in June 2014, when it launched a vicious military campaign and captured large swathes of territory in Iraq and Syria, culminating in the occupation of Mosul. By the end of the month, the group's leader Abu Bakr al-Baghdadi announced the establishment of a worldwide caliphate from the historic Great Mosque of Mosul.

"In my view, IS is at heart an Iraqi organization, so its defeat in Iraq will break its back, even if remnants continue here and there, or if violent individuals or groups in non-Arab countries use its name," Yezid Sayigh, senior fellow at the Carnegie Middle East Center told DW, referring to the group by an alternative acronym. 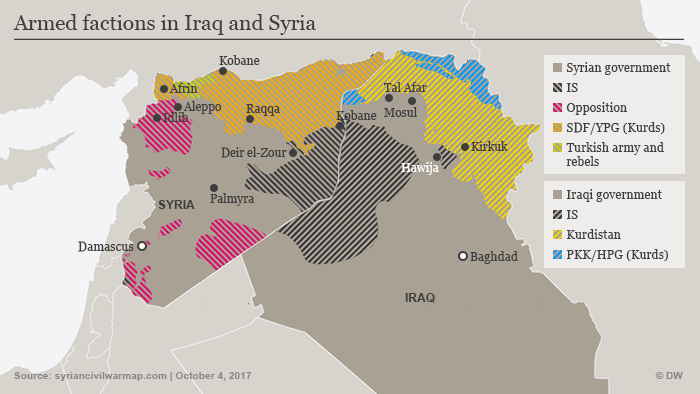 Despite its losses, the militant group continues to hold ground in parts of Iraq and Syria, especially near the border region. Tomas Olivier, counterterrorism and intelligence manager at the Netherlands-based Twickelerveld Intelligence and Investigations, told DW that even in the face of open conflict in Iraq and Syria, IS has managed to export its operational branches outside of the region to places in North Africa, Europe, Southeast Asia and Eastern and Western Africa.

"The most disturbing fact about the current IS organization is their flexibility in response, even after defeat, in which they apparently managed to establish a series of operational hubs throughout the Western hemisphere with the proven capability to - in military terms - strike 'on demand' or based on ideological motivation," Olivier said.

The former senior officer at the Dutch defense ministry added that while monitoring the group's latest online activity, he witnessed an increase in disconcerting messaging to commit attacks against the "crusaders" by any means necessary.

"IS is promoting a decentralized jihad with specific attention to lone wolf attacks in the West and against coalition targets throughout the world, from the streets of Manchester to Marawi in the Philippines," Olivier said.

The prospect of criminality

In the wake of the militant group's rise in 2014, more than 5,000 European nationals traveled to the Middle East to fight alongside IS. With the loss of territory in the region, international authorities have warned of the potential fallout of foreign fighters returning to their home countries in Europe and elsewhere.

A study published last year by the International Center for the Study of Radicalization and Political Violence at King's College in London showed that roughly half of all European foreign fighters had a criminal record prior to radicalization.

In its May issue, the IS magazine "Rumiyah" showcased terror tactics for supporters, calling on them to acquire weapons to commit attacks "by means of gun dealers and underground criminal networks - for those capable of attaining those connections." The article showed the group's willingness to use networks beyond its conventional or religious ones.

In fact, many of the militant group's members who committed attacks in Europe had a history of petty crime, including Berlin attack suspect Anis Amri and Salah Abdeslam, who handled logistics for the deadly 2015 Paris attacks.

Ian Oxnevad, a Middle East scholar at the University of California, Riverside, told DW that one counter-terrorism strategy to tackle the problem of returning foreign fighters is pushing them towards criminal activity by clamping down on their financial networks.

"For example, if you have former fighters with ISIS in a cell in northern Italy, but all the money they're using to sponsor terrorism isn't integrated into the financial system, they have to be able to maintain that funding. So they may turn to crime," Oxnevad said.

"If they're committing burglaries, bank robberies or black market auto parts trading, it increases their likelihood of being arrested as opposed to accepting donations."

While the prospect of IS' military defeat in Iraq and Syria has raised hopes for the militant group's end, the ideas that propelled it to notoriety continue to be accessible via social networks, digital repositories and online archives.

Oxnevad noted that even if the group is "gone off a map," that doesn't mean the ideology that propagates such extremism will cease to exist, especially given the statehood declaration made by al-Baghdadi in Mosul.

"You see it with neo-Nazi groups and the Third Reich, certain people in the American South and the Confederacy. Presumably you see the same thing in Russia with the Soviet Union," Oxnevad said.

"You have the idea of recapturing something that was lost, or at least recreating it. That is something that the world will just have to safeguard against in anyway possible."

Raqqa: The human cost of degrading the 'Islamic State'

An operation to recapture the militant group's stronghold in Syria has left scores of civilians dead. The increase in casualties has prompted an outcry for caution. DW examines the cost of recapturing the city. (15.06.2017)