"Islamic State" militants have blown up the al-Nuri mosque in Mosul where their leader, Abu Bakr al-Baghdadi, declared a self-styled caliphate in 2014. It comes as Iraqi forces push into Mosul's Old City.

The so-called "Islamic State" (IS) destroyed Mosul's Grand al-Nuri mosque and its iconic leaning minaret late Wednesday, according to Iraq's Ministry of Defense.

"The Daesh (IS) terror gangs committed another historical crime by blowing up the al-Nuri mosque and its historical al-Hadba minaret," the Iraqi military statement said. 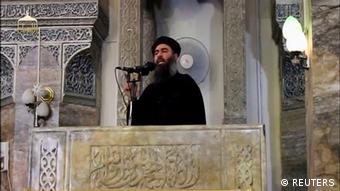 The landmark, also known as Mosul's Great Mosque, is where IS leader Abu Bakr al-Baghdadi proclaimed a "caliphate" in Syria and Iraq - and named himself "caliph" - in mid-2014 shortly after the city was captured by the militants. It was the only time he has appeared in public.

"It's an official declaration of defeat," Haider al-Abadi said in a statement issued hours after news broke of the mosque's destruction.

Amaq, the IS news agency, blamed the destruction on a US airstrike. But a spokesman for the US-lead coalition denied striking the mosque. "We did not strike in that area," coalition spokesman Colonel John Dorrian told Reuters.

"The responsibility of this devastation is laid firmly at the doorstep of ISIS," said a statement from the commander of the coalition's ground component, US Army Major General Joseph Martin, using another acronym for IS.

Iraqi troops backed by US airpower launched a push earlier this week to drive out IS fighters surrounded in Mosul's Old City, after retaking several neighborhoods in western Mosul over the past few weeks.

The last militants are holed up in the Old City along with an estimated 100,000 civilians, according to the United Nations.

More than 850,000 people have been displaced since the offensive to retake Iraq's second-largest city began eight months ago.

The UN says it has credible reports that "Islamic State" (IS) has killed more than 231 civilians in the Iraqi city of Mosul city since May 26. The UN body is also investigating civilian deaths in anti-IS airstrikes. (08.06.2017)

IS leader Abu Bakr al-Baghdadi has released his first video in nearly a year. In it, he rallies fighters in Mosul and urges attacks on Saudi Arabia and Turkey. (03.11.2016)