Abu Bakr al-Baghdadi, the leader of the terror group ISIS that is in control of much of Iraq and Syria, has issued a first video appearance since the group named him "caliph" of what they call an "Islamic State". 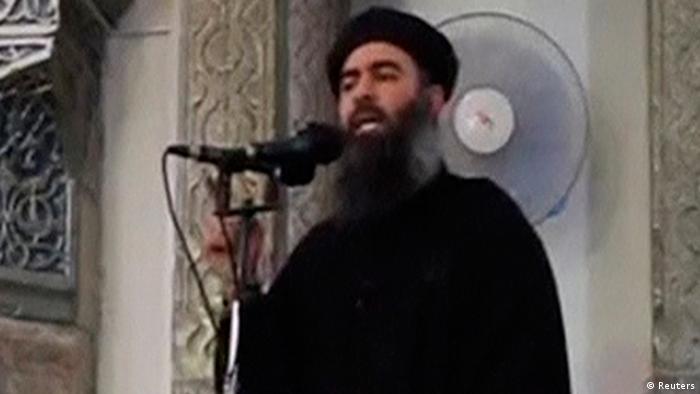 The 21-minute video showed a man claiming to be al-Baghdadi deliver a sermon at a mosque in Mosul, Iraq's second-most populous city currently controlled by the Islamic State in Iraq and Syria (ISIS). ISIS last week changed its own name to "Islamic State," declaring al-Baghdadi "caliph," or political and religious leader, of all Muslims.

Al-Baghdadi called it a "burden" to accept this position.

The ISIS leader spoke in classical Arabic in the Al-Nur mosque, Mosul's largest.

Al-Baghdadi, believed to have been born in the Iraqi city of Samarra in 1971, is thought to have joined the insurgency against the US military following the 2003 invasion that ousted Saddam Hussein. He spent time in a US military prison before eventually taking over leadership of the group also sometimes referred to as ISIL, the Islamic State in Syria and the Levant. ISIS was once allied to al Qaeda and thought to be on the ropes as an entity. The terror group managed to establish a prominent role among the factions fighting Syrian President Bashar al-Assad's forces, and later broke ties with al Qaeda.

The lightning advance through Iraq last month shocked the region and the world, and analysts said al-Baghdadi's appearance in central Mosul was a sign that ISIS was confident in the territory it holds.

"The fact that he has done this without any consequences in Mosul's biggest mosque is a sign of [ISIS'] power within the city," Aymenn al-Tamimi, an expert on militant factions in Syria and Iraq, said. Al-Tamimi also said that al-Baghdadi had no real choice but to appear having declared himself "caliph." The position, abolished at the end of the Ottoman Empire by Turkey's Mustafa Kemal Atatürk in 1924, used to demand a prominent public presence.

Others have strongly questioned the legitimacy of the ISIS announcement of a new "caliph."

Influential Sunni Muslim scholar Yusef Al-Qaradawi warned that the establishment of a caliphate by "a group known for its atrocities and radical views does not serve the Islamic Prophet," adding that the title caliph can only be awarded "by the entire Muslim nation," not a single group.

ISIS has garnered a reputation for particularly brutal tactics in its advance, with photographs published on Saturday showing its militants demolishing Sunni and Shiite mosques and shrines in and around Mosul.

Iraq has sought international assistance in the fight against ISIS, with Washington sending military advisers but rejecting requests for airstrikes against the militants. The advance has put Prime Minister Nuri al-Maliki, seeking a fourth term in office, under severe pressure. Maliki's security spokesman on Saturday told the AFP news agency that a senior military and police chief had both been sacked.

Forty-six Indian nurses who had been held by the Islamic State of Iraq and Syria (ISIS) have returned home. Hundreds of friends and relatives of the women greeted them with hugs, flowers and "Welcome Home" banners. (05.07.2014)