Images posted online show the demolition of ancient shrines and mosques in northern Iraq, apparently by Sunni jihadists. The destruction has been confirmed by residents of the cities of Mosul and Tal Afar. 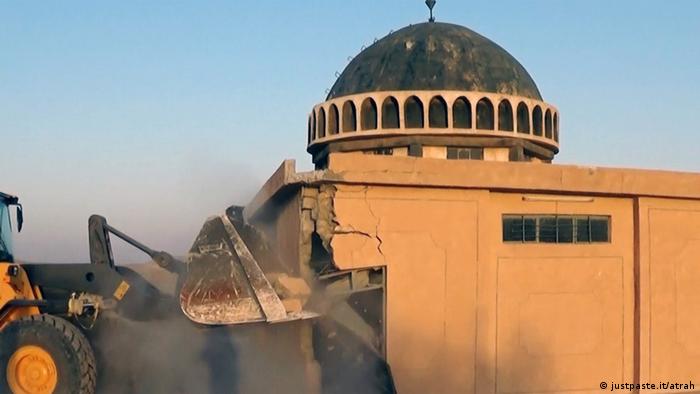 Images emerged on Saturday purporting to show that Islamist militants, who seized parts of northern and western Iraq last month, had destroyed at least 10 shrines and mosques in the province of Nineveh.

Residents of Mosul, which is the capital of Nineveh, said the militants had also occupied two cathedrals belonging to Chaldean and Orthodox Christians.

Crosses on their frontages had been replaced by the black flag of the Islamic State of Iraq and Syria (ISIS), the group which recently declared itself to be an "Islamic State."

A shakeup in the Iraqi army, which did little to counter the militants' advance last month, appeared to be underway on Saturday.

Iraq's most senior Christian leader, Chaldean Patriarch Louis Sako, appealed on Saturday for the release of two nuns and three orphans who went missing on Tuesday in Mosul.

He appealed to "scholars in Mosul and tribal sheikhs" to help locate the five and arrange their release, according to the news agency AFP.

"We lived together side-by-side (with Muslims) for 14 centuries. We still want to communicate and live together," Sako said.

Qatar-based Sunni Muslim scholar Yusef al-Qaradawi on Saturday declared as "void" the establishment of an Islamic caliphate by ISIS.

Al-Qaradawi said that ISIS leader Abu Bakr al-Baghdadi's move to create a caliphate failed to meet the strict conditions set under Shariah law. The Qatari scholar condemned ISIS attempts to establish an "Islamic State," saying it would have "dangerous consequences for the Sunnis in Iraq and for the revolt in Syria."

A video emerged in social media on Saturday, purportedly showing the elusive Baghdadi ordering all Muslims to obey him while delivering a sermon on Friday in Mosul.

A judicial spokesman for the Yazidi faith, Chaery Chider Husaen, told the German DPA news agency on Saturday that ISIS "kill everyone: Yazidi, Christians and even Muslims." The Yazidi faith is a pantheistic religion.

Western-backed rebels in Syria issued a statement via Beirut on Saturday, saying Syria risked a "humanitarian disaster" if allies did not send more aid to help moderate forces stop advances of ISIS fighters inside Syria.

Forty-six Indian nurses who had been held by the Islamic State of Iraq and Syria (ISIS) have returned home. Hundreds of friends and relatives of the women greeted them with hugs, flowers and "Welcome Home" banners. (05.07.2014)