The so-called "Islamic State" has heralded the creation of its own coin currency cast in precious metals. DW spoke with a threat finance scholar to examine its role as a tool for money laundering and propaganda. 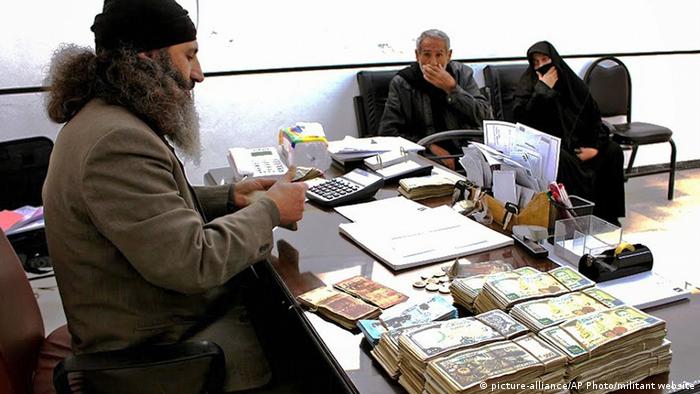 Two Syrian citizens sit in the office of an inheritance judge of the "Islamic State" militant group in Raqqa, Syria

In a rare speech, the militant group's chief Abu Bakr al-Baghdadi has called for fighters to stand their ground in Mosul. DW spoke to Hassan Hassan, co-author of "ISIS: The Army of Terror," to examine the implications.

The Kurdish peshmerga forces have stopped on the outskirts of Mosul under an agreement with Baghdad. DW speaks with Tomas Olivier of the security consultancy Lowlands Solutions to find out why. (02.11.2016)

In September 2015, the "Islamic State" (IS) released a video entitled "Rise of the Khilafah: Return of the Gold Dinar." In it, IS criticized the banknote for allegedly displacing "gold and silver, which Allah created as the standard mediums of exchange for the purchase of goods and services."

The militant group announced the creation of its own currency in what it described as an effort to uproot a "financial system of enslavement" and adhere to the religious tenets of Islamic finance.

However, with Iraqi forces pushing into the heart of Mosul, where the militant group in 2014 acquired more than $400 million (376 million euros) in cash and a "large quantity of gold bullion," the group's supply of precious metals is increasingly under threat.

DW spoke with Ian Oxnevad of the University of California, Riverside about the challenges presented by the currency and what its future may look like.

Deutsche Welle: Why has IS minted gold and silver coins?

Ian Oxnevad: It serves two purposes. One is that it allows them to use money as propaganda, in a sense that minting coins is a very provocative step. I believe it's the first terrorist group in history to mint its own money.

In that sense, it's a publicity tool, because money carries political weight even beyond its economic value. You have faces of presidents and monarchs on currencies, so there's a sense of identity, and the "Islamic State" is no different. They've tried to link what they're doing to the past, in terms of Islamic monetary history and Sharia law as it applies to economics.

The other reason to mint coins is that gold is good for money laundering. It carries a lot of value. Essentially, any currency has to fulfill three purposes. It has to be a unit of account, it has to hold value and it has to be a means of exchange. Gold does that. It's easily transferable; you can likely go anywhere in the world and convert gold into cash.

You can pay foreign fighters from anywhere in the world in gold, and they can convert it back to the currencies of their countries of origin, allowing them integrate it into the normal economy.

For example, a French IS fighter could be paid in gold, then return to Paris, melt the coins so they don't look like "Islamic State" coins, and convert the gold to cash, which they could use to buy a car or put in a bank. 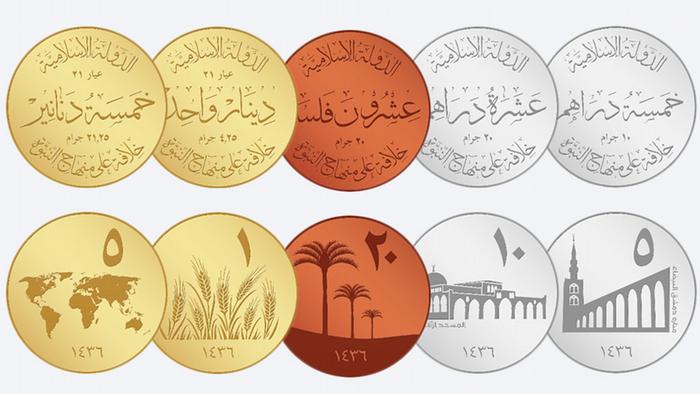 In 2015, the "Islamic State" announced the creation of its own gold, silver and copper coins

So it sounds like it's relatively easy for IS currency to enter the financial system?

The group can sell any number of assets they have, whether that's looted antiquities or excess guns, and can always use that to get more gold or other cash. If they scatter, and it becomes a traditional terrorist network, they can always integrate those resources into the economy.

Money laundering essentially has three phases. It has a placement phase, in which you're essentially placing the money or the value into the economy. Then it has a layering phase, in which you're distancing that illicitly-gained money or that illicitly-gained value from its illicit source, so it could be transferred from one form of currency to another or one form of value to another.

It could be transferred through shell companies, through jewelry or art, or it could just be through cash. Cash is generally the ultimate goal. It's virtually untraceable. Then, when it gets integrated, it actually goes back to the normal economy.

Going back to our hypothetical Paris fighter: they return, they convert the gold to cash, or they melt it down themselves and turn it into a lump of gold that they say they inherited. There's virtually no way to trace that, that'll be part of the layering. But once they get the cash, they could invest that into a business or turn it into a check. If there's a casino, they could launder it even more, and then buy a house, theoretically. That's the integration phase: it's integrated into the economy.

Are there mechanisms that authorities could use to prevent these coins from entering the economy?

I think it's harder with gold because gold is so untraceable. Banks are increasingly on the lookout for illicit finance, especially with what's happening in Europe. It began here in the US, and then after 9/11, after the crackdown here, a lot of illicit finance went to Europe.

Any effective mechanisms would need an increase of regulatory scrutiny, and also more intelligence and law enforcement cooperation on the ground. But that's a tall order. It's not just about catching the fighters and taking away their territory, it's also about taking away their portfolio territory, making it harder for them to move money and to store value.

In that sense, the financial sector is a sort of strategic terrain on its own, and I'm not sure that has been conceptually thought of yet.

Ian Oxnevad is a doctoral student in political science at the University of California, Riverside and co-author of the book "Middle East Politics for the New Millennium: A Constructivist Approach."