A US-backed alliance of militias said "Islamic State" (IS) fighters have evacuated the city of Raqqa under an agreement to release captive civilians. US-backed forces have almost completely captured Raqqa. 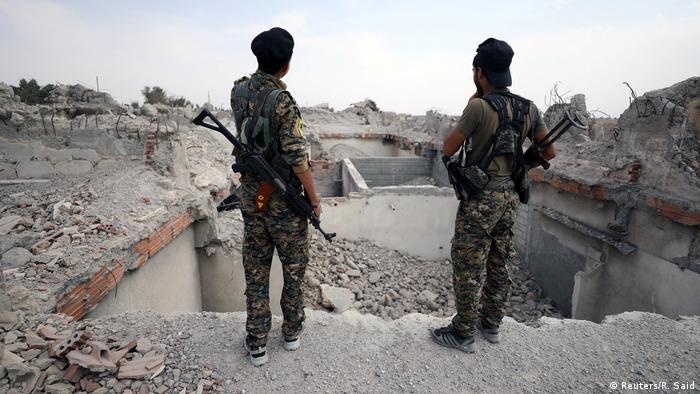 The US-backed Syrian Democratic Forces (SDF), an alliance of Kurdish and Arab militias, on Sunday launched their final assault against the remaining "Islamic State" (IS) fighters in the northern Syrian city of Raqqa .

On Saturday, the SDF had agreed to a proposal that allowed Syrian IS jihadists to leave the city in exchange for the release of civilians held by the militants. However, IS' foreign fighters were excluded from the evacuation deal.

"Last night, the final batch of fighters (who agreed to leave) left the city," said SDF spokesman Mostafa Bali, adding that no foreign fighters had left the city. The SDF later said in a statement that around 275 local fighters and their families had left as part of the deal.

"The final battle will continue until the entire city is cleansed of terrorists, who have refused to surrender," the SDF said.

However, Omar Alloush, an official in the Raqqa Civilian Council, disputed the SDF's claim and said a batch of foreign jihadists had also departed with the convoy of local militants. 'Our aim is liberation'

The US had earlier protested a safe exit for the extremist group. Defense Secretary Jim Mattis said Friday the US would accept the surrender of IS militants who would be interrogated for intelligence purposes.

The tribal leaders said they appealed to the coalition and the SDF to allow IS fighters to leave the city to stem further violence.

"Because our aim is liberation, not killing, we appealed to the SDF to arrange for the local fighters and secure their exit to outside of the city with our guarantees," the tribal chiefs said in a statement.

IS had seized Raqqa as part of a broad offensive in Syria and Iraq in early 2014, and the city has since served as the jihadists' primary Syrian stronghold.

But IS has lost much of its territory after US and Russian-backed forces began separate offensives against the militant group. In July, US-backed Iraqi forces retook Mosul, the jihadists' de facto capital in Iraq.

Raqqa has practically fallen to the US-led coalition, but it is unclear how many militants are still in the city. There have been reports of continued fighting between SDF fighters and IS jihadists in some parts of the city.

A spokesman for the US-led coalition, Colonel Ryan Dillon, said Saturday that around a hundred IS militants had already surrendered and been "removed" from the city since Friday.

"We still expect difficult fighting in the days ahead and will not set a time for when we think 'Islamic State' will be completely defeated in Raqqa," he said.

But the Syrian Kurdish militia YPG told Reuters that coalition forces could clear the city of IS forces within days.

"The battles are continuing in Raqqa city. Daesh (IS) is on the verge of being finished. Today or tomorrow the city may be liberated," YPG spokesman Nouri Mahmoud said.

More defeats for IS

Separately, the Syrian government and allied Shiite militia retook the town of Mayadeen from IS after intense fighting and Russian airstrikes, the Syrian military said Saturday.

Located along the Euphrates River near the Iraqi border, Mayadeen had been a strategic IS stronghold as the group lost territory in Syria and Iraq.

Pro-Syrian regime forces have been trying to secure the Iraqi border and push IS out of a small pocket in the provincial capital, Deir al-Zor.