With a "hard core of foreign fighters," the notorious militant group has positioned itself for its last stand in Raqqa. The US-led coalition against "Islamic State" has rejected any negotiated withdrawal of militants. 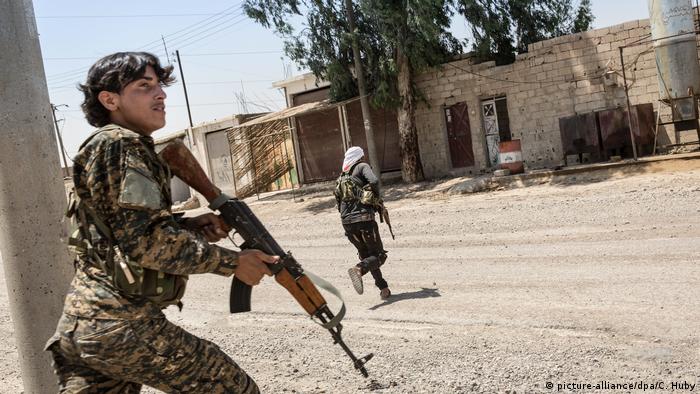 As the fight to liberate the Syrian city of Raqqa from the "Islamic State" militant group draws to an end, its remaining fighters are expected to hold out "until the end," according to Colonel Ryan Dillon, spokesperson for the US-led coalition against the group.

Dillon added that there are up to 400 militants believed to be left in the city, mostly concentrated in Raqqa's historic center, where IS staged beheadings and crucifixions.

"The foreign fighters, we fully expect them to fight until the end – there's a hard core of (foreign) fighters," Dillon said. "But we have seen a rate of four to five ISIS fighters surrendering a week, including emirs – local leaders within Raqqa – over the past month."

In June, the US-backed Syrian Democratic Forces (SDF), an alliance of Kurdish and Arab fighters, began its offensive by surrounding the city and launching a multi-pronged assault with the help of aerial support from the US-led coalition.

According to UN estimates, up to 8,000 civilians may still be trapped in Raqqa. The US-led coalition said the Raqqa Civic Council – a provisional administration set up by the SDF to govern after the fall of IS – has attempted to negotiate the release of civilians, fearing they may be used as human shields.

"The Raqqa Civil Council is leading discussions to determine the best way to enable civilians trapped by Daesh to exit the city, where some are being held as human shields by the terrorists," the coalition said in a statement, referring to IS by its Arabic acronym.

"Those departing Raqqa who are found to have fought for Daesh will be turned over to local authorities to face justice."

IS has seen its territories in Iraq and Syria diminish drastically over the past year as the militant group faced multiple offensives from global powers and regional actors. Iraqi-led forces liberated Mosul earlier this year, marking a major victory over the militant group.

In 2014, the militant group rose to notoriety when it launched an offensive across Iraq and Syria, culminating in the occupation of Mosul, where IS leader Abu Bakr al-Baghdadi announced the establishment of a global caliphate in a historic mosque.

While IS has lost significant portions of territories it captured, European authorities have warned of the knock-on effect it could have, with returning foreign fighters posing a major threat to public safety.